Akira Taue (田上 明, Taue Akira) (born May 8, 1961) is a Japanese retired professional wrestler. He is also a former AJPW Triple Crown Heavyweight Champion, a former GHC Heavyweight Champion and has had fourteen 5 Star Matches as awarded by the Wrestling Observer Newsletter.

On the 8th of May, 1961 Akira Taue was born the eldest son of a construction worker, in Saitama, Japan. As a teenager and young adult in Kagemori Junior High School, Taue was quite active in various sports such as shotput, baseball and judo. After graduating Taue would work as a part time auto-mechanic, while attending the Saitama Prefectural Chichibu High School. There Taue was sent a recommendation for the high school's sumo club. He joined the club in his second year of high school, and he won the third place in the national sumo high school championship.

Taue was then invited in the Oshiogawa stable, and made his professional sumo debut, in January of 1980.For the first six years of Taue's sumo career he went under his real name, until May of 1986, when he was promoted to the rank of Juryo, he was given the shikona of Tamakirin Yasumasa. He fought in the second highest juryo division for seven tournaments before retiring from sumo in July 1987.

After his debut, Taue would mostly wrestle in the tag team division of All Japan. During this time he along with Shinichi Nakano would win the All Asia Tag Team Championship belts on June 5th, 1990. After many from All Japan's roster would leave for Genichiro Tenryu's new promotion, the SWS, Taue would band with Mitsuharu Misawa, Kenta Kobashi and Toshiaki Kawada to form the Super Generation Army. Soon after their formation, Taue would defect to Jumbo Tsuruta's stable, otherwise known as Tsuruta-gun. The ensuing rivalry between the Super Generation Army and Tsuruta-gun would produce all time tag team, and 6-man tag team classic matches. On September 30th, 1990, the Wrestling Observer Newsletter would award Taue and Tsuruta versus Misawa and Kawada, 5 stars.

In Noah Taue continued tag team wrestling, teaming mostly with Takuma Sano. On November 5, 2005, Taue was able to defeat Takeshi Rikio with his Ore ga Taue finisher to capture the GHC Heavyweight Championship, which he held into the new year before losing it to Jun Akiyama on January 22, 2006.

On June 27, 2009, following the June 13 death of Mitsuharu Misawa, Akira Taue was appointed as the new president of Pro Wrestling Noah. On May 12, 2013, Taue announced that he would be officially retiring from the ring in December. [3] On December 7, 2013, Taue wrestled his retirement match, where he, Takeshi Morishima, Takashi Sugiura, and Genba Hirayanagi defeated Genichiro Tenryu, Tatsumi Fujinami, Masao Inoue, and Kentaro Shiga, with Taue pinning Inoue for the final win of his career. [2]

Taue served as the Noah president until November 1, 2016, when the company was sold to IT development company Estbee, after which he was given the new role of an advisor. [4] He would resign from his position in February 2017.

In June 2017, after studying with Mitsuhiro Matsunaga, Taue opened his own steakhouse in Tsukuba, Ibaraki, Japan, called Steak Izakaya Champ, where he personally cuts and cooks the steak, as well as greeting customers.

On August 22, 2018, Taue announced at a press conference that he was battling stomach cancer. The diagnosis came from when he was originally hospitalized from a fall at his home on March 2 that caused bleeding from the stomach, which required an emergency blood transfusion. He also revealed that on April 16, he underwent a gastrectomy after discovering the cancer during an examination. [5]

All Japan Pro Wrestling (AJPW/AJP) or simply All Japan is a Japanese professional wrestling promotion established on October 21, 1972 when Giant Baba split away from the Japanese Wrestling Association and created his own promotion. Many wrestlers had left with Baba, with many more joining the following year when JWA folded. From the mid-1970s, All Japan was firmly established as the largest promotion in Japan. As the 1990s began, aging stars gave way to a younger generation including Mitsuharu Misawa, "Dr. Death" Steve Williams, Kenta Kobashi, Gary Albright, Toshiaki Kawada, Mike Barton and Akira Taue, leading to perhaps AJPW's most profitable period in the 1990s.

Mitsuharu Misawa was a Japanese amateur and professional wrestler and promoter. He is primarily known for his time in All Japan Pro Wrestling (AJPW), and also for forming the Pro Wrestling Noah promotion in 2000. In the early 1990s, Misawa gained fame alongside Toshiaki Kawada, Kenta Kobashi, and Akira Taue, who came to be nicknamed AJPW's "Four Pillars of Heaven", and whose matches developed the ōdō style of puroresu and received significant critical acclaim. Despite never working in the United States during the 1990s, Misawa had significant stylistic influence upon American independent wrestling, through the popularity of his work among tape-traders in the country. Misawa is widely regarded as the greatest professional wrestler of all time. However, the physical demands and consequences of the style in which he worked and the circumstances of his death have made his legacy, or at least that of ōdō, somewhat problematic. 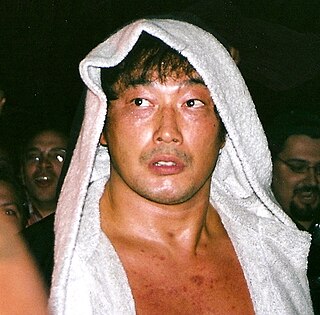 Kenta Kobashi is a Japanese retired professional wrestler. He started his career in All Japan Pro Wrestling (AJPW) in 1988, where he became one of the promotion's top stars, holding the Triple Crown Heavyweight Championship three times, and winning the Champion Carnival in 2000. Kobashi left All Japan in June 2000, taking part in a mass exodus led by Mitsuharu Misawa, which led to the formation of Pro Wrestling Noah. Kobashi worked for Noah for thirteen years, and became the longest reigning GHC Heavyweight Champion of all time, holding the championship for 735 days between 2003 and 2005, a record that stands to this day. He was a four-time world champion.

Jun Akiyama is a Japanese professional wrestler currently signed to DDT Pro-Wrestling, where is the current KO-D Openweight Championship in his first reign. He is best known for his time working for All Japan Pro Wrestling (AJPW), where he was the president, representative director, co-head booker, and an in-ring performer. In AJPW, he is a former two-time Triple Crown Heavyweight Champion, while also being a five-time overall professional wrestling world champion.

Toshiaki Kawada is a Japanese semi-retired professional wrestler best known for his work in All Japan Pro Wrestling (AJPW), whom he worked for from his debut in 1982 up until 2008. In All Japan, he was a 5 time Triple Crown Heavyweight Champion, a 9 time World Tag Team Champion, three time winner of the Real World Tag League and a two time winner of the Champion Carnival. He was also recognised as the ace of the promotion from 2000–2005.

Takeshi Inoue known by his stage name Takeshi Rikiō, is a Japanese retired professional wrestler, who worked for Pro Wrestling Noah. He is also a former sumo wrestler.

Masanobu Fuchi is a Japanese professional wrestler currently signed to All Japan Pro Wrestling (AJPW), where he is also a director and the co-head booker. Fuchi has exclusively worked for All Japan since his debut in 1974, and holds the record for the longest World Junior Heavyweight Championship reign at 1309 days. Fuchi became a freelancer in 2009, but officially re-signed with AJPW in 2013 as both a director and wrestler, making him the longest tenured member of the All Japan roster.

Richard Aslinger is a retired American professional wrestler, known by his ring name Richard Slinger. Slinger was a long-time mainstay of All Japan Pro Wrestling and later Pro Wrestling Noah, where he was one of two gaijin heels to compete in the promotion. He is also one of several Noah wrestlers to be featured in the Japanese video game King of Colosseum II.

The Holy Demon Army (HDA) was a professional wrestling tag team consisting of Toshiaki Kawada and Akira Taue. The HDA competed in All Japan Pro Wrestling during the 1990s and is considered the most successful and dominant team in the history of All Japan as they held the World Tag Team Championship a record six times, as well as having won the World's Strongest Tag Determination League on two occasions.

The Champion Carnival is a professional wrestling tournament held by All Japan Pro Wrestling (AJPW). The tournament is also known by the nickname Haru no Saiten and is sometimes abbreviated to CC. Created by AJPW founder Giant Baba, the tournament has been held annually since 1973 and is the longest-running singles tournament in professional wrestling, while also ranking as the most prestigious event in the AJPW calendar. It is considered a successor to the World League, held by Japan Pro Wrestling Alliance (JWA) between 1959 and 1972, predating the New Japan Pro-Wrestling (NJPW) G1 Climax tournament by a year.

Destiny was a major professional wrestling event produced by Pro Wrestling Noah. The event took place on July 18, 2005 at the Tokyo Dome in Tokyo, Japan, and marked Noah's second event to take place in the arena, after 2004's Departure. 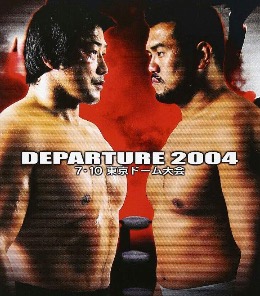 Departure was a major professional wrestling event produced by Pro Wrestling Noah. The event took place on July 10, 2004 at the Tokyo Dome in Tokyo, Japan, and marked Noah's first ever show in the arena.

This is a list of Japanese professional wrestler Mitsuharu Misawa's championships and accomplishments. Misawa (1962-2009) debuted for All Japan Pro Wrestling (AJPW) in 1981, and began work as the second incarnation of the Tiger Mask gimmick in 1984. He achieved some success as the character, but when he unmasked mid-match in May 1990, Misawa was pushed to the top of the company, and became one of AJPW's most decorated wrestlers of the 1990s. When he led a mass exodus to start his promotion Pro Wrestling Noah, he continued to have great success until his death in an in-ring accident. Misawa also received significant critical acclaim from domestic and international publications throughout his career.