Akkitham Achuthan Namboothiri (18 March 1926 – 15 October 2020), popularly known as Akkitham, was an Indian poet and essayist who wrote in Malayalam. He was known for a simple and lucid style of writing, exploring themes of profound love and compassion in his works. [1] Some of his prominent works included Irupatham Noottandinte Ithihasam (English: Epic of the 20th century), Balidarshanam (English: The vision of Bali), and Nimisha Kshetram (English: Holy moment). [1]

Akkitham Achuthan Namboothiri was born on 18 March 1926 at Amettikkara, near Kumaranellur in Palakkad district of the south Indian state of Kerala to Amettu Akkithathu Manayil Vasudevan Namboothiri and Checkur Manaykkal Parvathy Antharjanam. [4] After schooling in Sanskrit, Astrology and Music, he started his college education but did not complete his graduate degree course. [5]

Akkitham started his career as an editor of Unni Namboothiri magazine, which he used as a platform for his social activities. He also worked as an assistant editor at Mangalodayam and Yogakshemam magazines. In 1956, he joined the Kozhikode station of the All India Radio (AIR) where he served until 1975 after which he was transferred to the Thrissur station of the AIR. He was also associated with Anaadi, a literary initiative for popularising studies of Vedas. [5]

His literary works began to gain wide attention in the early 1950s and Irupatham Noottandinte Ithihasam (English: "Epic of the 20th Century"), a khandakavya is one of the first truly modernist poems in Malayalam literature, the book also won the Sanjayan Award in 1952. [6] He published approximately 45 books comprising poetry anthologies, plays and short stories. Balidarsanam (English: "The Vision of Bali"), Arangettam, Nimisha Kshetram, Idinju Polinja Lokam, Amritaghatika, and Kalikkottilil are some of his notable poetry anthologies. Upanayanam and Samavarttanam, two collections of essays, feature among the writings in prose. Sree Mahabhagavatham, his translation of Srimad Bhagavatam, composed of 14,613 verses, covers over 2,400 pages. [6] Some of the themes that Akkitham explored in his works included love and compassion. [1] He is acknowledged to have introduced 'meaningful modernism' as a central theme in his poetry. [7]

Akkitham was involved in social reform activities and through his association with Yogakshema Sabha, he strived to bring in reforms in the lives of the Namboothiri Brahmins of Kerala. He was associated with various centres in Thirunavaya, Kadavallur and Thrissur, for the promotion of vedic studies. He was also associated with the Paliyam satyagraha, a peaceful protest against untouchability in 1947. [6]

The next major honour for Akkitham came by way of Vayalar Award which he received in 2012. [14] The Government of Kerala awarded him Ezhuthachan Puraskaram, their highest literary award in 2016. [15] [16] [17] He received Padma Shri, the fourth highest civilian award of the Government of India in 2017. [18] [19] He could not attend the investiture ceremony due to ill health and the award was later handed over to him by the district collector of Palakkad. [20] He received the Jnanpith Award, the highest Indian literary award, in 2019. [21] Reflecting on his lifetime contribution to Malayalam literature, the Jnanpith Award citation specifically noted him as "A poet of rare integrity" and noted that his poetry reflected "unfathomable compassion, imprints of Indian philosophical and moral values and a bridge between tradition and modernity, and delved deep into human emotions in a fast changing social space." [22]

He was also a recipient of several other honours such as Krishna Geedhi Award, Nalappad Award, Puthezhan Award, Moorti Devi Award of Bharatiya Jnanpith and Amrita Keerti Puraskar (2004). Arikil Akkitham is a documentary film directed by E. Suresh, which details the life of the poet from the perspective of his daughter, Sreeja. [23]

Akkitham was married to Sreedevi Antharjanam and the couple had two sons, Narayanan and Vasudevan, and four daughters Sreeja, Indira, Parvathy and Leela. The family lives in Amettikkara. [24] Antharjanam, died on 13 March 2019, at the age of 85. Noted painter Akkitham Narayanan is his younger brother. [23] 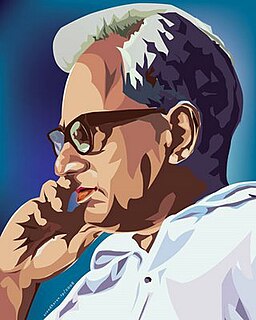 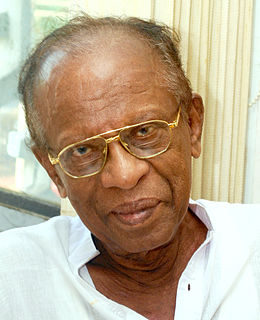 Koloth Thattarath Sukumaran, popularly known as Sukumar Azhikode was an Indian academic, orator, critic and writer of Malayalam literature, known for his contributions to Malayalam language and insights on Indian philosophy. He was a scholar in Sanskrit, Malayalam, and English languages and his work, Tatvamasi, published in 1984, is a notable work for its detailed interpretation of Indian philosophy, Vedas and Upanishads. He was a recipient of several honours including Sahitya Akademi Award, Kerala Sahithya Akademi Award, Vayalar Award, Vallathol Award and Ezhuthachan Puraskaram, the highest literary award of the Government of Kerala. The Government of India awarded him the fourth highest civilian honour of the Padma Shri in 2007, which he refused citing the award was a discrimination.

Sankaran Kutty Kunjiraman Pottekkatt, popularly known as S. K. Pottekkatt, was an Indian writer of Malayalam literature and a politician from Kerala, India. He was also a great traveller among the Keralites, who wrote many travelogues for the people who have been unintroduced to the outside world. He was the author of nearly sixty books which include ten novels, twenty-four collections of short stories, three anthologies of poems, eighteen travelogues, four plays, a collection of essays and a couple of books based on personal reminiscences. he was a recipient of Kerala Sahitya Akademi Award for Novel, Sahitya Akademi Award and the Jnanpith Award. His works have been translated into English, Italian, Russian, German and Czech, besides all major Indian languages. 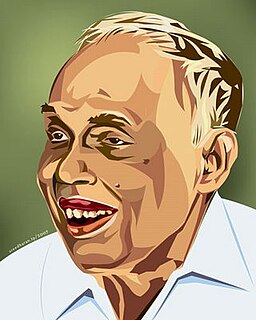 Sugathakumari is an Indian poet and activist, who has been at the forefront of environmental and feminist movements in Kerala, South India. Her parents were the poet and freedom fighter Bodheswaran and V. K. Karthiyayini, a Sanskrit scholar. She is influenced by her poet father's social activism and nationalistic fervour. 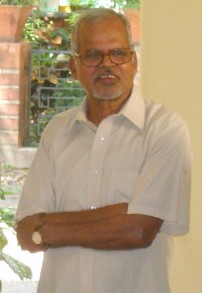 Thinakkal Padmanabhan, popularly known as T. Padmanabhan, is an Indian short story writer of Malayalam literature. He is a recipient of several awards including the Ezhuthachan Puraskaram, the highest literary award of the Government of Kerala. He declined some of the earlier awards he was selected for which include Kerala Sahitya Akademi Award (1973), Odakkuzhal Award (1995) and Sahitya Akademi Award (1996). Mahatma Gandhi University conferred on him the honoris causa degree of the Doctor of Letters in 2018.

V. M. Girija is an Indian poet and essayist, writing in Malayalam language. She has published a number of books, which include Prem - Ek Album, the Hindi translation of her poetry anthology in Malayalam, Pranayam Oralbum. Kerala Sahithya Akademi awarded her their 2018 annual award for poetry and she is a recipient of Changmpuzha Award for literature. 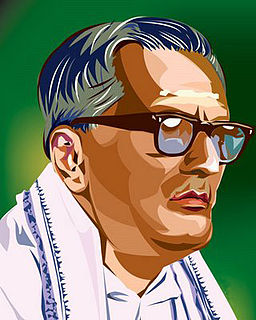 Panayanthitta Kunhiraman Nair, also known as Mahakavi P, was an Indian writer of Malayalam literature. He was known for his romantic poems which detailed the natural beauty of his home state of Kerala in southern India as well as the realities of his life and times. He received the inaugural Kerala Sahitya Akademi Award for Poetry in 1959. He was also a recipient of the Sahitya Akademi Award.

P. Kunjanandan Nair, better known by his pseudonym, Thikkodiyan, was an Indian playwright, novelist, lyricist and screenwriter of Malayalam. He was known for his contributions to the genre of radio plays and his autobiography, Arangu Kaanatha Nadan, which detailed the socio-cultural development of Malabar in the post-independent period, fetched him a number of awards including the Kendra Sahithya Academy Award, Kerala Sahitya Akademi Award for Biography and Autobiography, Vayalar Award and the Odakkuzhal Award.

Pala Narayanan Nair was an Indian poet and lyricist, best known for his work, Keralam Valarunnu, written in 1953, comprising eight volumes, which earned him the title of Mahakavi. He wrote more than 5,000 poems, which have been compiled in about 43 anthologies. Nair, who also wrote the lyrics for the 1956 Malayalam movie, Avar Unarunnu, was a recipient of the Ezhuthachan Puraskaram, the highest literary honour of the Government of Kerala as well as Vallathol Award and Kerala Sahitya Akademi Award for Poetry, besides other honours.

Olappamanna Mana Subramanian Namboothirippad (1923-2000), better identified by his family name, Olappamanna , was an Indian poet of Malayalam literature. A former chairman of Kerala Kalamandalam and an author of 20 books of poetry, his poems were noted for their explicit social expressions. He received two awards from Kerala Sahitya Akademi and another from Kendra Sahitya Akademi, besides honours such as Government of Madras Poetry Prize, Odakkuzhal Award, N. V. Puraskaram, Asan Smaraka Kavitha Puraskaram and Ulloor Award.

Nalapat Balamani Amma was an Indian poet who wrote in Malayalam. She was a prolific writer and was known as the "poetess of motherhood". Amma (Mother), Muthassi (Grandmother), and Mazhuvinte Katha were some of her well-known works. She was a recipient of many awards and honours, including the Padma Bhushan, Saraswati Samman, Sahitya Akademi Award, and Ezhuthachan Award. She was the mother of the renowned writer Kamala Surayya.

Narayanan Nambuthiri Kakkad, commonly known as N. N. Kakkad, was an Indian poet of the Malayalam language. Known for works such as Saphalmee Yathra, Pathalathinde Muzhakkam and Changatham, he was a Sanskrit scholar and was known to have been proficient in painting and music. He was a recipient of several awards including Odakkuzhal Award, Asan Smaraka Kavitha Puraskaram, Kerala Sahitya Akademi Award for Poetry and Vayalar Award.

Ashitha was an Indian writer of Malayalam literature, best known for her short stories, poems and translations. She contributed in popularising haiku poems in Malayalam through her translations and her stories were known for the sensitive portrayal of life. She was a recipient of the Kerala Sahitya Akademi Award for Story as well as other honours including Padmarajan Award, Lalithambika Anterjanam Smaraka Sahitya Award and Edasseri Award.

Vasupurath Unnikrishnan Nair was an Indian writer of Malayalam literature, best known as a contemporary and associate of Vallathol Narayana Menon. He was the author of a number of books which include Tagorinte Nadakangal, the translation of three plays written by Rabindranath Tagore into Malayalam. Nair honoured by the Kerala Sahitya Akademi with the distinguished fellowship in 1981.