Akyaka station (Turkish : Akyaka garı) is a station in the town of Akyaka, Kars in northeastern Turkey. TCDD Taşımacılık operates a twice-daily regional train from Kars.

Akyaka is a district of Kars Province in eastern Turkey, and the name of the small town that is the district's administrative capital. It is located on Turkey's border with Armenia. The settlement was called Şuregel (Shuregel) until 1922 and Kızılçakçak (Kyzylchakchak) between 1922-1961. It was also a district between 1922-1926, and a township in Arpaçay district between 1926-1988. Akyaka municipality was established in 1972. The population was 2,273 in 2010. 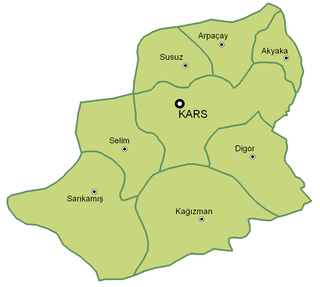 Kars Province is a province of Turkey, located in the northeastern part of the country. It shares part of its closed border with the Republic of Armenia. The provincial capital is the city of Kars. The provinces of Ardahan and Iğdır were until the 1990s part of Kars Province.

The station was originally opened in 1899 by the Transcaucasus Railway as Shuregel station (Turkish : Şöregel, Russian : Шурегель), when Akyaka was a part of the Russian Empire. In 1922, the station was renamed Kızılçakçak station to reflect the name change of the settlement. The railway, and the station, was taken over by the Turkish government-owned Eastern Railway in 1925, which became the Turkish State Railways in 1929. In 1962, TCDD converted the broad gauge railway to standard gauge and rebuilt the station, which was renamed to its current name in 1966. [2] Due to the border closure between Turkey and Armenia, train service east of Kars was suspended in 1993 until February 2011, when TCDD returned train service to Akyaka. 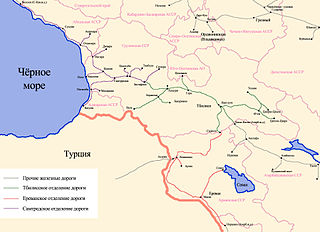 Akyaka station is located in the town center in the vicinity of the town post office and police station. 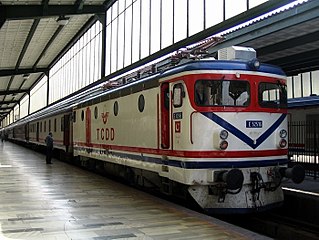 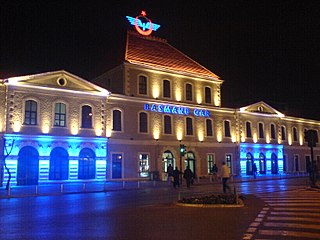 Basmane railway station is an intercity and regional railway terminal and rapid transit station in İzmir, Turkey. Along with Alsancak station, Basmane is one of two railway terminals in the city. All TCDD Taşımacılık trains terminate at this station, with intercity service to Ankara, Bandırma and Konya as well as regional service to Denizli, Söke, Tire and Ödemiş. The name originated from the Turkish phrase Basma hane. 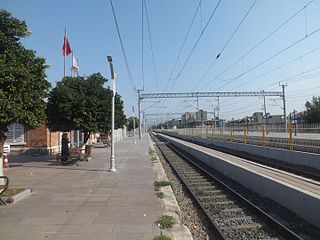 Torbalı railway station is the larger and busier of the two railway stations in the town of Torbalı, Turkey. The station is located 49.7 km (30.9 mi) south of Alsancak Terminal in Izmir and is the southernmost station to service all regional trains south of Izmir.

Edirne railway station is the main railway station in Edirne, Turkey. Located in the southeastern part of the city, TCDD Taşımacılık operates two international intercity trains, both from Istanbul, to Sofia, Bulgaria and Bucharest, Romania which stop at the station. Along with these two trains, TCDD Taşımacılık also operates a daily regional train from Kapıkule to Istanbul. 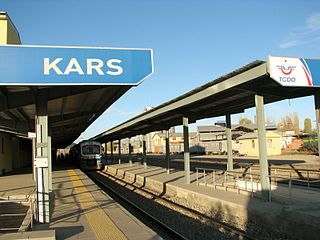 Sarıkamış station is a railway station in the town of Sarıkamış, Turkey. The station is serviced by the Eastern Express, operated by the Turkish State Railways, running between Istanbul and Kars. The station was built in 1913 with broad gauge tracks by the Russian Empire. The tracks were converted into standard gauge in 1962. 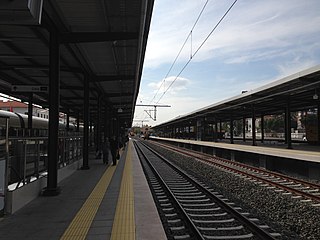 Pendik station is the main railway station in Pendik, Istanbul. Located between Hatboyu and Abdülhalik Renda Avenues in southeastern Pendik, it is the temporary western terminus of the Istanbul-Ankara railway and the Istanbul-Ankara high-speed railway. TCDD Taşımacılık operates YHT trains to Ankara and Konya, via Eskişehir, along with four daily regional trains to Adapazarı. The station is 24.05 km (14.94 mi) away from Haydarpaşa station in central Istanbul.

Pozantı railway station is a railway station in the town of Pozantı, Turkey. Situated in the Taurus Mountains, Pozantı is the northernmost station in the Adana Province. Due to its geographical location near the Cilician Gates, the station was historically a resting stop for trains crossing the mountain range. The station was originally opened on 21 December 1912 by the Baghdad Railway.

Sivas railway station is the main railway station in Sivas, Turkey. Located just southwest of the city center, the station is serviced by three inter-city trains from Ankara, which continue east to Kars, Tatvan and Kurtalan respectively. Due to the rehabilitation of the Kalın-Samsun railway, only one regional train to Divriği services Sivas.

Divriği station is a railway station in Divriği, Turkey. Located in the eastern Sivas Province, and in the northeast of the town, TCDD Taşımacılık operates a daily intercity train, the Eastern Express, from Ankara to Kars, a daily regional train to Erzincan and a thrice daily regional train to Sivas. Divriği station was opened on 11 December 1938 by the Turkish State Railways.

Çerkezköy railway station is a railway station in Çerkezköy, Turkey. TCDD Taşımacılık operates three daily trains, from Istanbul, that stop at the station. Two of these trains are international trains to Sofia, Bulgaria and Bucharest, Romania, the latter being seasonal. The other two trains are regional services to Kapıkule and Istanbul.

Lüleburgaz railway station is a station in the village Durak, Turkey. Despite carrying the town's name, the station is located about 5.9 km (3.7 mi) south of Lüleburgaz. Ever since the station was opened, a settlement began around its vicinity, which later became the village of Durak. TCDD Taşımacılık operates a daily regional train from Istanbul to Kapıkule, which stops at Lüleburgaz station.

Havadurağı railway station is a railway station in Ankara, Turkey, currently being rebuilt. The station was a stop on the Ankara suburban from the 1930s to 2016 when it was closed and demolished shortly after, in order to rebuild and expand the railway. Construction of the new station began in 2017 and is expected to open on 12 April 2018.

Behiçbey railway station is a railway station in Ankara, Turkey, currently being rebuilt. The station was a stop on the Ankara suburban from the 1930s to 2016 when it was closed and demolished shortly after, in order to rebuild and expand the railway. COnstruction of the new station began in 2017 and is expected to open on 12 April 2018.

Kartal railway station is a railway station in Kartal, Istanbul. The station was a stop on the Haydarpaşa suburban between 1951 and 2013, when the railway between Haydarpaşa and Pendik was closed. Starting in late-2018, the station will re-open to Marmaray commuter rail service. Prior to 2012, Kartal station was also a stop on the popular Adapazarı Express regional rail service to Adapazarı.