Sūrah al-Muṭaffifīn (Arabic : سورة المطففين‎, “The Defrauders”) is the eighty-third surah of the Qur'an with 36 ayat.

Name of the surah

Jalaluddin Al-Suyuti co-author of the classical Sunni tafsīr known as Tafsir al-Jalalayn suggests that some of the sūrahs have been named using incipits (i.e. the first few words of the surah). Hamiduddin Farahi a celebrated Islamic scholar of Indian subcontinent is known for his groundbreaking work on the concept of Nazm, or Coherence, in the Quran. He writes that Some sūrahs have been given names after some conspicuous words used in them. [1] The Surah takes its name from its second word al-Mutaffifin -Abul A'la Maududi. [2]

Placement & Coherence with other surahs

The idea of textual relation between the verses of a chapter has been discussed under various titles such as nazm and munasabah in non-English literature and coherence, text relations, intertextuality, and unity in English literature. Hamiduddin Farahi, an Islamic scholar of the Indian subcontinent, is known for his work on the concept of nazm, or coherence, in the Quran. Fakhruddin al-Razi (died 1209 CE), Zarkashi (died 1392) and several other classical as well as contemporary Quranic scholars have contributed to the studies. [3]

This surah belongs to the last(7th) group of surahs which starts from Surah Al-Mulk (67) and runs till the end of the Quran. This surah forms a pair with the next one (Al-Inshiqaq) about their subject-matter. [4]

Tadabbur-i-Quran is a tafsir (exegeses) of the Qur'an by Amin Ahsan Islahi based on the concept of thematic and structural coherence, which was originally inspired by Allama Hamiduddin Farahi. The tafsir is extended over nine volumes of six thousand pages. It describes Al-Mutaffifin as a supplement to the previous surah al-Infitar concerning the central theme and that this surah elaborates the division righteous and the deviants mentioned in last passage of the previous surah. [5] This surah further continues and elaborates the concept of Islamic eschatology alluded towards the end of previous surah. [6]

Connection with next surah

According to Javed Ahmad Ghamidi a Pakistani Muslim theologian, Quran scholar, Islamic modernist, exegete and educationist; the central theme of both surahs is to warn the Quraysh of any misconception they may have about the Day of Judgement. Most surely, they are going to be raised on that day to appear before their Lord and shall definitely meet different fates according to their deeds. [7] [8]

The primary theme of this surah is Hereafter and the rhetoric addresses the following subjects is the discourse. The surah opens with a declaration of war and denunciation of those who use false weights and measures; in 1st 6 ayaat. [9] The surah warns the audience that the acts of the wicked are recorded in the book Sajjín in 7th to 9th ayaat. The surah makes explicit the relation between morality and the doctrine of the Hereafter effectively and impressively with woes to those who reject Muhammad and deny the judgment-day in ayaat up to 17th. Further up to 21st ayat, the surah describes that the acts of the righteous are registered in Illiyún. The rewards of the righteous in Paradise are explained in ayaat 22nd up to 28th. In conclusion, from 29th to 36th ayat, the believers have been consoled, and the disbelievers warned as if to say: Unbelievers mock at Muslims now but shall be laughed at in turn on the Resurrection Day. [2]

The Quran consists of 114 chapters of varying lengths, each known as a sūrah. Many of the surahs contain overlapping subjects yet many of them hold special traits. In this surah for example; the word al-Mutaffifin is unique in its frequency of occurrence as it is mentioned only once in the whole of the Quran. [10] Al-Mutaffifin means the stinters who use unfair means & measures to take more than they should and give less than they should. [2] As the principal subject of the discourse is the stinters/al-Mutaffifin, the surah further elaborates the actions of either; using malpractice or carefully being honest; are recorded in Sajjín and Illiyún respectively. Both of these words Sajjín and Illiyún also occur only in this surah and nowhere else in the whole Quran just like their trigger word Al-Mutaffifin. [11] [12]

The first and foremost exegesis/tafsir of the Qur'an is found in hadith of Muhammad. [13] Although scholars including ibn Taymiyyah claim that Muhammad has commented on the whole of the Qur'an, others including Ghazali cite the limited amount of narratives, thus indicating that he has commented only on a portion of the Qur'an. [14] Ḥadīth (حديث) is literally "speech" or "report", that is a recorded saying or tradition of Muhammad validated by isnad; with Sirah Rasul Allah these comprise the sunnah and reveal shariah. According to Aishah, [15] [16] the life of Prophet Muhammad was practical implementation of Qur'an. [17] [18] [19] Therefore, mention in hadith elevates the importance of the pertinent surah from a certain perspective. Ibn Abbas is known for his knowledge of traditions as well as his critical interpretation of the Qur'an. From early on, he gathered information from other companions of Muhammad and gave classes and wrote commentaries. [20] According to him

Al-ʿĀdiyāt is the 100th chapter (sūrah) of the Qur'an with 11 verses (āyāt). Regarding the timing and contextual background of the supposed revelation, it is an earlier "Meccan surah", which means it is believed to have been revealed in Mecca, instead of later in Medina. According to hadith this surah is recommended in Maghrib prayer.

Al-Qāriʻah is the 101st chapter (sūrah) of the Quran with 11 verses (āyāt). This chapter takes its name from its first word "qariah", referring to the Quranic view of the end time and eschatology. "Qariah" has been translated to calamity, striking, catastrophe, clatterer, etc. According to Ibn Kathir, a traditionalistic exegete, Al-Qariah is one of the names of the Day of Judgement, like Al-Haaqqa, At-Tammah, As-Sakhkhah and others. After a picturesque depiction of judgement day in first 5 ayaat, next 4 ayat describe that God's Court will be established and the people will be called upon to account for their deeds. The people whose good deeds will be heavier, will be blessed with bliss and happiness, and the people whose good deeds will be lighter, will be cast into the burning fire of hell. The last 2 ayaat describe Háwíyah in similar emphatic way as Al-Qariah was emphasized in the beginning.

Aṣ-Ṣaff is the 61st chapter (sūrah) of the Quran with 14 verses (āyāt). This sura is an Al-Musabbihat sura because it begins with the glorification of Allah.

Al-Jumu`ah is the 62nd chapter (sūrah) of the Quran with 11 verses (āyāt). The chapter is named al-jumu`ah ("Friday") because it is the day of assembly, when the community abandons trade, transactions and other diversions in favor of assembling to seek the all-encompassing truth and most beneficent and seek the "bounty of God" exclusively. This surah is an Al-Musabbihat surah because it begins with the glorification of God.

Sūrat al-Munāfiqūn is the 63rd chapter (surah) of the Qur'an with 11 verses. Almost all of the chapter is preserved in the Ṣan‘ā’1 lower text.

At-Taḥrīm is the 66th chapter (sura) of the Quran and contains 12 verses (ayah). This is a Surah which deals with questions regarding Muhammad's wives.

al-Ḥāqqah is the 69th chapter (sūrah) of the Qur'an with 52 verses (āyāt). There are several English names under which the surah is known. These include “The Inevitable Hour”, “The Indubitable”, “The Inevitable Truth”, and “The Reality”. These titles are derived from alternate translations of al-Ḥāqqa, the word that appears in the first three ayat of the sura. Though each of these titles may sound very different, each one alludes to the main theme of the sura – the Day of Judgment.

Sūrat at-Tīn is the ninety-fifth sura of the Qur'an with 8 ayat. 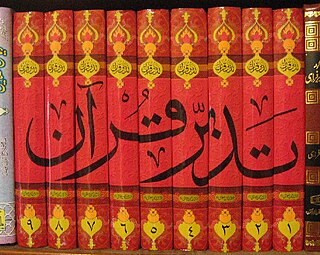 Tadabbur-i-Qur'an is a tafsir (exegeses) of the Qur'an by Amin Ahsan Islahi based on the concept of thematic and structural coherence, which was originally inspired by Allama Hamiduddin Farahi. The tafsir is extended over nine volumes of six thousand pages. It was originally written in Urdu, but now it is being translated in English.

Sūrat al-Māʻūn is the 107th sura of the Qur'an with 7 ayat. Regarding the timing and contextual background of the supposed revelation, it is an earlier "Meccan surah", which means it is believed to have been revealed in Mecca, instead of later in Medina.