Al-Qadisiyah Governorate (Arabic : القادسية‎, romanized: Al Qādisiyah) is one of the governorates of Iraq. It is in the center-south of the country. The estimated population of the province is about a million and a half million people, according to the census of 2014. Its capital is Al Diwaniyah. Before 1976, it was part of the ad-Diwāniyah Governorate, along with al-Muthannā and Najaf. The province is named after the historical city of Al-Qādisiyah, the site of the Battle of al-Qādisiyah, where in 636 CE the Islamic Rashidun forces defeated the forces of the Sassanid Empire. The governorate is predominantly Shia Arab. It includes the Mesopotamian marsh of Hor Aldelmj.

The romanization of Arabic writes written and spoken Arabic in the Latin script in one of various systematic ways. Romanized Arabic is used for a number of different purposes, among them transcription of names and titles, cataloging Arabic language works, language education when used in lieu of or alongside the Arabic script, and representation of the language in scientific publications by linguists. These formal systems, which often make use of diacritics and non-standard Latin characters and are used in academic settings or for the benefit of non-speakers, contrast with informal means of written communication used by speakers such as the Latin-based Arabic chat alphabet. 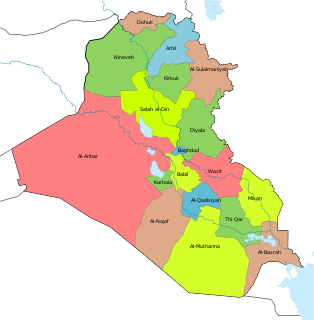 Iraq, officially the Republic of Iraq, is a country in Western Asia, bordered by Turkey to the north, Iran to the east, Kuwait to the southeast, Saudi Arabia to the south, Jordan to the southwest and Syria to the west. The capital, and largest city, is Baghdad. Iraq is home to diverse ethnic groups including Arabs, Kurds, Assyrians, Turkmen, Shabakis, Yazidis, Armenians, Mandeans, Circassians and Kawliya. Around 95% of the country's 37 million citizens are Muslims, with Christianity, Yarsan, Yezidism and Mandeanism also present. The official languages of Iraq are Arabic and Kurdish.

There is one public university known as the University of Qadisiyah, which was founded in the late eighties of the last century and includes colleges such as nursing, pharmacy, law, literature, education, agriculture, medicine and others. The students coming from neighboring provinces and districts and areas of the province. The university located on the old road leading to the city of Hilla. There also are in the province away from the city center is about 6 km technical institute of Al-Qadisiyah. 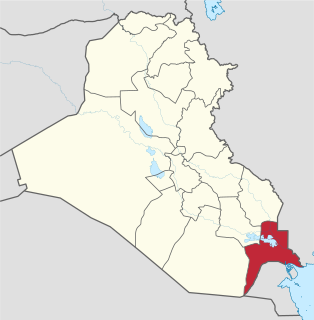 Basra Governorate is a governorate in southern Iraq, bordering Kuwait to the south and Iran to the east. The capital is the city of Basra. Other districts of Basra include Al-Qurnah, Az Zubayr, Al Midaina, Shatt Al Arab, Abu Al Khaseeb and Al Faw located on the Persian Gulf. 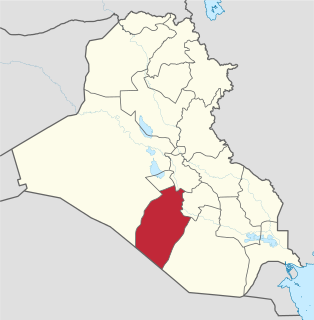 Najaf Governorate or Najaf Province is a governorate in central and southern Iraq. The capital is the city of Najaf. The other major city is Al Kufah. Both cities are holy to Shia Muslims, who form the majority of the population. Prior to 1976 it was part of the Karbala Governorate.

Baghdad Governorate, also known as the Baghdad Province, is the capital governorate of Iraq. It includes the capital Baghdad as well as the surrounding metropolitan area. The governorate is the smallest of the 18 provinces of Iraq but the most populous.

Babil Governorate or Babylon Province is a governorate in central Iraq. It has an area of 5,119 square kilometres (1,976 sq mi), with an estimated population of 1,651,565 people in 2002. The provincial capital is the city of Hillah, which lies opposite the ancient city of Babylon (بابل), on the Euphrates river.

Dhi Qar Governorate is a governorate in southern Iraq. The provincial capital is Nasiriyah. Prior to 1976 the governorate was known as Muntafiq Governorate. Dhi Qar was the heartland of the ancient Iraqi civilization of Sumer, and includes the ruins of Ur, Eridu, Lagash, Larsa, Girsu, Umma, and Bad-tibira. The southern area of the governorate is covered by Mesopotamian Marshes.

Kirkuk Governorate or Kirkuk Province is a governorate in northern Iraq. The governorate has an area of 9,679 square kilometres (3,737 sq mi). In 2017 the estimated population was 1,259,561 people. The provincial capital is the city of Kirkuk. It is divided into four districts. 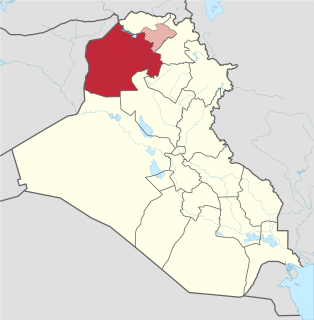 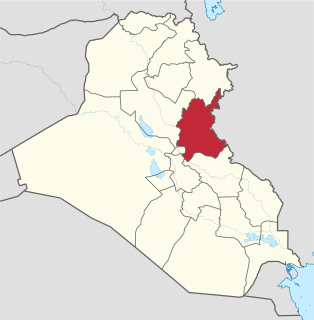 Diyala Governorate or Diyala Province is a governorate in eastern Iraq.

Wasit Governorate is a governorate in eastern Iraq, south-east of Baghdad and bordering Iran. Prior to 1976 it was known as Kut Province. Major cities include the capital Al Kut, Al-Hai and Al-Suwaira. The governorate contains the Mesopotamian Marshes of Shuwayja, Al-Attariyah, and Hor Aldelmj. Its name comes from the Arabic word meaning "middle," as the former city of Wasit lay along the Tigris about midway between Baghdad and Basra. Wasit city was abandoned after the Tigris shifted course.

Maysan Governorate is a governorate in southeastern Iraq, bordering Iran. Its administrative centre is the city of Amarah. Prior to 1976 it was known as Amara Province.

Karbala Governorate is a governorate in central Iraq. Its administrative center is the city of Karbala, a holy city for Shia Muslims for housing the shrine of the revered Imam Hussein. The population is 100% Shia. The governorate includes part of the artificial Lake Milh. 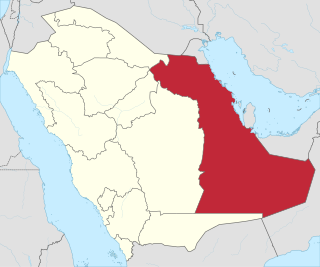 Al Diwaniyah, also spelt Diwaniya, is the capital city of Iraq's Al-Qādisiyyah Governorate. In 2002 the population was estimated at 440,927.

Operation Black Eagle is an operation that took place during Operation Iraqi Freedom from 2003 to 2010. It was the 381st listed operation during the Iraq war in 2003 Black Eagle was an operation in which U.S. Polish, and Iraqi troops battled gunmen loyal to anti-American cleric Muqtada al-Sadr in the town of Al Diwaniyah, which is the capital of Iraq's Al-Qādisiyyah Governorate, for control of the city. U.S. warplanes targeted insurgent positions with Hellfire missiles in and near the city. As of 7 April 2007, Iraqi officials have verified six insurgents killed and 39 captured. On 10 April 2007, combat operations had been declared to have ended and the operation continued into the reconstruction phase. There is no relation to Operation Black Eagle II that took place in January 2007.

The Polish zone in Iraq or the South Central / South Center / Central South / Center South zone / sector was created in 2003 when Iraq was divided into four zones. The South Central zone covers the Al-Qādisiyyah Governorate, Karbala Governorate, Babil Governorate and the Wasit Governorate. The region had a population of about 5 million spread over 65,632 km². It was the area of responsibility for Multinational Division Central-South under Polish command.

Multinational Division Central-South (MND-CS), created in September 2003, and supported by NATO, was a part of the Multinational Force Iraq. Headquartered in Camp Echo, it was under Polish command until October 2008, when the last of Poland's troops were withdrawn. Polish contingent was its largest. Other participants included Armenia, Bosnia and Herzegovina, Bulgaria, Denmark, Kazakhstan, Latvia, Lithuania, Mongolia, Norway, Romania, El Salvador, Slovakia, Spain, Ukraine and the United States of America. As of December 2008, Armenian, Bosnian, Danish, Latvian, Kazakh, Lithuanian, Mongolian, Spanish and Slovakian forces have been fully withdrawn.

The University of Al-Qadisiyah is an Iraqi university established in 1987 in Al Diwaniyah, Qadisiyyah Province, Iraq.