As al-Walid grew older, Hisham became increasingly displeased with his nephew's behaviour (including an excessive love for poetry and sex) and considered passing the succession to Hisham's son instead. He spoke to al-Walid about his drinking of alcohol and commanded al-Walid to send away his best drinking companion. He also cut off funds to his heir and strongly encouraged him to be more respectful in religious matters.

Al-Walid succeeded to the throne on the death of Hisham on 6 February 743. As heir, al-Walid was known for his open-handedness. As caliph, he took special care of the crippled and blind, increasing their stipend. He named his two sons, al-Hakam and Uthman, to succeed him in that order as documented by a letter dated 21 May 743 in al-Tabari. [1] Tabari also quotes a number of al-Walid's poems.

Al-Walid at first confirmed Nasr ibn Sayyar as governor of Khurasan. However, bribed by Yusuf ibn Umar, the caliph dismissed him. Al-Walid appointed his uncle Yusuf ibn Muhammad governor of Medina. At the same time, Yahya ibn Zayd, the son of Zayd ibn Ali, was found in Khurasan. Nasr urged him to present himself to the caliph, to maintain Islamic unity. However, Yahya chose another path and after initial victory was slain.

Al-Walid put Sulayman ibn Hisham in prison. Such a deed, as well as his reputed drinking, singing and immorality aroused opposition. Al-Walid was fond of versifying and he arranged horse races. The upright Yazid ibn al-Walid spoke against the new ruler's moral laxity. A group began plotting his assassination. When approached, Khalid ibn Abdallah al-Qasri declined to join in and even cautioned al-Walid. However, his vague warning aroused al-Walid's ire. He imprisoned Khalid and then gave him to Yusuf ibn Umar for fifty million dirhams. Yusuf tortured and killed Khalid. This intensely angered many of al-Walid's own relatives.

Hearing of the plot, Marwan ibn Muhammad wrote from Armenia urging a more prudent course of action, one more promising for the stability of the state and the preservation of the Umayyad house. This was disregarded and many armed men moved into Damascus. The caliph was besieged in a castle outside the city. He fought well, but on April 16, 744, at Al-Aghdaf, in modern Jordan, he was defeated and killed by the forces of Sulayman ibn Hisham. He was succeeded by his cousin Yazid III.

Sulayman ibn Abd al-Malik was the seventh Umayyad caliph, ruling from 23 February 715 until his death. He began his career as governor of Palestine, while his father Abd al-Malik and brother al-Walid I reigned as caliphs. There, the theologian Raja ibn Haywa al-Kindi mentored him, and he forged close ties with Yazid ibn al-Muhallab, a major opponent of al-Hajjaj ibn Yusuf, al-Walid's powerful viceroy of Iraq and the eastern Caliphate. Sulayman resented al-Hajjaj's influence over his brother. As governor, he founded the city of Ramla and built the White Mosque in it. The new city superseded Lydda as the administrative capital of Palestine, which was at least partly destroyed and whose inhabitants may have been forcibly relocated to Ramla. Ramla developed into an economic hub, became home to numerous Muslim scholars, and remained the administrative capital of Palestine until the 11th century.

Umar ibn Abd al-Aziz, commonly known as Umar II, was the eighth Umayyad caliph. He made various significant contributions and reforms to the society, and he has been described as "the most pious and devout" of the Umayyad rulers and was often called the first Mujaddid and fifth righteous caliph of Islam.

Yazid bin Abd al-Malik, also referred to as Yazid II, was the ninth Umayyad caliph, ruling from 9 February 720 until his death in 724.

Hisham ibn Abd al-Malik was the tenth Umayyad caliph who ruled from 724 until his death in 743. When he was born in 691 his father named him after his mother.

Yazid ibn al-Walid ibn 'Abd al-Malik or Yazid III was the twelfth Umayyad caliph. He reigned for six months, from April 15 to October 3 or 4, 744, and died in that office.

Ibrahim ibn al-Walid was an Umayyad caliph, and a son of Caliph al-Walid I. He ruled from 4 October 744 to 4 December 744.

Marwan ibn Muhammad ibn Marwan ibn al-Hakam, also called Marwan II, was the fourteenth and last caliph of the Umayyad Caliphate, ruling from 744 until he was killed in 750. Much of his reign was dominated by a civil war, and he was the last Umayyad ruler to rule the united Caliphate before the Abbasid Revolution toppled the Umayyad dynasty.

This is a timeline of major events in the Muslim world from 701 AD to 800 AD.

Yazid ibn al-Muhallab (672–720) was a provincial governor in the time of the Umayyad dynasty and an early member of the Muhallabid family that became important in early Abbasid times. 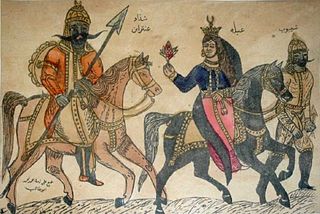 The Banu Abs are an ancient Bedouin tribe that originated in central Arabia. They form a branch of the powerful and numerous Ghatafan tribes. They still inhabit the Arabian Peninsula and North Africa but have spread to many other regions of the world, as well. Their descendants today include the large Bani Rasheed tribe located in Saudi Arabia, Sudan, Yemen, Kuwait, United Arab Emirates, Oman, Eritrea, and Jordan, and the Banu Rawaha located mostly in Oman and the UAE. Parts of the Mahas tribe of the Butana region in Sudan are also linked by blood to the Banu Abs due to intermarriage between the Sudanese Rashaida tribe and the Mahas peoples. One of the earliest stories concerning this tribe was the famous classical love and war story of Antar and Abla. 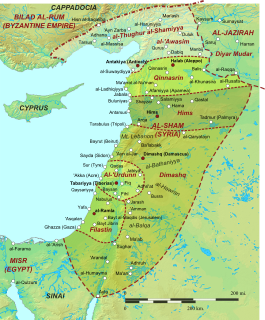 Jund Ḥimṣ was one of the military districts of the caliphal province of Syria. 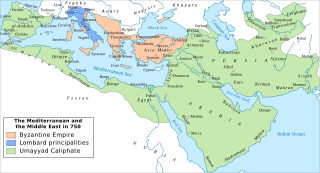 The Third Fitna, was a series of civil wars and uprisings against the Umayyad Caliphate beginning with the overthrow of Caliph al-Walid II in 744 and ending with the victory of Marwan II over the various rebels and rivals for the caliphate in 747. However, Umayyad authority under Marwan II was never fully restored, and the civil war flowed into the Abbasid Revolution (746–750) which culminated in the overthrow of the Umayyads and the establishment of the Abbasid Caliphate in 749/50. Thus a clear chronological delimitation of this conflict is not possible.

Khālid ibn ʿAbdallāh al-Qasrī was an Arab who served the Umayyad Caliphate as governor of Mecca in the 8th century and of Iraq from 724 until 738. The latter post, entailing as it did control over the entire eastern Caliphate, made him one of the most important officials during the crucial reign of Caliph Hisham ibn Abd al-Malik. He is most notable for his support of the Yaman tribes in the conflict with the Qays who dominated the administration of Iraq and the East under his predecessor and successor. Following his dismissal, he was twice imprisoned and in 734 tortured to death by his successor.Yusuf ibn Umar al-Thaqafi.

Yusuf ibn Umar al-Thaqafi was a senior provincial governor for the Umayyad Caliphate. His policies during his tenure as governor of Iraq in 738–744 deepened the Qays–Yaman rivalry and were one of the main factors in the outbreak of the civil war of the Third Fitna, during which he was executed.

Hisham ibn Isma'il al-Makhzumi was an eighth century official for the Umayyad Caliphate, and the maternal grandfather of the caliph Hisham ibn 'Abd al-Malik. He served as the governor of Medina from 701 to 706.

Sa'id ibn Abd al-Malik ibn Marwan, also known as Saʿīd al-Khayr, was an Umayyad prince and governor. He served as governor of Mosul for an undetermined period under his father Caliph Abd al-Malik and was responsible for several building and infrastructural works. He also played a role in the construction of the Dome of the Rock in Jerusalem. He was later granted property in Mosul's vicinity by Caliph al-Walid I or Caliph Umar ibn Abd al-Aziz, which he developed into an agricultural tract with a canal. In 724 and 725, he led summer campaigns against the Byzantines in Anatolia. During the brief rule of Caliph al-Walid II, between February 743 to April 744, Sa'id served as governor of Palestine, but was expelled by rebels in the district after al-Walid's death. Sa'id was ultimately killed during the massacre of the Umayyad family near Ramla after the Abbasid victory over the dynasty in 750.

Muslim ibn Sa'id ibn Aslam ibn Zur'ah ibn Amr ibn Khuwaylid al-Sa'iq al-Kilabi was governor of Khurasan for the Umayyad Caliphate in 723–724. He is best known for his efforts to conciliate the native population of Transoxiana and for the major military defeat at the "Day of Thirst" against the Türgesh.

Muhammad ibn Abd al-Malik ibn Marwan was an Umayyad prince, the son of Caliph Abd al-Malik, who played a role in the intra-dynastic politics of the Umayyad Caliphate, including the Third Muslim Civil War and the succession of Caliph Marwan II. He served as Marwan II's governor of Mecca, Medina and Ta'if in 747/48 and was executed by the Abbasids in the massacre of the Umayyads at Nahr Abi Futrus in Palestine in 750.

Abu Abdallah Salm ibn Qutayba ibn Muslim al-Bahili was an 8th-century Arab who served as governor and military commander for both the Umayyad and Abbasid caliphates.