Al-Zubair District is a district in Basra Governorate, Iraq. It seat is the city of Al-Zubair. In the 1880s some Najd tribes immigrated to al-Zubair due to the fact that Najd had nothing to offer, but around 1945s they returned to their home (Saudi Arabia) after it has changed notably. In the early 1990s, Saddam Hussein hoped to make al-Zubair province number 19 and annex it to Kuwait after invading. The failure of the Invasion of Kuwait put rest to this idea. The district is majority Sunni of Maliki .

Kuwait is a country in the Arabian Peninsula, surrounding the Gulf of Kuwait at the head of the Persian Gulf. In the eighteenth and nineteenth centuries, Kuwait was a prosperous trade port.

The history of Saudi Arabia in its current form as a state began with its foundation in 1744, although the human history of the region extends as far as 20,000 years ago. The region has had a global impact twice in world history. In the 7th century it became the cradle of Islam and the capital of the Islamic Rashidun Caliphate. From the mid-20th century the discovery of vast oil deposits propelled it into a key economic and geo-political role. 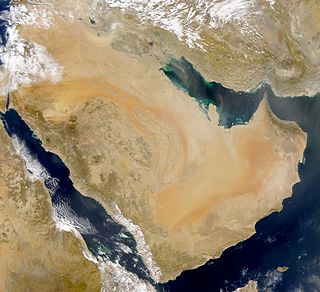 The Kingdom of Saudi Arabia is a country situated in Southwest Asia, the largest country of Arabia, by the Arabian Peninsula, bordering the Persian Gulf and the Red Sea, north of Yemen. Its extensive coastlines on the Persian Gulf and Red Sea provide great leverage on shipping through the Persian Gulf and the Suez Canal. The kingdom occupies 80% of the Arabian Peninsula. Most of the country's boundaries with the United Arab Emirates (UAE), Oman, and the Republic of Yemen are undefined, so the exact size of the country remains unknown. The Saudi government estimate is at 2,217,949 square kilometres, while other reputable estimates vary between 2,149,690 and 2,240,000 sq. kilometres. Less than 1% of the total area is suitable for cultivation, and in the early 1960s, population distribution varied greatly among the towns of the eastern and western coastal areas, the densely populated interior oases, and the vast, almost empty deserts. 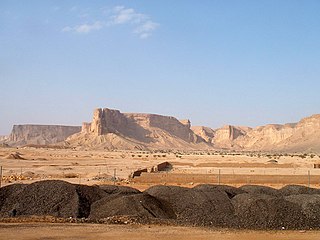 Najd or Nejd is a geographical central region of Saudi Arabia that accounts for about a third of the population of the country. Najd consists of the modern administrative regions of Riyadh, Al-Qassim, and Ha'il.

The Anglo-Ottoman Convention of 1913 was an agreement between the Sublime Porte of the Ottoman Empire and the Government of the United Kingdom of Great Britain and Ireland which defined the limits of Ottoman jurisdiction in the area of the Persian Gulf with respect to Kuwait, Qatar, Bahrain, and the Shatt al-‘Arab. Signed, but never ratified, the long-lasting impact of the agreement was that of the status of Kuwait; the basis for both formal independence and the frontiers of modern Kuwait were established.

Safwan is a town in southeast Iraq on the border with Kuwait. It was the site of an Iraqi Air Force base.

Az Zubayr is a city in and the capital of Al-Zubair District, part of the Basra Governorate of Iraq. The city is just south of Basra. The name can also refer to the old Emirate of Zubair.

Al-Yamamah is an ancient historical region lying to the east of the plateau of Najd in modern-day Saudi Arabia, or sometimes more specifically, the now-extinct ancient village of Jaww Al-Yamamah, near Al-Kharj, after which the rest of the region was named. Only a handful of centralized states ever arose in Yamamah, but it figured prominently in early Islamic history due to it becoming a central theater in the Ridda Wars immediately following Muhammad's death. The region was gradually subsumed in recent centuries under the term "Najd", which encompasses a larger area. However, the term "Al-Yamamah" still lives on as a nostalgic historical term that is invoked to emphasize the region's ties with its ancient past. The current headquarters of the Saudi government in Riyadh, for example, is known as the Palace of Yamamah. 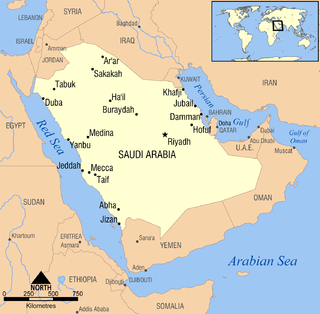 The Unification of the Saudi-ruled Arabia was a military and political campaign in which the various tribes, sheikhdoms, city-states, emirates, and kingdoms of most of the Arabian Peninsula were conquered by the House of Saud, or Al Saud. Unification started in 1902 and continued till 1932, when the modern-day Kingdom of Saudi Arabia was proclaimed under the leadership of Ibn Saud, creating what is sometimes referred to as the Third Saudi State, to differentiate it from the Emirate of Diriyah, the First Saudi State and the Emirate of Nejd, the Second Saudi State, also House of Saud states.

Zakręty is a village in the administrative district of Gmina Stary Dzierzgoń, within Sztum County, Pomeranian Voivodeship, in northern Poland. It lies approximately 3 kilometres (2 mi) north-west of Stary Dzierzgoń, 25 km (16 mi) east of Sztum, and 76 km (47 mi) south-east of the regional capital Gdańsk.

Pastwiska is a settlement in the administrative district of Gmina Barciany, within Kętrzyn County, Warmian-Masurian Voivodeship, in northern Poland, close to the border with the Kaliningrad Oblast of Russia. It lies approximately 3 kilometres (2 mi) east of Barciany, 15 km (9 mi) north of Kętrzyn, and 76 km (47 mi) north-east of the regional capital Olsztyn.

Słowikowo is a settlement in the administrative district of Gmina Resko, within Łobez County, West Pomeranian Voivodeship, in north-western Poland. It lies approximately 1 kilometre (1 mi) west of Resko, 24 km (15 mi) north-west of Łobez, and 69 km (43 mi) north-east of the regional capital Szczecin.

Grochowiska is a village in the administrative district of Gmina Szczecinek, within Szczecinek County, West Pomeranian Voivodeship, in north-western Poland. It lies approximately 7 kilometres (4 mi) east of Szczecinek and 150 km (93 mi) east of the regional capital Szczecin.

Al Farwaniyah is the capital of the Al Farwaniyah Governorate in Kuwait. The Ghazali Expressway passes to the west of the district and the road leading to Kuwait International Airport to the east, both roads in a north-south direction. Farwaniya contains mosques, hospitals, a university, a park and other facilities. It's the most populated city in Kuwait.

The Battle of the Camel, also known as the Battle of Jamel or the Battle of Basra, took place at Basra, Iraq on 7 November 656. The battle was fought between Ali ibn Abi Talib, who was the cousin and son-in-law of the deceased Prophet of Islam, Muhammad, considered the fourth Rashidun Caliph of the Sunnis and the first Imam of the Shias, and A'isha, Talhah and Zubayr who led the war against Ali aiming to avenge the death of the third caliph Uthman who was the son-in-law of Muhammad, who had recently been killed as a result of rebellion by his opponents. Marking the second chapter of the First Fitna, the fateful battle ended with victory for Ali and the defeat of Aisha.

Khor Al Zubair is a city in Basra, in Iraq. As well as the Khor Al Zubair Port, it is also has major industrial areas which are home to laboratories and companies that include petrochemical companies and fertilizer plants. To the south there are iron and steel plants, as well as those producing various liquids and gases.

The Kuwait–Najd War erupted in the aftermath of World War I. The war occurred because Ibn Saud of Najd wanted to annex Kuwait. The sharpened conflict between Kuwait and Najd led to the death of hundreds of Kuwaitis. The war resulted in sporadic border clashes throughout 1919–1920. 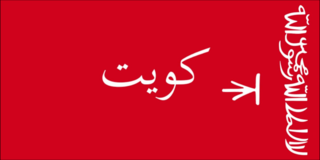 The Sheikhdom of Kuwait was a sheikhdom which gained independence from the Khalidi Emirate of Al Hasa under Sabah I bin Jaber in the year 1752. The Sheikhdom became a British protectorate between 1899 and 1961 after the Anglo-Kuwaiti agreement of 1899 was signed between Sheikh Mubarak Al-Sabah and the British government in India due to severe threats to Kuwait's independence from the Ottoman Empire. 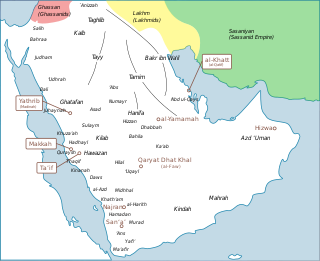 Not to be confused with the Qahtanite peoples

Al Shaheed Park is the largest urban park in Kuwait.