Al Ewing ( /ˈjuːɪŋ/ ) is a British comics writer who has mainly worked in the small press and for 2000 AD and Marvel Comics.

Al Ewing began his career writing stories in the four-page Future Shocks format for 2000 AD and moved on to regular stints on Judge Dredd , [1] for which his story "Doctor What?" marked Brendan McCarthy's return to 2000 AD. They would together on a new series entitled The Zaucer of Zilk. [2] [3] Ewing worked on Damnation Station and Zombo , illustrated by Henry Flint, which was collected in trade paperback in 2010.

Ewing has also contributed to Solar Wind , FutureQuake , and The End Is Nigh . He is responsible for the mobile comic Murderdrome , created with P. J. Holden.

In May 2007, Ewing created the comedy blog "The Diary of Ralph Dibney", writing as the titular DC Comics superhero (also known as Elongated Man), Dibney's therapist, or as the even more obscure DC Hero Richard Dragon, as they react to the events of each week's issue of the comic book 52 . [4]

Breaking into American comic books, Ewing was also picked by Garth Ennis to provide a six-issue arc on Jennifer Blood, published by Dynamite Entertainment, [5] [6] and a spin-off series The Ninjettes. [7]

His debut prose novel Pax Britannia: El Sombra , published by Abaddon Books in 2007. features a mysterious Mexican hero fighting back against the menace of steam-powered Nazis. [8] It is set in the same Steampunk alternate history as the other novels from the Pax Britannia series. Three other novels have been published since, with a fifth on the way.

Ewing wrote Mighty Avengers and Loki: Agent of Asgard for Marvel Comics [9] and co-wrote the first year of the Eleventh Doctor Doctor Who title with Rob Williams for Titan Comics. [10]

Ewing has since written New Avengers , U.S.Avengers , Ultimates , Rocket , Royals , and The Immortal Hulk , all for Marvel. The Immortal Hulk was a nominee for the 2019 Eisner Award in the "Best Continuing Series" category, [11] and had earned publisher Marvel Comics a Diamond Gem Award the previous year as "Best New Comic Book Series." [12] 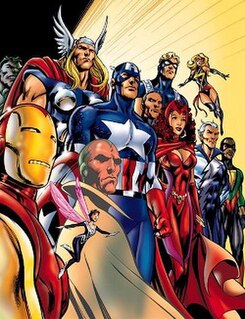 The Avengers are a fictional team of superheroes appearing in American comic books published by Marvel Comics. The team made its debut in The Avengers #1, created by writer-editor Stan Lee and artist/co-plotter Jack Kirby. Labeled "Earth's Mightiest Heroes", the Avengers originally consisted of Iron Man, Ant Man, Hulk, Thor and Wasp. The original Captain America was discovered trapped in ice in issue #4, and joined the group after they revived him.

Dr. Henry "Hank" Pym is a fictional character appearing in American comic books published by Marvel Comics. Created by penciler Jack Kirby, editor-plotter Stan Lee and scripter Larry Lieber, the character first appeared in Tales to Astonish #27. The character, a scientist that debuted in a standalone science-fiction anthology story, returned several issues later as the original iteration of the superhero Ant-Man with the power to shrink to the size of an insect. Alongside his crime-fighting partner-wife Janet van Dyne, he goes on to assume other superhero identities, including the size-changing Giant-Man and Goliath; the insect-themed Yellowjacket; and briefly the Wasp. He is a founding member of the superhero team the Avengers and the creator of the robotic villain Ultron.

What If, sometimes rendered as What If...?, is a comic book anthology series published by Marvel Comics whose stories explore how the Marvel Universe might have unfolded if key moments in its history had not occurred as they did in mainstream continuity. Since What If debuted in 1977, the comics have been published in 13 series as well as occasional stand-alone issues.

The Elders of the Universe are a group of supervillains appearing in American comic books published by Marvel Comics. The Collector was the first Elder to appear, and featured in Avengers #28, but the idea that he was a member of a group known as the Elders was not introduced until Avengers #174.

The Defenders are a set of fictional superhero groups with rotating membership appearing in American comic books published by Marvel Comics. They are usually presented as a "non-team" of individualistic "outsiders" who, in their prior adventures, are known for following their own agendas. The team often battle mystic and supernatural threats.

Ultron is a fictional supervillain appearing in American comic books published by Marvel Comics. He is a self-aware and highly intelligent robot, created by Avengers character Hank Pym, who develops a grudge against Pym and the human race. Ultron's goal to destroy humanity has brought him into repeated conflict with the superhero team the Avengers. Stories often end in Ultron's apparent destruction, only for the character to be resurrected in new forms. For these reasons, Ultron is often regarded as the Avengers' archenemy.

Monica Rambeau is a fictional character and superhero appearing in American comic books published by Marvel Comics. Created by writer Roger Stern and artist John Romita Jr., the character debuted in The Amazing Spider-Man Annual #16. Monica was introduced as the second Captain Marvel and she gained super powers after being bombarded by extradimensional energy, produced by an energy disruptor weapon. The character joined and eventually became leader of the Avengers for a time. She was also a member of Nextwave and the latest Ultimates team. She has also been known as Photon, Pulsar and beginning in 2013, Spectrum.

Emperor Hulkling is a fictional superhero appearing in American comic books published by Marvel Comics. The character has been depicted as a member of the Young Avengers, a team of superheroes in the Marvel Universe. Hulkling's character is patterned on the Hulk, with shapeshifting abilities that go far beyond the ability to mimic the Hulk, and superhuman strength. He is known for his relationship with fellow Young Avenger Wiccan, notable for being one of the highest-profile LGBT relationships in comics.

A Life Model Decoy is a fictional android appearing in American comic books published by Marvel Comics. LMDs duplicate all outward aspects of a real living person, with such authenticity that they can easily impersonate a specific person without casual detection. LMDs first appeared in "The Man For the Job!", a short story by writer Stan Lee and artist Jack Kirby that ran the anthology book Strange Tales #135 in which the spy agency S.H.I.E.L.D. created LMDs of agent Nick Fury to use as decoys for an attack by the terrorist organization Hydra.

Dan Slott is an American comic book writer, known for his work on Marvel Comics books such as The Amazing Spider-Man, as well as She-Hulk, Silver Surfer, The Superior Spider-Man, Tony Stark: Iron Man, The Mighty Avengers, and Fantastic Four. His work for DC Comics includes the books Arkham Asylum: Living Hell and Batman Adventures, and has also done work outside of the Big Two comics publishers, on titles such as Ren & Stimpy.

Brendan McCarthy is a British artist and designer who has worked for comic books, film and television. He co-wrote the film Mad Max: Fury Road. He is the brother of Jim McCarthy.

Sentry is a fictional character/Superhero appearing in American comic books published by Marvel Comics. The character first appears in The Sentry #1, and was created by Paul Jenkins and Jae Lee with uncredited conceptual contributions by Rick Veitch.

The Mighty Avengers is a comic book series that was published by Marvel Comics. Originally written by Brian Michael Bendis, also the writer of New Avengers, the title first featured an officially sanctioned Avengers team of registered superheroes, residing in New York City as part of the Fifty State Initiative, as opposed to the unlicensed team featured in The New Avengers. This first incarnation of the team is led by Iron Man and Ms. Marvel, with the second lineup featuring Hank Pym as the leader, and the third led by Luke Cage and Monica Rambeau. 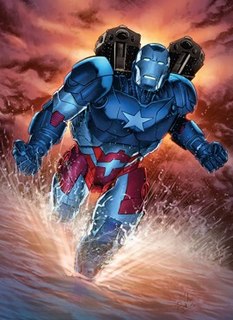 A Fresh Start is a 2018 relaunch of comic book publications by Marvel Comics, following Marvel Legacy.

The GLAAD Media Award for Outstanding Comic Book is an annual award that honors comics writers for excellence in the depiction of LGBT characters and themes. It is one of several categories of the GLAAD Media Awards, which are presented by GLAAD—a U.S. non-governmental media monitoring organization founded in 1985, formerly called the Gay & Lesbian Alliance Against Defamation—at ceremonies in New York, Los Angeles, and San Francisco between March and June.