Last updated July 01, 2021
This article is about the pianist. For the U.S. general & politician, see Alexander Haig.

Haig was born in Newark, New Jersey and raised in nearby Nutley. [2] In 1940, he majored in piano at Oberlin College. [3] He start performing with Dizzy Gillespie and Charlie Parker in 1945, [4] and performed and recorded under Gillespie from 1945 to 1946, as a member of Eddie Davis and His Beboppers in 1946 (also featuring Fats Navarro), and the Eddie Davis Quintet in 1947, under Parker from 1948 to 1950, and under Stan Getz from 1949 to 1951. The Gillespie quintet, which included Haig, recorded four 78 r.p.m. sides for Guild Records in May 1945 which are regarded as the first recordings to demonstrate all elements of the mature bebop style. [4] He was part of the nonet on the first session of Miles Davis' Birth of the Cool .

For much of the 1950s and 1960s, "Haig was all but a forgotten giant", in Brian Case's words; "Jazz pianism, ever more percussive in a crass simplification of [Bud] Powell's methods, had no room for the crystalline touch and swift, logical turnover of ideas. Haig got by with semi-cocktail piano in New York bars." [3] Although Haig is best remembered for playing bebop, he spent much of his career playing in non-jazz contexts. His work was the subject of a revival in the 1970s.

In 1969, Haig was acquitted of a murder charge. He had been accused of strangling his third wife, Bonnie, at their home in Clifton, New Jersey, on October 9, 1968. He had said in evidence that his wife had been drunk, and had died in a fall down a flight of stairs. [5] Grange Rutan, Haig's second wife, challenged Haig's account in her 2007 book, Death of a Bebop Wife. [6] Rutan's book is partly autobiographical, partly based on interviews with friends and family members. She describes Bonnie's story in detail, describing an underside to Haig that included a history of serial domestic abuse. Rutan observed that several family members sounded alarm bells regarding Haig's violent personality that went unheeded. She quotes bassist Hal Gaylor, who was talking with Haig before a performance at the Edison Hotel lounge in the early seventies, when Haig admitted to him he had caused Bonnie's death.

In 1974, Haig was invited to tour Europe by Tony Williams, owner of Spotlite Records in the United Kingdom. At the end of a very successful tour he recorded the Invitation album for Spotlite with Bibi Rovère on bass and Kenny Clarke on drums. This kick-started his re-emergence and, over the next eight years, he built a strong following in Europe and toured several times, recording in the UK and France, and appearing elsewhere. He also recorded for several Japanese labels.

For Musicians Only is a 1958 jazz album by Dizzy Gillespie, Stan Getz and Sonny Stitt incorporating bebop influences.

Stan Levey was an American jazz drummer. He was known for working with Charlie Parker and Dizzy Gillespie in the early development of bebop during the 1940s, and in the next decade had stint with bandleader Stan Kenton. Levey retired from music in the 1970s to work as a photographer. 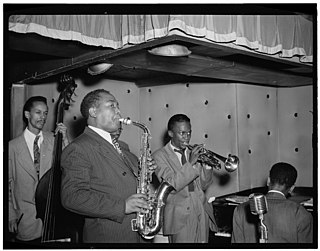 "Confirmation" is a bebop standard composed by saxophonist Charlie Parker in 1945. It is known as a challenging number due to its long, complex head and rapid chord changes, which feature an extended cycle of fifths. The harmonic rhythm of "Confirmation" is noted for its speed and intricacy, typical for the bebop era.

James Elbert Raney was an American jazz guitarist born in Louisville, Kentucky, known for his work from 1951 to 1952 and then from 1953 to 1954 with the Red Norvo trio and, during the same time period, with Stan Getz. In 1954 and 1955, he won the DownBeat Critics' Poll for guitar. Raney worked in a variety of jazz mediums, including cool jazz, bebop, post bop, hard bop, and mainstream jazz.

Prezervation is a compilation album by saxophone player Stan Getz and pianist Al Haig. It was released in January 1968 and includes performances recorded between 1949 and 1950. The album features both instrumental and vocal pieces. Whilst the first eight pieces had been available on LP before, tracks 9-12 were unissued at the time of the album's release and don't feature Getz playing. Prezervation also includes the rarities "Stardust" and "Goodnight My Love", whose masters had been thought lost until being rediscovered by Don Schlitten shortly before the album's release. 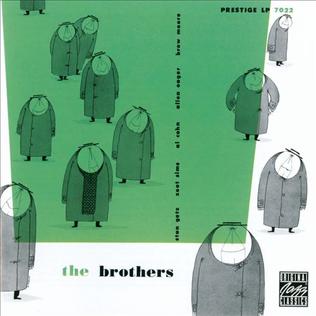 The Brothers is a studio compilation album by American saxophonists Stan Getz and Zoot Sims released in 1956 via Prestige label.

The Complete Roost Recordings is a 1997 compilation 3-CD set of sessions led by saxophonist and bandleader Stan Getz recorded for the Roost Records label between 1950 and 1954. The compilation includes material previously released on Getz's Roost LPs The Sound, The Getz Age, the two volumes of Stan Getz at Storyville and the album with guitarist Johnny Smith - Moonlight in Vermont along with alternate takes and previously unreleased performances.

Stan Getz Quartets is an album by saxophonist Stan Getz recorded at sessions in 1949 and 1950 and first released as an LP on the Prestige label in 1955.

Solo Piano is an album by jazz pianist Tommy Flanagan. It was recorded in 1974 and released in 2005 by Storyville Records.