Alain II Hir, "Alain II the tall", (c. 630 – 690), also known as Alan Hir was a king of Brittany who succeeded his father Iudicael as King of Cornouaille not to be confused with the contemporary Saint Iudicael King of Domnonee who was son of Iudhael King of Domnonee. He was the grandson of Hoel III King of Brittany and descended from Aldroen grandson of Cynan Meiriadog of the Welsh tale Breuddwyd Macsen Wledig via his son Gwereg the historical "Erec" from the Breton Romance Erec et Enid. He was the father of a supposed figure named Ifor who ruled Cornwall after reconquering it from the West Saxons who then left it to his nephew either Idwal Iwrch King of Gwynedd or his son Rhodri Molwynog King of the Britons as versions of the story vary, his daughter who in welsh genealogical manuscripts is either the mother or wife of Idwal Iwrch and possible mother of the aforementioned Rhodri Molwynog. According to Welsh tradition he was a 4th great nephew of Arthur by the marriage of Arthur's sister Elen (sometimes mistaken as her other sisters in later Romance as Anna or Gwyar) to Hoel II of Brittany.

According to Geoffrey of Monmouth, Cadwaladr fled from Britain during a devastating plague. He sought help from Alain to restore the British to power in their homeland, but he then received an angelic visitation which told him that he must renounce his crown and go to Rome as a penitent. If he did so the British people (Welsh and Bretons) would be reunited in the future and the English (Anglo-Saxons) expelled from the land. King Alain then consults books of prophesies written by the Sybils and by Merlin, discovering that "these and other prophecies accorded to the divine answer that Cadwaladr had heard" (in the version reported in The Chronicles of England). Alain assures Cadwaladr that he must do as the heavenly voice commanded. [1] 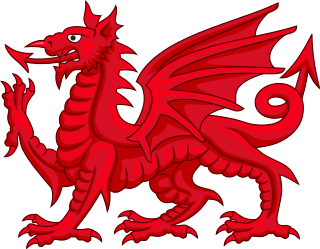 Cadwaladr ap Cadwallon was king of Gwynedd in Wales from around 655 to 682 AD. Two devastating plagues happened during his reign, one in 664 and the other in 682; he himself was a victim of the second. Little else is known of his reign. 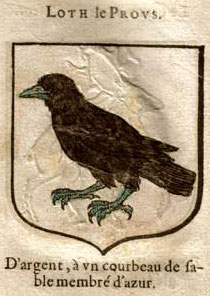 Lot, Loth or Lothus is the king of Lothian, the realm of the Picts in the Arthurian legend. Such a ruler first appeared late in the 1st millennium's hagiographical material concerning Saint Kentigern, which feature a Leudonus, king of Leudonia, a Latin name for Lothian. In the 12th century, Geoffrey of Monmouth adapted this to Lot, king of Lothian, in his influential chronicle Historia Regum Britanniae, portraying him as King Arthur's brother-in-law and ally. In the wake of Geoffrey's writings, Lot appeared regularly in later works of chivalric romance. 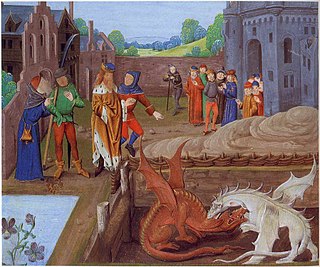 Historia regum Britanniae, originally called De gestis Britonum, is a pseudohistorical account of British history, written around 1136 by Geoffrey of Monmouth. It chronicles the lives of the kings of the Britons over the course of two thousand years, beginning with the Trojans founding the British nation and continuing until the Anglo-Saxons assumed control of much of Britain around the 7th century. It is one of the central pieces of the Matter of Britain.

Idwal Iwrch, or Idwal ap Cadwaladr, is a figure in the genealogies of the kings of Gwynedd. He was the son of King Cadwaladr ap Cadwallon and the father of King Rhodri Molwynog. William Wynne places Cynan Dindaethwy as his son, but other sources have Cynan as the son of Rhodri. The records of this era are scanty, and Idwal's name appears only in the pedigrees of later kings and in a prophecy found in two 14th-century Welsh manuscripts, which says that he will succeed his father Cadwaladr as king. 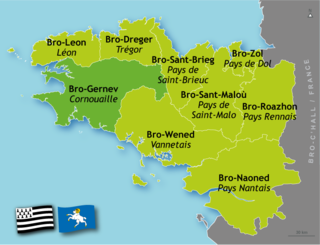 Cornouaille is a historical region on the west coast of Brittany in West France. The name is cognate with Cornwall in neighbouring Great Britain. This can be explained by the settlement of Cornouaille by migrant princes from Cornwall who created an independent principality founded by Rivelen Mor Marthou, and the founding of the Bishopric of Cornouaille by ancient saints from Cornwall. Celtic Britons and the settlers in Brittany spoke a common language, this language would evolve into Breton, Welsh and Cornish.

Rhodri Molwynog, also known as Rhodri ap Idwal was an 8th-century king of Gwynedd. He was listed as a King of the Britons by the Annals of Wales. 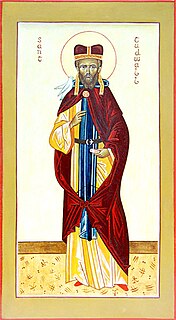 Saint Tudwal, also known as Tual, Tudgual, Tugdual, Tugual, Pabu, Papu, or Tugdualus (Latin), was a Breton monk, considered to be one of the seven founder saints of Brittany.

Domnonée is the modern French form of Domnonia or Dumnonia, a historic kingdom in northern Armorica (Brittany) founded by British immigrants from Dumnonia fleeing the Saxon invasions of Britain in the early Middle Ages. Headed by the same ruling family, it was variously separated from or united with its motherland, and its Latin name was used for both indiscriminately. The mainland territory of Domnonée included Trégor, Dol-de-Bretagne through to Goélo, and Penthièvre. 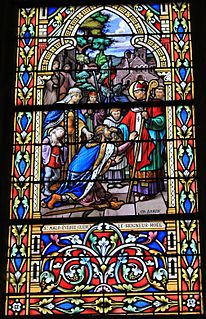 King Hoel, also known as Sir Howel and Saint Hywel, was a late 5th- and early 6th-century member of the ruling dynasty of Cornouaille. He may have ruled Cornouaille jointly after the restoration of his father, Budic II of Brittany, but he seems to have predeceased his father and left his young son, Tewdwr, as Budic's heir.

Hywel ap Rhodri Molwynog as he was improperly called due to lack of knowledge of the genealogies by men like John Edward Lloyd, but in fact was Hywel ap Caradog was King of Gwynedd. He rose to power following a destructive dynastic struggle in which he deposed his cousin, King Cynan Dindaethwy ap Rhodri. During Hywel's reign Gwynedd's power was largely confined to Anglesey. It was a time of substantial territorial loss to Mercia.

Y Mab Darogan is a messianic figure of Welsh legend, destined to force the Germanic Anglo-Saxons and Vikings out of Britain and reclaim it for its Celtic Briton inhabitants. A number of figures have been called Y Mab Darogan in history ). An extensive corpus of medieval Welsh prophetic verse, beginning with Armes Prydain, is centred on the figure of Y Mab Darogan. 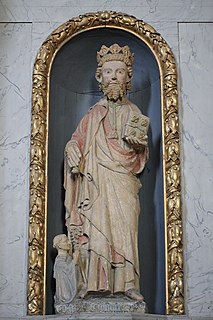 Saint Judicael or Judicaël (Welsh:Ithel), also spelled Judhael, was the King of Domnonée, part of Brittany in France, in the mid-7th century and later revered as a Roman Catholic saint.

Idwal is Welsh for Lord of the wall and may refer to: