MacDiarmid was born in Masterton, New Zealand as one of five children – three brothers and two sisters. His family was relatively poor, and the Great Depression made life difficult in Masterton, due to which his family shifted to Lower Hutt, a few miles from Wellington, New Zealand. At around age ten, he developed an interest in chemistry from one of his father's old textbooks, and he taught himself from this book and from library books.

MacDiarmid was educated at Hutt Valley High School and Victoria University of Wellington. [6]

In 1943, MacDiarmid passed the University of New Zealand's University Entrance Exam and its Medical Preliminary Exam. [7] He then took up a part-time job as a "lab boy" or janitor in Victoria University of Wellington, during his studies for a BSc degree, which he completed in 1947. [7] He was then appointed demonstrator in the undergraduate laboratories. [7] After completing an MSc in chemistry from the same university, he later worked as an assistant in its chemistry department. [6] It was here that he had his first publication in 1949, in the scientific journal Nature. [7] He graduated in 1951 with first class honours, and won a Fulbright Fellowship to the University of Wisconsin–Madison. He majored in inorganic chemistry, receiving his M.S. degree in 1952 and his PhD in 1953. He then won a Shell Graduate Scholarship, which enabled him to go to Sidney Sussex College, Cambridge, where he completed a second PhD in 1955. [6] [8]

MacDiarmid worked in the School of Chemistry at the University of St Andrews in Scotland for a year as a member of the junior faculty. He then took a faculty position in chemistry at the University of Pennsylvania, USA, where he became a full professor in 1964. MacDiarmid spent the greater part of his career on the chemistry faculty of the University of Pennsylvania, where he worked for 45 years. [6] The first twenty years of his research there focused on silicon chemistry.[ citation needed ] He was appointed Blanchard Professor of Chemistry in 1988. [9]

In 2002 MacDiarmid also joined the faculty of the University of Texas at Dallas. [10]

His best-known research was the discovery and development of conductive polymers—plastic materials that conduct electricity. He collaborated with the Japanese chemist Hideki Shirakawa and the American physicist Alan Heeger in this research and published the first results in 1977. [11] The three of them shared the 2000 Nobel Prize in Chemistry for this work. [12] [13] [14] [15]

The Nobel Prize was awarded for the discovery that plastics can, after certain modifications, be made electrically conductive. [16] The work progressed to yield important practical applications. Conductive plastics can be used for anti-static substances for photographic film and 'smart' windows that can exclude sunlight. Semi-conductive polymers have been applied in light-emitting diodes, solar cells and displays in mobile telephones. Future developments in molecular electronics are predicted to dramatically increase the speed while reducing the size of computers.[ citation needed ]

MacDiarmid also travelled around the world for speaking engagements that impressed upon listeners the value of globalising the effort of innovation in the 21st century. In one of his last courses, in 2001, MacDiarmid elected to lead a small seminar of incoming freshmen about his research activities. Overall, his name is on over 600 published papers and 20 patents. [10] MacDiarmid was also active as a naturist and nudist, and considered himself a sun-worshipper and keen waterskier. [17] [16] [18]

Towards the end of his life, MacDiarmid was ill with myelodysplastic syndrome. In early February 2007 he was planning to travel back to New Zealand, when he fell down the stairs in his home in Drexel Hill, Pennsylvania, a suburb of Philadelphia, [22] and died on 7 February 2007. [23] He is buried at Arlington Cemetery in Drexel Hill.

Alan MacDiarmid was a first cousin of New Zealand expatriate painter Douglas MacDiarmid. The year after Alan received the Nobel Prize for Chemistry, Douglas painted a portrait of his cousin for the New Zealand Portrait Gallery. [24] 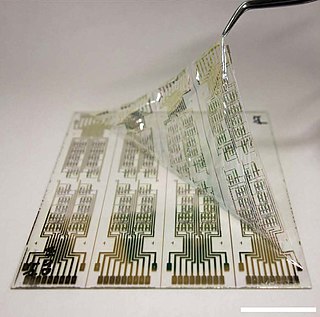 Molecular electronics is the study and application of molecular building blocks for the fabrication of electronic components. It is an interdisciplinary area that spans physics, chemistry, and materials science. The unifying feature is use of molecular building blocks to fabricate electronic components. Due to the prospect of size reduction in electronics offered by molecular-level control of properties, molecular electronics has generated much excitement. It provides a potential means to extend Moore's Law beyond the foreseen limits of small-scale conventional silicon integrated circuits.

The year 2000 in science and technology involved some significant events.

Polymer chemistry is a sub-discipline of chemistry that focuses on the chemical synthesis, structure, chemical and physical properties of polymers and macromolecules. The principles and methods used within polymer chemistry are also applicable through a wide range of other chemistry sub-disciplines like organic chemistry, analytical chemistry, and physical chemistry Many materials have polymeric structures, from fully inorganic metals and ceramics to DNA and other biological molecules, however, polymer chemistry is typically referred to in the context of synthetic, organic compositions. Synthetic polymers are ubiquitous in commercial materials and products in everyday use, commonly referred to as plastics, and rubbers, and are major components of composite materials. Polymer chemistry can also be included in the broader fields of polymer science or even nanotechnology, both of which can be described as encompassing polymer physics and polymer engineering.

Polyacetylene (IUPAC name: polyethyne) usually refers to an organic polymer with the repeating unit (C2H2)n. The name refers to its conceptual construction from polymerization of acetylene to give a chain with repeating olefin groups. This compound is conceptually important, as the discovery of polyacetylene and its high conductivity upon doping helped to launch the field of organic conductive polymers. The high electrical conductivity discovered by Hideki Shirakawa, Alan Heeger, and Alan MacDiarmid for this polymer led to intense interest in the use of organic compounds in microelectronics (organic semiconductors). This discovery was recognized by the Nobel Prize in Chemistry in 2000. Early work in the field of polyacetylene research was aimed at using doped polymers as easily processable and lightweight "plastic metals". Despite the promise of this polymer in the field of conductive polymers, many of its properties such as instability to air and difficulty with processing have led to avoidance in commercial applications.

Polypyrrole (PPy) is a type of organic polymer formed by the polymerization of pyrrole. It is a solid with the formula H(C4H2NH)nH. Upon oxidation, polypyrrole converts to a conducting polymer.

Polyaniline (PANI) is a conducting polymer of the semi-flexible rod polymer family. Although the compound itself was discovered over 150 years ago, only since the early 1980s has polyaniline captured the intense attention of the scientific community. This interest is due to the rediscovery of high electrical conductivity. Amongst the family of conducting polymers and organic semiconductors, polyaniline has many attractive processing properties. Because of its rich chemistry, polyaniline is one of the most studied conducting polymers of the past 50 years. 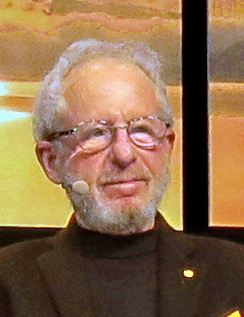 Polymer science or macromolecular science is a subfield of materials science concerned with polymers, primarily synthetic polymers such as plastics and elastomers. The field of polymer science includes researchers in multiple disciplines including chemistry, physics, and engineering.

Polythiazyl, (SN)x, is an electrically conductive, gold- or bronze-colored polymer with metallic luster. It was the first conductive inorganic polymer discovered and was also found to be a superconductor at very low temperatures. It is a fibrous solid, described as "lustrous golden on the faces and dark blue-black", depending on the orientation of the sample. It is air stable and insoluble in all solvents.

Mrinal Thakur is a professor in the Department of Mechanical Engineering of Auburn University in Alabama, USA. He holds a series of patents on electrically conductive polymers. Thakur claims that the 2000 Nobel Prize in chemistry to Alan J. Heeger, Alan MacDiarmid and Hideki Shirakawa was awarded for a scientific result he disproved in 1988: that only conjugated polymers could conduct electricity. 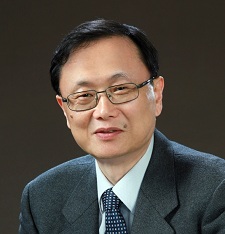 Park Yung-woo is a South Korean physicist, who has worked in the field of materials science.