Last updated February 29, 2020
This article is about the current Moroccan royal family. For the former ruling dynasty of Egypt and Sudan, see Muhammad Ali dynasty.

The organisation of the sultanate developed under Ismail Ibn Sharif (1672–1727), who, against the opposition of local tribes, began to create a unified state. Because the Alaouites had difficult relations with many of the country's Berber and Bedouin-Arab tribes, Isma'īl formed a new army of black slaves, the Black Guard. However, the unity of Morocco did not survive his death—in the ensuing power struggles the tribes became a political and military force once again.

During Muhammad III's reign (1757–1790) the kingdom was once again united and the administration reorganised. A renewed attempt at centralisation was abandoned, and the tribes were allowed to preserve their autonomy. Under Abderrahmane (1822–1859) Morocco fell under the influence of the European powers. After Morocco supported the Algerian independence movement of Emir Abd al-Qadir, it was attacked and defeated by the French in 1844 at the Battle of Isly and made to abandon its support.

During the reigns of Muhammad IV (1859–1873) and Hassan I (1873–1894), the Alaouites tried to foster trading links, above all with European countries and the United States. The army and administration were also modernised to improve control over the Berber and Bedouin tribes. With the war against Spain (1859–1860) came direct involvement in European affairs. Although the independence of Morocco was guaranteed at the Treaty of Madrid (1880), the French gained ever greater influence. German attempts to counter this growing influence led to the First Moroccan Crisis of 1905–1906 and the Second Moroccan Crisis of 1911.

Eventually the Moroccans were forced to recognise the French protectorate through the Treaty of Fez, signed on December 3, 1912. At the same time the Rif area of northern Morocco was raised under Spanish control.

Morocco's economy hasn't always been stable especially after the 1850s it had to repay damages and war reparations after that it slowly bounced back but never completely.

From 1631 to 1666 the Alaouite dynasty ruled as princes of Tafilalt:

In 1666 Mulay Al-Rashid was proclaimed Sultan of Morocco at Fez:

History of human habitation in Morocco spans since Lower Paleolithic, with the earliest known being Jebel Irhoud. Much later Morocco was part of Iberomaurusian culture, including Taforalt. It dates from the establishment of Mauretania and other ancient Berber kingdoms, to the establishment of the Moroccan state by the Idrisid dynasty followed by other Islamic dynasties, through to the colonial and independence periods.

Moulay Ismail ibn Sharif, born around 1645 in Sijilmassa and dead on 22 March 1727 at Meknes, was an Arab Sultan of Morocco from 1672–1727, as the second ruler of the Alaouite dynasty. He was the seventh son of Moulay Sharif and was governor of the Kingdom of Fez and the north of Morocco from 1667 until the death of his half-brother, Sultan Moulay Rashid in 1672. He was proclaimed sultan at Fez, but spent several years in conflict with his nephew Moulay Ahmed ben Mehrez, who also claimed the throne, until the latter's death in 1687. Moulay Ismail's 55-year reign is the longest of any sultan of Morocco.

Idris I, also known as Idris ibn Abdillah, was the founder of the Arab Idrisid dynasty in part of northern Morocco in alliance with the Berber tribe of Awraba. He ruled from 788 to 791. He is credited with founding the dynasty that established Moroccan statehood and is regarded as the "founder of Morocco". He was the great-great-great-grandson of the Islamic Prophet Muhammad.

Sharif is a traditional Arabic title. The origin of the word is an adjective meaning "noble", "highborn". The feminine singular is sharifa(h) or shareefa(h). The masculine plural is Ashraf.

The Alids are the dynasties descended from Ali ibn Abi Talib, cousin and son-in-law of the Islamic prophet Muhammad. Shia Muslims consider him the First Imam appointed by Muhammad and the first rightful caliph.

The Saadi dynasty or Saadian dynasty was an Arab Moroccan dynasty, which ruled Morocco from 1549 to 1659. 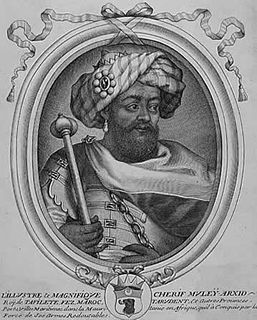 Al-Rashid Ben Ali Al-Charif, known as Mulai Al-Rashid, was Sultan of Morocco from 1666 to 1672. He was the son of the founder of the Alaouite Dynasty, Moulay Ali Cherif, who took power in Tafilalt around 1630. In 1635 al-Rashid's brother Muhammad Ibn Sharif succeeded their still living father. After the death of their father, Mulai Mohammed brought Tafilalt, the Draa River valley and the Sahara region under Alaouite power. However, due to internal feuding war broke out between the brothers and Mohammed was killed by troops of al-Rashid in 1664.

Abul Amlak Sidi Muhammad as-Sharif ibn 'Ali was an Arab prince of Tafilalt from 1631 to 1636. He was born before 9 November 1589 as the sixth son of 'Ali ibn Muhammad as-Sharif al-Marrakchi. Other names or spellings of his name are, among others: Moulay Ali Cherif, Moulay Muhammad I, Moulay Mohammed I, Sharif Sultan Abul, Muhammad al-Sharif, etc. He is considered to have been the founder of the Alaouite Dynasty of Morocco. He began to increase his power in the Tafilalt during the anarchy following the death of the Saadi ruler Ahmad al-Mansur and ruled that region from 1631 to 1636. He abdicated the throne of Tafilalt in 1636 in favour of his eldest of fifteen sons, Muhammad ibn Sharif.

The Draa is Morocco's longest river, at 1,100 kilometres (680 mi). It is formed by the confluence of the Dadès River and Imini River. It flows from the High Atlas mountains, initially south-eastward to Tagounite, and from Tagounite mostly westwards to its mouth in the Atlantic Ocean somewhat north of Tan-Tan. In 1971, the (El) Mansour Eddahabi dam was constructed to service the regional capital of Ouarzazate and to regulate the flow of the Draa. Most of the year the part of the Draa after Tagounite falls dry.

Juan Picasso González was a Spanish military man and general who participated in the Rif War with the Spanish Army of Africa in late 19th century and early 20th century. He was a military investigation instructor known for "Expediente Picasso" (Picasso Files), an investigation report related to the historical defeat of the Spanish Army, some 20,000 soldiers and officers, of which some 8,000 were killed, against the Riffian rebels at the Battle of Annual, on July 1,1921; known as The disaster of Annual.

Sultan Sidi Muhammad ibn Sharif ibn Ali ibn Muhammad was an Arab ruler of Tafilalt, Morocco between 1636-64. He was the eldest son of Moulay Ali Cherif and came to power when his father stepped down. He was exiled from his realms in 1664 and was killed on 2 August 1664 in a battle on the plain of Angad by troops of his half-brother Al-Rashid of Morocco.

Abu al-Qasim az-Zayyani or, in full, Abu al-Qasim ibn Ahmad ibn Ali ibn Ibrahim az-Zayyani (1734/35–1833) was a Moroccan historian, geographer, poet and statesman from the Berber zayane tribe in Morocco. He undertook diplomatic missions to the Ottoman court and engineered government attempts to bring tribes under central authority. His writings include several historical accounts of the Ottoman and Alaouite dynasties. Az-Zayyani wrote fifteen works in the field of history and geography. Some authors even consider him the greatest historian of Morocco.

Mohammed Akensus or Abu Abdallah Mohammed ben Ahmad Akensus al-Marrakushi was a well-known Moroccan historian and a minister under Mulay Slimane and moulay Abd al-Rahman. He is from the Berber tribe of Ida u-Kansus which inhabited the Sous region in southern Morocco.

Lalla Aisha Mubarka, often referred to as Zaydana or Zaidana, was the chief spouse of sultan Ismail Ibn Sharif of Morocco. She had an acknowledged influence over the affairs of state through her personal influence over the sultan. Some Europeans are said to have called her the "Empress of Morocco".

Kasbah Cherarda is a kasbah in the city of Fez, Morocco, located on the northern outskirts of Fes el-Jdid. It was initially referred to as Kasbah el-Khemis, the "Thursday Fort" as there was an open market held every Thursday outside the wall. It was first established during the Saadi dynasty in the 16th century, and later refurbished by the Alaouite Sultan Mulai al-Rashid during 1664-1672 as a fortress. It is among the 13 fortresses set up throughout the history to guard the city of Fez. Several tribes had occupied the fort. The tribe of Ashrafah had occupied the fortress during the war between the Sultan and his brother Mohammed, before being deported. 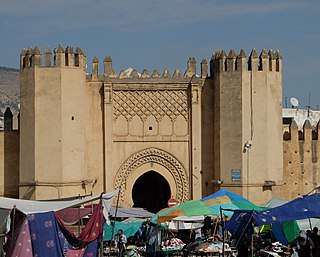 The Kasbah An-Nouar or Kasbah Filali is a walled district and former military enclosure in the old medina of Fez, Morocco. Its name means "citadel of the flowers", but it is sometimes also referred to as Kasbah Filala and Kasbah Chorfa. It is one of several fortified military enclosures or kasbahs that were built around the old city of Fez across different periods.