Alban Skënderaj (Albanian pronunciation:  [alban skəndɛɾaj] ; born 20 April 1982) is an Albanian singer, songwriter, composer, actor, producer and television personality. [2] He was born in Lushnjë and has established himself as a viable alternative and pop rock artist in Albania and the Albanian-speaking world.

Skënderaj rose to essential prominence following his victory in Top Fest (2005). [3] His success continued with the release of his debut albums Melodi (2008) and Fllad Ne Shkretirë (2009). He and his future wife Miriam Cani participated in Festivali i Këngës in 2010 with the song "Ende Ka Shpresë" whereas they finished second. [4]

In 2011, Skënderaj resumed his music career with the release of his third album Ende Ka Shpresë with whom he began to adopt a more mature image. He participated in Kënga Magjike for the first time in 2012 and won the competition rosing again to great prominence in Albania and the neighbouring countries. [5]

Beyond his music career, Skënderaj has been featured as a judge on the Albanian television talent competition series The X Factor Albania and The Voice of Albania. [6] [7]

Alban Skënderaj was born on 20 April 1982 into an Albanian family in the city of Lushnjë, then part of the People's Republic of Albania, present Albania. His father Qerim Skënderaj has served in the Albanian Armed Forces while his mother has worked in a laboratory of the town's aqueduct. [8] He and his family left Albania for political reasons due to the Albanian Civil War in 1997 and relocated to Pistoia in Italy. [9] [10] [11] [12] He has three brothers: Martin, Arbër and Taulant. [13]

After relocating to Italy, his brothers encouraged Skënderaj to pursue music whereas he began to compose songs for himself in the English and Italian languages. He additionally started taking music lessons and began to play guitar. [10] The master and composer Sandro Bartolozzi, his music coach, discovered his talent and took him to Florence, to the Artestudio53 of the arranger Franco Poggiali Berlinghieri, to show him his musical work by which he was inspired. [10] However, he continued singing with different bands at pubs, clubs and other venues. [14]

In 2005, Skënderaj competed in a festival called Top Fest Albania (Second edition), he won first place with "Vetem Ty" (Only You). The verses and the lyric of this song was a real attraction for the teens in all the countries around the world. Then he issued an album named «Fresh in the Desert» with the self-authored songs. On 3 August the same year he appeared at Albanian TV with his music video "Thirrje e Dëshperuar"(A desperate call). A year later he again won first place in the same festival, this time performing in a duet with Kosovar band "Kthjellu"; the winning song was titled "Diçka" (Something). [14]

In 2008, Skënderaj was invited to perform in a live concert held in Tirana, Albania together with some other Albanian singers, there, when he met for the first time Miriam Cani (German/Albanian singer) and then fell in love with each other. In 2013 he made her a proposal at Maldive islands singing his song "Nese thua po"(If you say yes) which became a hit. After 7 years together, on "Albanian Independence Day" 28 November 2015 Miriam gave birth to their first child. [14]

He is also part of the jury in the X Factor. [15] In June 2006 he played the role of Romeo in the Albanian version of Gerard Presgurvic's musical Roméo et Juliette, de la Haine à l'Amour. [16] He sought to represent Albania in the Eurovision Song Contest 2011 in Germany in a duet with Albanian singer and his fiancée Miriam Cani.

In 2018 Alban held a recital concert in Palace of Congresses in Albania. [17]

Adrian Gaxha is a Macedonian-Albanian singer, songwriter, producer and entrepreneur.

Miriam Cani is an Albanian singer-songwriter and television host. She was a member of the successful German pop girl group Preluders. 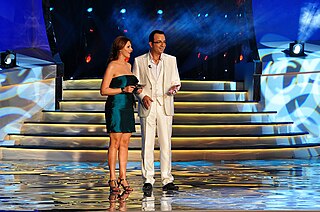 Ardit Gjebrea is an Albanian singer-songwriter, producer and television presenter of the most famous programe in Albania "E Diela Shqiptare" on Tv Klan.

Florjan Mumajesi, known professionally as Flori, is an Albanian recording artist, composer, producer, vocalist, director, singer and songwriter. He is particularly recognised for his work as a composer during which he established himself as one of the most successful composers in Albania and the Albanian-speaking world. Born and raised in Tirana, Mumajesi began his career at an early age and rose to significant recognition after his participations in Kënga Magjike and his eventual victory in 2018. He resumed his earlier career in 2011 with his debut studio album "Detaj" which incorporated musical elements from all of his previous records. 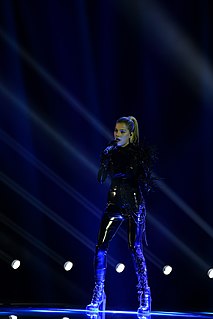 Arilena Ara, also known mononymously as Arilena, is an Albanian singer and songwriter. Born and raised in Shkodër, Arilena achieved national recognition in the Albanian-speaking world when she won the second season of the X Factor Albania in 2013. Her success continued with the participation in the 18th edition of Kënga Magjike finishing in the third place with the song "Nëntori". Due to the success, she rose to recognition in Romania, Russia and Eastern Europe, and peaked at number-one in the Romanian Airplay chart. In 2019, after winning the 58th edition of Festivali i Këngës, she was scheduled to represent Albania in the Eurovision Song Contest 2020 before the contest's cancellation.

Eneda Tarifa is an Albanian singer, actress and television host. She represented Albania in the Eurovision Song Contest 2016, after winning the 54th edition of Festivali i Këngës.

"Marova" is a song performed by Kosovo Albanian singer and songwriter Filloreta Raçi (Fifi). The record was released as a single through Onima under exclusive license from Threedots Productions. It was written by herself and composed for her participation at Kënga Magjike 2019. 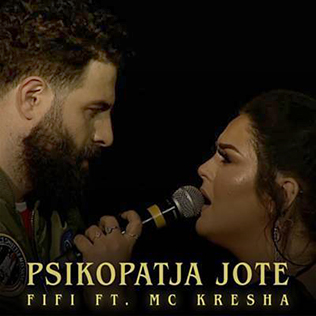 "Psikopatja Jote" is a song performed by Kosovo Albanian singer and songwriter Filloreta Raçi (Fifi) and Kosovo Albanian rapper MC Kresha. The record was released as a single through Acromax Media GmbH and was composed for the duo's participation at Kënga Magjike 2018.

"Nëntori" is a song by Albanian singer Arilena Ara. The song was entirely written by Albanian musician Lindon Berisha and produced by Macedonian producer Darko Dimitrov. It was primarily composed for Arilena's participation in the 18th edition of Kënga Magjike.

Anxhela Peristeri, also known mononymously as Anxhela, is an Albanian singer, songwriter and model. Peristeri emerged as the winner of the 19th edition of Kënga Magjike in 2017. After winning the 59th edition of Festivali i Këngës, she was announced as the Albania's representative for the Eurovision Song Contest 2021.

The Kënga Magjike 2021 is scheduled to be the 22nd edition of the annual Albanian music competition Kënga Magjike. It will be organised by Televizioni Klan and will consist of two semi-finals on 26 and 27 May and the final on 29 May 2021.

David Dreshaj is an Albanian singer.