On 14 March 2008, FSHF were suspended by FIFA for "heavy political interference." This means their national teams were banned from playing official matches, representatives banned from official events, and referees unable to officiate FIFA-sanctioned matches. [3] The ban was subsequently lifted as the political interferences were clarified, and on 27 May 2008, Albania played a friendly against Poland.

The current president of FSHF, Armand Duka, has been at this position since 2002 and won the elections for a third term in 2010. [4]

During the 2009 controversy between FSHF and the Albanian government as to the property of the Qemal Stafa Stadium. UEFA insisted in lobbying that the stadium be given to FSHF ownership so that investments on it can be made. [5] In February 2011 it was decided that the new stadium, which will replace the current one and will cost 60M Euro, will be 75% of FSHF and 25% of the Albanian government. [6]

Klubi i Futbollit Tirana is an Albanian football club based in the country's capital city, Tirana. The men's football club is part of the multi-disciplinary sports club SK Tirana, and is the most successful in Albania, having won 52 recognized major domestic trophies. They play their home games at the Selman Stërmasi Stadium in Tirana and they play in the Kategoria Superiore.

The Albania national football team represents Albania in men's international football competitions and governed by the Albanian Football Association, the governing body for football in Albania. It competes in the three major international tournaments; the FIFA World Cup, UEFA European Championship and UEFA Nations League. Albania was the winner of the 1946 Balkan Cup and the 2000 Malta Rothmans International Tournament. At Euro 2016, Albania made its second appearance at a major men's football tournament after 50 years. 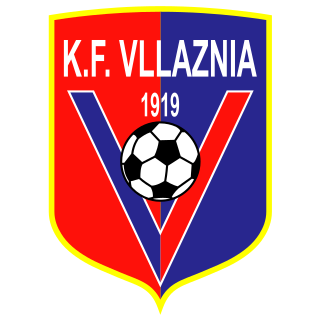 Klubi I Futbollit Vllaznia Shkodër, commonly known as Vllaznia is an Albanian football club based in the city of Shkodër. It is the association football branch of the Vllaznia Sports Club, which was founded on 16 February 1919. It is also the oldest club in Albania which means it is the first club created in Albania. The club have competed in every edition of Kategoria Superiore since 1930, which is the top tier of football in Albania, besides in the 1956-57, 1961-62 and 2018-19 football seasons.

Alban Bushi is an Albanian professional football coach and former player who is the current manager of Albania under-21 and under-20 team. He is nicknamed "Loku".

Football is the most popular sport in Albania, both at a participatory and spectator level. The Sport is governed by the Football Association of Albania (F.SH.F.).

Elis Flamur Bakaj is an Albanian professional footballer who plays as an attacking midfielder or a forward for Belarusian club Rukh Brest.

Alban Bekim Hoxha is an Albanian professional footballer who plays as a goalkeeper for Albanian club Partizani Tirana and the Albania national team.

The 2008–09 season was Klubi i Futbollit Tirana's 70th competitive season, 70th consecutive season in the Kategoria Superiore and 88th year in existence as a football club.

Sokol Cikalleshi is an Albanian professional footballer who plays as forward for Turkish club Konyaspor and the Albania national team.

Klubi i Futbollit Tirana B is an Albanian football club based in Tirana. The club is the B team of Albania's most successful club KF Tirana. It was founded in 1932, but was dissolved before it was refounded on 22 January 2013.

This is a list of Kosovo national football team results from 1993 to 2019.

A UEFA Euro 2016 qualifying match involving the national association football teams of Serbia and Albania took place on 14 October 2014 at Partizan Stadium, in Belgrade, Serbia. The match was abandoned after several on and off the field incidents. Serbian fans had chanted "Ubij, ubij Šiptara", and threw flares and other objects on the pitch. At that point a drone quadcopter carrying an Albanian nationalist banner with an image of Greater Albania appeared on the pitch.

Arena Kombëtare, is an all-seater, multi-purpose football stadium located in the capital city of Tirana which was built on the ground of the former Qemal Stafa Stadium. Officially called Air Albania Stadium for sponsorship reasons. The stadium has a seating capacity of 22,500 constituting the largest stadium in Albania.

Eqerem Memushi is an Albanian retired footballer and current manager of Oriku. During his playing career he was a defender and spent most of his career playing for his hometown club Flamurtari Vlorë and represented as well the Albania national team in years 1990–1991 playing 4 matches.