He has served as a president of the American Economic Association. [2] 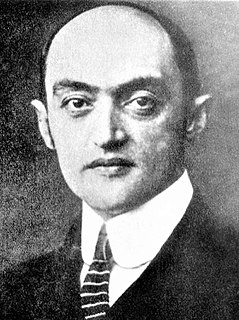 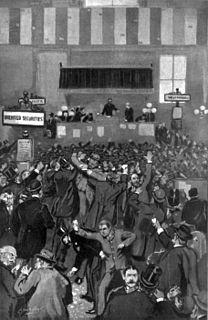 The Panic of 1893 was an economic depression in the United States that began in 1893 and ended in 1897. It deeply affected every sector of the economy, and produced political upheaval that led to the political realignment of 1896 and the presidency of William McKinley.

Michael Albert is an American economist, speaker, writer, and political critic. Since the late 1970s, he has published books, articles, and other contributions on a wide array of subjects. He has also set up his own media outfits, magazines, and podcasts. He is known for helping to develop the socioeconomic theory of participatory economics.

Francis Parkman Jr. was an American historian, best known as author of The Oregon Trail: Sketches of Prairie and Rocky-Mountain Life and his monumental seven-volume France and England in North America. These works are still valued as historical sources and as literature. He was also a leading horticulturist, briefly a professor of horticulture at Harvard University and author of several books on the topic. Parkman wrote essays opposed to legal voting for women that continued to circulate long after his death. Parkman was a trustee of the Boston Athenæum from 1858 until his death in 1893. 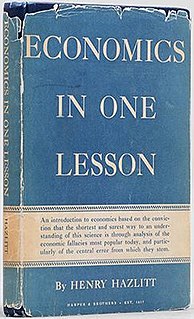 Economics in One Lesson is an introduction to economics written by Henry Hazlitt and first published in 1946. It is based on Frédéric Bastiat's essay Ce qu'on voit et ce qu'on ne voit pas.

Katharine Ellis Coman was an American social activist and professor. She was based at the women-only Wellesley College, Massachusetts, where she created new courses in political economy, in line with her personal belief in social change. As dean, she established a new department of economics and sociology.

Harry Cleaver Jr. is an American scholar, Marxist theoretician, and professor emeritus at the University of Texas at Austin. He is best known as the author of Reading Capital Politically, an autonomist reading of Karl Marx's Capital. Cleaver is currently active in the Zapatista movement in Chiapas, Mexico.

Gordon Tullock was an economist and professor of law and Economics at the George Mason University School of Law. He is best known for his work on public choice theory, the application of economic thinking to political issues. He was one of the founding figures in his field.

Seymour Martin Lipset was an American sociologist. His major work was in the fields of political sociology, trade union organization, social stratification, public opinion, and the sociology of intellectual life. He also wrote extensively about the conditions for democracy in comparative perspective. A socialist in his early life, Lipset later moved to the right, and was often considered a neoconservative.

Stefano Zamagni is an Italian economist. Born in Rimini, Zamagni is Professor of Economics at the University of Bologna. Zamagni is also a fellow of the Human Development and Capability Association and President of the Pontifical Academy of Social Sciences.

The Ecology of Freedom: The Emergence and Dissolution of Hierarchy is a 1982 book by the American libertarian socialist and ecologist Murray Bookchin, in which the author describes his concept of social ecology, the idea that ecological problems are caused by human social problems and can be solved only by reorganizing society along ecological and ethical lines. The book is considered Bookchin's magnum opus, but it has also been criticized as utopian.

Paula S. England, is an American sociologist and Dean of Social Science at New York University Abu Dhabi. Her research has focused on gender inequality in the labor market, the family, and sexuality. She has also studied class differences in contraception and nonmarital births.

Gladys Louise Palmer was an American social statistician who "gained worldwide attention for her research on manpower problems and labor mobility" and for her work on the standardization of labor statistics.

Eleanor Harriet Bernert Sheldon was an American sociologist who was president of the Social Science Research Council SSRC from 1972 to 1979, and was one of the key pioneers in the use of social indicators in sociology. In the 1970s, as multinational corporations recognized the need to appoint women to their boards of directors, Sheldon became the first woman to serve on the boards of several major companies, including Citibank, Mobil, Heinz, and Equitable Holdings.

Ann Dryden Witte is an American economist, known for her work on "a variety of interesting and eclectic problems" and as a "prolific author of books, monographs, and professional articles". She is a professor emerita of economics at Wellesley College, and a research associate of the National Bureau of Economic Research.