Sir Joshua Albert Flynn CB, KCB, (15 September 1863 – 8 October 1933) was a British civil servant who served in South Africa with Lord Kitchener. He was made a Companion of the Order of the Bath in 1910 and knighted in 1919. He was later director of army accounts and subsequently director-general of finance at the Ministry of Pensions. He wrote three novels, one non-fiction work, and over 250 science fiction, romance and adventure stories under the pen name of "Owen Oliver" that were published in the popular magazines of the early 20th century.

Joshua Albert Flynn was born in Sheerness, Kent, on 15 September 1863, the eldest son of Albert Spencer Flynn. He was educated at private schools and Kings College, London, and graduated in mental and moral science from the University of London in 1891. He married Ada, the youngest daughter of James Parkinson, in 1886 and had two sons and three daughters. [1]

Flynn worked as a senior civil servant in the Admiralty in 1884 and the War Office from 1885. He was financial adviser to Lord Kitchener in South Africa and director of army accounts from 1904. [1] He was appointed director-general of finance at the Ministry of Pensions in 1916. [1] He was made a companion of the Order of the Bath in 1910 and knighted in 1919. He retired in 1920. [1] In 1928 he published The Problems of the Civil Service in which he gave much attention to recruitment and promotion, observing that membership of the senior administrative class was in practice restricted to those that had attended Britain's elite universities. [2]

He wrote science fiction, romance, and adventure stories under the pen name of Owen Oliver that were published in the popular magazines of the early 20th century, [3] producing over 250 between 1901 and 1934, including 27 for the science fiction orientated The Yellow Magazine , [4] a sister to Harmsworth's Red Magazine and The Green Magazine, all published by Amalgamated Press. [5] Flynn's science fiction often dealt with the threat to the Earth from an external peril, such as in "The Black Shadow" (1903) in which the remnants of a lunar civilisation are able to control human beings on Earth. In "The Plague of Lights" (1904), aliens invade the Earth, while in "The Long Night" (1906) the nights gradually lengthen due to the effect on the Earth of a comet. In "Days of Darkness" (1927), London is plunged into inexplicable darkness, throwing the city into chaos. [3] "A Martyr to Wireless" (1924) takes a different approach with the invading force being the new technology of radio broadcasting which threatens marital harmony when it enters the home. [4] Flynn's romantic fiction featured in The Windsor Magazine and included titles such as "Little Love" (1906/07), "They Called it Love" (1909/10), and "A House of Love" (1910). [6]

Flynn died on 8 October 1933. [1] His address at the time of his death was 6 Thornton Avenue, Streatham. Probate was granted to Albert James Flynn, engineer, and Walter Alan Flynn, medical practitioner, on an estate of £6,121. [7] He received an obituary in The Times . [8]

All as "Owen Oliver". 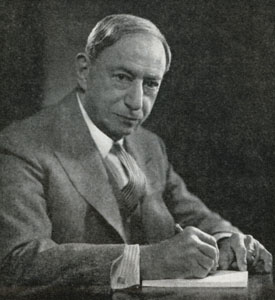 Hugo Gernsback was a Luxembourgish-American inventor, writer, editor, and magazine publisher, best known for publications including the first science fiction magazine. His contributions to the genre as publisher—although not as a writer—were so significant that, along with the novelists H. G. Wells and Jules Verne, he is sometimes called "The Father of Science Fiction". In his honour, annual awards presented at the World Science Fiction Convention are named the "Hugos". 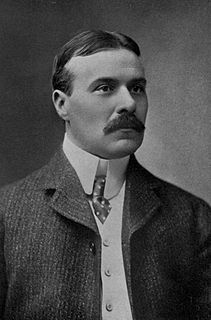 William Tufnell Le Queux was an Anglo-French journalist and writer. He was also a diplomat, a traveller, a flying buff who officiated at the first British air meeting at Doncaster in 1909, and a wireless pioneer who broadcast music from his own station long before radio was generally available; his claims regarding his own abilities and exploits, however, were usually exaggerated. His best-known works are the anti-French and anti-Russian invasion fantasy The Great War in England in 1897 (1894) and the anti-German invasion fantasy The Invasion of 1910 (1906), the latter becoming a bestseller.

Sir Oliver Joseph Lodge, was a British physicist and writer involved in the development of, and holder of key patents for, radio. He identified electromagnetic radiation independent of Hertz's proof and at his 1894 Royal Institution lectures, Lodge demonstrated an early radio wave detector he named the "coherer". In 1898 he was awarded the "syntonic" patent by the United States Patent Office. Lodge was Principal of the University of Birmingham from 1900 to 1920.

Henry Christopher Bailey (1878–1961) was an English author of detective fiction. 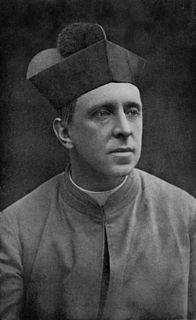 Robert Hugh Benson AFSC KC*SG KGCHS was an English Anglican priest who in 1903 was received into the Roman Catholic Church in which he was ordained priest in 1904. He was a prolific writer of fiction and wrote the notable dystopian novel Lord of the World (1907). His output encompassed historical, horror and science fiction, contemporary fiction, children's stories, plays, apologetics, devotional works and articles. He continued his writing career at the same time as he progressed through the hierarchy to become a Chamberlain to Pope Pius X in 1911 and gain the title of Monsignor. 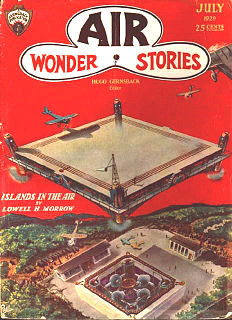 Sir Max Pemberton was a popular English novelist, working mainly in the adventure and mystery genres. He was educated at St Albans School, Merchant Taylors' School, and Caius College, Cambridge. A clubman, journalist and dandy, he frequented both Fleet Street and The Savage Club. 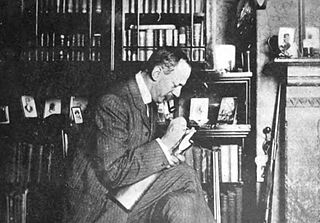 Charles John Cutcliffe Wright Hyne was an English novelist who was also known by the pen name Weatherby Chesney. He is perhaps best remembered as the author of The Lost Continent: The Story of Atlantis. He is also remembered for his Captain Kettle stories and for The Recipe for Diamonds.

Charles Norris Williamson (1859–1920) was a British writer, motoring journalist and founder of the Black and White who was perhaps best known for his collaboration with his wife, Alice Muriel Williamson, in a number of novels and travelogues.

Munsey's Weekly, later known as Munsey's Magazine, was a 36-page quarto American magazine founded by Frank A. Munsey in 1889 and edited by John Kendrick Bangs. Frank Munsey aimed to publish "a magazine of the people and for the people, with pictures and art and good cheer and human interest throughout". Soon after its inception, the magazine was selling 40,000 copies a week. In 1891, Munsey's Weekly adopted a monthly schedule and was renamed Munsey's Magazine.

Frederick George Loring (1869–1951) was an English naval officer and writer, and an early expert in wireless telegraphy.

Ernest Robertson Punshon was an English novelist and literary critic of the early to mid 20th century. He also wrote under the pseudonyms Robertson Halkett and Robertson Halket. Primarily writing on crime and deduction, he enjoyed some literary success in the 1930s and 1940s. Today, he is remembered, in the main, as the creator of Police Constable Bobby Owen, the protagonist of many of Punshon's novels, who was eventually promoted to sergeant, inspector, superintendent and, finally, commander. A popular Scotland Yard detective, Owen appeared in 35 novels from 1933 to 1956. Punshon reviewed many of Agatha Christie's novels for The Guardian on their first publication. Punshon was also a prolific writer of short stories, and a selection of his crime and horror fiction has recently been collected together. 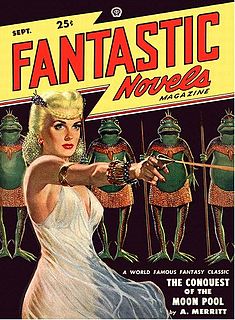 Fantastic Novels was an American science fiction and fantasy pulp magazine published by the Munsey Company of New York from 1940 to 1941, and again by Popular Publications, also of New York, from 1948 to 1951. It was a companion to Famous Fantastic Mysteries. Like that magazine, it mostly reprinted science fiction and fantasy classics from earlier decades, such as novels by A. Merritt, George Allan England, and Victor Rousseau, though it occasionally published reprints of more recent work, such as Earth's Last Citadel, by Henry Kuttner and C. L. Moore.

Professor Alfred Lodge MA, was an English mathematician, author, and the first president of The Mathematical Association.