Albert Nikolayevich Shiryaev (Russian : Альбе́рт Никола́евич Ширя́ев; born October 12, 1934) is a Soviet and Russian mathematician. He is known for his work in probability theory, statistics and financial mathematics.

He graduated from Moscow State University in 1957. From that time until now he has been working in Steklov Mathematical Institute. He earned his candidate degree in 1961 (Andrey Kolmogorov was his advisor) and a doctoral degree in 1967 for his work "On statistical sequential analysis". He is a professor of the department of mechanics and mathematics of Moscow State University, since 1971. As of 2007 [update] Shiryaev holds a 20% permanent professorial position at the School of Mathematics, University of Manchester. He has supervised more than 50 doctoral dissertations and is the author or coauthor of more than 250 publications. [1]

In 1970 he was an Invited Speaker with talk Sur les equations stochastiques aux dérivées partielles at the International Congress of Mathematicians (ICM) in Nice. In 1978 he was a Plenary Speaker with talk Absolute Continuity and Singularity of Probability Measures in Functional Spaces at the ICM in Helsinki. [2]

He was elected in 1985 an honorary member of the Royal Statistical Society and in 1990 a member of Academia Europaea [3] From 1989 to 1991 he was the president of the Bernoulli Society for Mathematical Statistics and Probability. From 1994 to 1998 he was the president of the Russian Actuarial Society. In 1996 he was awarded a Humboldt Prize. He was elected a corresponding member of the Russian Academy of Sciences in 1997 and a full member in 2011. From 1998 to 1999 he was a founding member and the first president of the Bachelier Finance Society. He was made in 2000 Doctor Rerum Naturalium Honoris Causa of Albert Ludwigs University of Freiburg and in 2002 Professor Honoris Causa of the University of Amsterdam. [1] In 2017 he was awarded the Chebyschev gold medal of the Russian Academy of Sciences. [4]

His scientific work concerns different aspects of probability theory, statistics and its applications. He has contributions to:

In probability theory and related fields, a stochastic or random process is a mathematical object usually defined as a family of random variables. Stochastic processes are widely used as mathematical models of systems and phenomena that appear to vary in a random manner. Examples include the growth of a bacterial population, an electrical current fluctuating due to thermal noise, or the movement of a gas molecule. Stochastic processes have applications in many disciplines such as biology, chemistry, ecology, neuroscience, physics, image processing, signal processing, control theory, information theory, computer science, cryptography and telecommunications. Furthermore, seemingly random changes in financial markets have motivated the extensive use of stochastic processes in finance.

The concept of a random sequence is essential in probability theory and statistics. The concept generally relies on the notion of a sequence of random variables and many statistical discussions begin with the words "let X1,...,Xn be independent random variables...". Yet as D. H. Lehmer stated in 1951: "A random sequence is a vague notion... in which each term is unpredictable to the uninitiated and whose digits pass a certain number of tests traditional with statisticians".

Stochastic refers to the property of being well described by a random probability distribution. Although stochasticity and randomness are distinct in that the former refers to a modeling approach and the latter refers to phenomena themselves, these two terms are often used synonymously. Furthermore, in probability theory, the formal concept of a stochastic process is also referred to as a random process. 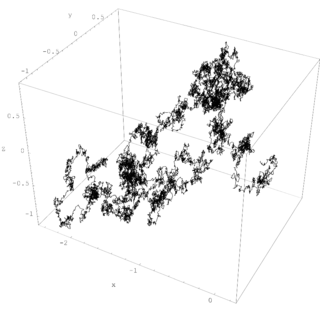 In probability theory and statistics, the term Markov property refers to the memoryless property of a stochastic process. It is named after the Russian mathematician Andrey Markov. The term strong Markov property is similar to the Markov property, except that the meaning of "present" is defined in terms of a random variable known as a stopping time.

Herbert Ellis Robbins was an American mathematician and statistician. He did research in topology, measure theory, statistics, and a variety of other fields. 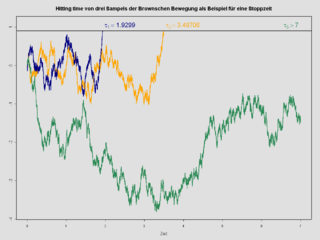 In probability theory, in particular in the study of stochastic processes, a stopping time is a specific type of “random time”: a random variable whose value is interpreted as the time at which a given stochastic process exhibits a certain behavior of interest. A stopping time is often defined by a stopping rule, a mechanism for deciding whether to continue or stop a process on the basis of the present position and past events, and which will almost always lead to a decision to stop at some finite time. 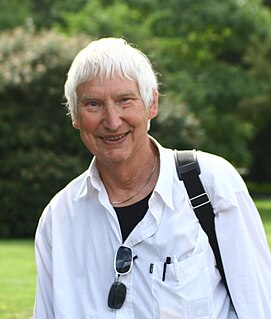 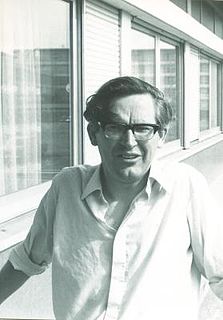 David Williams FRS is a Welsh mathematician who works in probability theory.

Damiano Brigo is an applied mathematician and Chair in Mathematical Finance at Imperial College London. He is known for research in filtering theory and mathematical finance.

Ernesto Mordecki Pupko is a Uruguayan mathematician and professor.

Mark Iosifovich Freidlin is a Russian-American probability theorist who works as a Distinguished University Professor of Mathematics at the University of Maryland, College Park. He is one of the namesakes of the Freidlin–Wentzell theorem in the large deviations theory of stochastic processes, and has also used probability theory to solve partial differential equations.

Richard H. Stockbridge is a Distinguished Professor of Mathematics at the University of Wisconsin-Milwaukee. His contributions to research primarily involve stochastic control theory, optimal stopping and mathematical finance. Most notably, alongside Professors Thomas G. Kurtz, Kurt Helmes, and Chao Zhu, he developed the methodology of using linear programming to solve stochastic control problems. 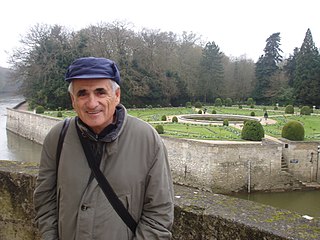 Robert Sh. Liptser was a Russian-Israeli mathematician who made contributions to the theory and applications of stochastic processes, in particular to martingales, stochastic control and nonlinear filtering.