Albin Herzog (1852–1909) was a Swiss mathematician who was director of the ETH Zurich.

Herzog studied in the high schools of Steckborn and Frauenfeld. [1] Between 1870 and 1874 he studied mathematics al Polytechnicum of Zurich [2] and in 1875 he was awarded a doctorate from the University of Zurich. The same year he began teaching at Polytechnicum of Zurich, where he remained the rest of his life, as director of the Mechanical Technical Department and General Manager from 1895 to 1899. [1] During his time as general manager, Albert Einstein flunked the entrance exam, failing in French, chemistry, and biology, but Herzog seeing his extraordinary marks in physics and mathematics, recommended Einstein spend a year in the cantonalschule of Aarau, promising to admit him the following year. [3]

Herzog was an outstanding professor who connected the mathematical basis of mechanics with his practical applications. [4] He also published several articles on mathematical mechanics.

Besides his academic activities, Herzog was president of the escolar commission (1889–1993) and councilor of the city of Zurich. [2]

Gustav Anton Zeuner was a German physicist, engineer and epistemologist, considered the founder of technical thermodynamics and of the Dresden School of Thermodynamics. 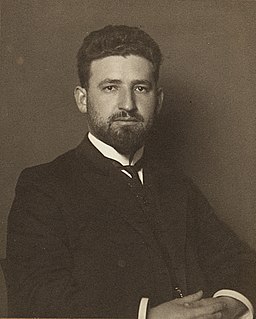 Marcel Grossmann was a mathematician and a friend and classmate of Albert Einstein. Grossmann was a member of an old Swiss family from Zurich. His father managed a textile factory. He became a Professor of Mathematics at the Federal Polytechnic School in Zurich, today the ETH Zurich, specializing in descriptive geometry.

Ludwig Hopf was a German-Jewish theoretical physicist who made contributions to mathematics, special relativity, hydrodynamics, and aerodynamics. Early in his career he was the assistant to and a collaborator and co-author with Albert Einstein.

Ludwig Schlesinger, was a German mathematician known for the research in the field of linear differential equations.

Heinz Rutishauser was a Swiss mathematician and a pioneer of modern numerical mathematics and computer science.

Otto Wilhelm Fiedler was a German-Swiss mathematician, known for his textbooks of geometry and his contributions to descriptive geometry.

Salomon Eduard Gubler (1845–1921) was a Swiss mathematician. With Johann Heinrich Graf he published Einleitung in Die Theorie Der Bessel'schen Funktionen in two volumes (1898–1900). He was the author of very appreciated textbooks on mathematics and numerous reports about the methodology and organization on mathematics teaching, and he was a member of the Swiss commission for the teaching of mathematics and founder of the Swiss association of teachers of mathematics. His main research interest was the Bessel functions.

Johann Heinrich Graf was a Swiss mathematician who was rector of the University of Bern and promoter of the Swiss National Library.

Christian Beyel (1854–1941) was a Swiss mathematician, professor in the Polytechnic of Zurich.

Louis Kollros was a Swiss mathematician. From 1909 to 1948 he was a professor ordinarius of geometry at ETH Zurich.