Albirex Niigata (アルビレックス新潟, Arubirekkusu Nīgata) is a professional football club based in Niigata, Japan. Formed in 1955 as Niigata Eleven SC, it was renamed Albireo Niigata FC in 1995, and Albirex Niigata in 1997. Since 2018, the first division team has competed in the J2 League, the second tier of Japanese football.

For many years it had been a local autonomous amateur club, Niigata 11, that could never hope to see the light of day in an old Japan Soccer League dominated almost entirely by company teams. The creation of the J. League spurred the club to rise, and in the 1990s it began climbing fast through the divisions. [1]

In 1998, Albirex Niigata joined the Japan Football League, and was merged into the J2 league after its creation in 1999. The team gradually became competitive and in 2001 and 2002 it came close to getting promoted to J1 and in 2003, [2] it became the champion of J2 and finally joined the top flight.

The team name is made from combining the star Albireo of the constellation Cygnus (the Swan) and the Latin word Rex meaning 'king'. [3] In 1997, due to copyright issues, the team name was changed from Albireo Niigata to the current Albirex Niigata.

The success of Albirex Niigata had a big impact on the entire Japanese sporting world, including professional baseball. It showed people were more excited than expected for sports in local cities without the population of the metropolitan area in the past, and local citizens feelings influenced many other sports in the region. [4]

Joining the J. League in 1999, its home towns are Niigata and Seiro. Until 2003, it used Niigata Perfectural Sport Ground as the home ground but since 2004, the team began using Niigata Stadium Big Swan as well and now plays most of its games there. In 2003, [5] it set a record for highest attendance in the J. League with the cumulative total of around 660,000. [4] Its practice grounds are Albirex's training facilities in Seiro Albillage and the Ijimino Sports Park (五十公野運動公園, Ijimino Undō Kōen) in Shibata.

The club plays its home games in the Niigata Stadium "Big Swan", which is currently called Denka Big Swan Stadium through a sponsorship deal. The stadium was opened in 2001, and has a capacity of 42,300. Prior to this the club had played its matches in the Niigata City Athletic Stadium constructed in 1938 with a capacity of 18,000.

The stadium was the site of two first round matches and one Round of 16 match in the past 2002 FIFA World Cup. It was also the venue for the 2009 National Sports Festival.

The following clubs are affiliated with Albirex Niigata:

In addition to the J-1 Albirex Niigata football team, there is a Niigata Albirex basketball club in the B.League, as well as a ski, snowboard, baseball, and track and field team. Though the teams share the same name, management and finances are completely separate for each team. 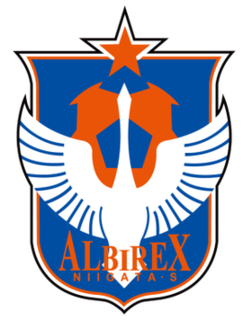 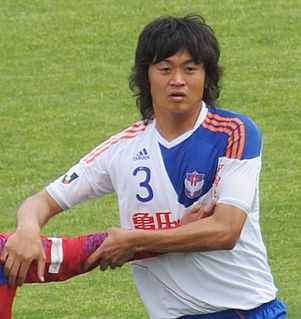 Kazuhiko Chiba is a Japanese footballer. He currently plays for the J2 League club Albirex Niigata.

Zweigen Kanazawa is a Japanese football club based in Kanazawa, Ishikawa Prefecture. They play in the J2 League.

Masaaki Yanagishita is a former Japanese football player and manager.

The 2015 season will be Albirex Niigata FC (Singapore)'s 12th season in the S.League.

Kei Koizumi is a Japanese football player who currently plays for Kashima Antlers in the J1 League. He is primarily a central midfielder but can also play at full-back.

Kyoga Nakamura is a Japanese footballer who plays for Tampines Rovers FC.

The 2017 season is Albirex Niigata Singapore FC's 14th consecutive season in the top flight of Singapore football and in the S.League, having joined the Sleague in 2004. Along with the S.League, the club will also compete in Singapore Cup and the Singapore League Cup. They are the defending champions in 2017.

Hiroyoshi Kamata is a Japanese footballer. He is a striker.

Yasutaka Yanagi is a Japanese footballer. He is a defensive midfielder who plays for J2 League side Tochigi SC.

Shuhei Sasahara is a Japanese former footballer who played as a defender.

Yasuhiro Watanabe is a Japanese football player who plays for Verspah Oita.

Arata Watanabe is a Japanese football player for Albirex Niigata.