Aldo Fabrizi (Italian pronunciation:  [ˈaldo faˈbrittsi] ; born Aldo Fabbrizi; [1] 1 November 1905 – 2 April 1990) was an Italian actor, director, screenwriter and comedian, best known in United Kingdom for the role of the heroic priest in Roberto Rossellini's Rome, Open City and as partner of Totò in a number of successful comedies.

Born in Rome into a humble family, Fabrizi debuted on stage in a suburban theater in 1931. [2] He soon got a local success thanks to his comical sketches and macchiette (i.e. comical monologues caricaturing stock characters), and became a star of the Roman revue and avanspettacolo . [2] He made his film debut during the war, in 1942, and in a short time established himself as one of the most talented actors of the time, spacing from comedy to drama. [2] [3] After a number of successful comedies, in 1945 he played the iconic Don Pietro in the neo-realist drama Rome, Open City , and following the critical and commercial success of the film he had a number of leading roles in other neo-realist films. [4] Already active as a screenwriter, in 1948 he debuted as a director with the drama Immigrants . [2] [4] In the 1950s and 1960s he was often paired on the screen with Totò and with Peppino De Filippo. [3] In 1964 he got a large success on stage with the musical comedy Rugantino , he also toured across Europe, in Latin America and in Broadway. [2] [4]

Like the Italian actor Totò and others, Fabrizi was also initiated to the Scottish Rite Freemasonry. [5] [6]

Fabrizi was married to the singer Beatrice Rocchi, best known with her stage name Reginella, until her death in 1981. [2] His sister Elena Fabrizi was also an actress. [3]

Fabrizi during his career won two Nastro d'Argento Awards, for best actor for Alessandro Blasetti's Prima comunione and for best supporting actor in Ettore Scola's We All Loved Each Other So Much , and a special David di Donatello for his career in 1988. [7] He was also awarded at the 1952 Cannes Film Festival for best screenplay for Cops and Robbers . [2] In 1990 Poste italiane issued a stamp in his honor. [4] 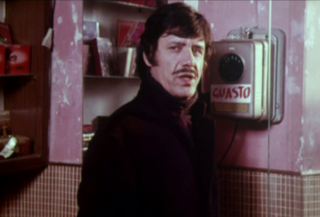 Franco Franchi was an Italian actor, comedian and singer. 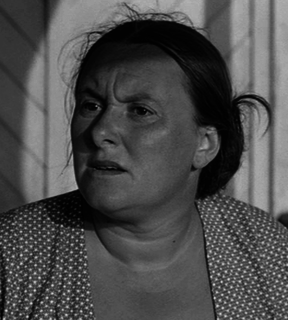 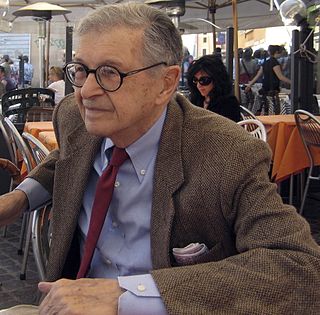 Of Life and Love is a 1954 Italian comedy film directed by Aldo Fabrizi, Giorgio Pastina, Mario Soldati and Luigi Zampa.

Giovanni Grasso was an Italian stage and film actor. He appeared in 82 films between 1910 and 1955. He was born and died in Catania, Sicily, Italy. Born into a family of marionettists, he was cousin and namesake of Giovanni Grasso, a respected stage actor specialized in the Sicilian language repertoire, so he assumed at the beginning of his career the stage name "Giovanni Grasso Junior" to stand out. He was mainly active on stage, often acting together with his wife, Virginia Balestrieri.

Side Street Story is a 1950 Italian comedy film directed by Eduardo De Filippo, who wrote the play upon which the film is based. It was entered into the 1951 Cannes Film Festival. 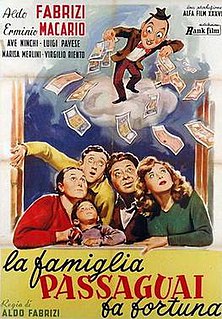 The Passaguai Family is a 1951 Italian film written, starred and directed by Aldo Fabrizi.

Alba Arnova was an Italian-Argentine ballerina and film actress. 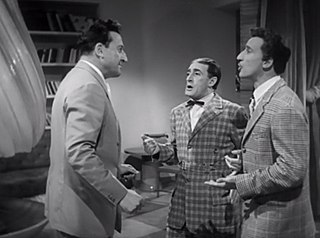 Mario Castellani was an Italian comic actor, best known as the sidekick of famous comic actor Antonio De Curtis (Totò). He appeared with the latter in all his major movies, as well as many of Totò's theatre productions. 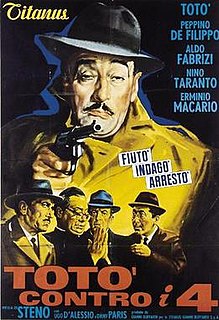 Totò contro i quattro, internationally released as Toto vs. the Four, is a 1963 Italian comedy film directed by Steno. Despite its title, it was not a true fusion between Totò and the four, but the film consists in interwoven episodies in which Totò makes pair from time to time with one of them. It was defined as a "winningly funny police farce".