Alec Head (born August 1924) is a French horse trainer and breeder. He is the owner of Haras du Quesnay, located near Deauville. A descendant of the trainers who founded the English Racing Colony in Chantilly, Oise, Head's grandfather was a jockey-turned-trainer, as was his father William Head who was a very successful jockey, trainer, and owner in both flat racing and steeplechase events.

As of 2018, Head was still participating in interviews about his career. [1]

Head undertook a massive restoration of the facilities and in 1959 brought in the farm's first stallion. Over the years he and his wife Ghislaine developed Haras du Quesnay into one of the leading stud farms in France with horses acquired from across Europe and the United States.

The farm would be home to prominent sires and broodmares including 1968 Kentucky Derby winner Dancer's Image.

In the 1960s, Head reportedly was training 140 horses, the majority being owned by Pierre Wertheimer or the Aga Khan IV. [2]

Head's children have been distinguished participants in the horse racing industry. Daughter Martine is involved with managing Haras du Quesnay, son Freddy was a leading jockey and later trainer, and daughter Criquette Head is one of France's leading trainers and the most successful female thoroughbred trainer in the world.

Haras du Quesnay, known as "Le Quesnay", is a thoroughbred horse breeding farm in France about four miles outside the city of Deauville on 3 km².

Wertheimer et Frère is a Thoroughbred horse racing and breeding business partnership between brothers Alain and Gérard Wertheimer of France. 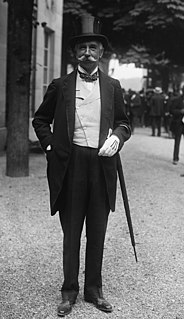 Count Evremond de Saint-Alary (1868–1941) was a leading owner and breeder of Thoroughbred racehorses in France. Heir of a well known family from the French West Indies, as a young man in his twenties Saint-Alary became involved in horse racing and in the early 1890s acquired Haras de Saint Pair du Mont, a horse breeding farm at Le Cadran near Cambremer in Calvados, Normandy.

Maskette (1906–1930) was an American Thoroughbred Hall of Fame racehorse who never lost a race against other fillies.

Ardan (1941–1959) was a French Thoroughbred racehorse. In a racing career which lasted from 1943 until 1946 he ran twenty-three times and won sixteen races. He was the leading racehorse in France in 1944 when his wins included the Prix du Jockey Club and the Prix de l'Arc de Triomphe. He was retired to stud at the end of the 1946 season and had limited success as a stallion.

Gifford A. Cochran was an American entrepreneur and sportsman from New York City. During the latter part of the 19th century and the first decades of the 20th century, he became wealthy in the carpet making industry.

Finasseur (1902–1909) was a French Thoroughbred racehorse who, at age three, won the two most prestigious races in France.

Maintenon was a French Thoroughbred racehorse. He was bred by Gaston Dreyfus at his Haras du Perray in Les Bréviaires, Yvelines. Maintenon was out of the mare, Marcia, and sired by Le Sagittaire, a multiple winner of what today are Group One races.

Anabaa was an American-bred champion Thoroughbred racehorse who was trained in France during a racing career which lasted from September 1995 to October 1996. Anabaa failed to win until the age of four, but in 1996 he won his first six starts including two Group One races; the July Cup in England and the Prix Maurice de Gheest in France. At the end of the season he was named European Champion Sprinter at the Cartier Racing Awards. He later had a successful career at stud, becoming particularly known as the sire of Goldikova.

Bering was a British-bred, French-trained Thoroughbred racehorse. He won five of his seven starts, including the Prix du Jockey Club in 1986. On his final start he finished second to Dancing Brave in the Prix de l'Arc de Triomphe. He was bred and owned by Alec Head, and trained by his daughter Criquette Head. After retiring from racing Bering had some success as a stallion, with his progeny including 2000 Guineas Stakes winner Pennekamp and Poule d'Essai des Poulains winner American Post.

Arctic Tern was an American-bred, French-trained Thoroughbred racehorse and sire. He was campaigned at the highest level in Europe for three seasons, winning four of his twenty-one races including the Prix Thomas Bryon in 1975, the Prix de Fontainebleau in 1976 and the Prix Ganay (1977). He was also placed in several major races including the Prix Lupin and the Eclipse Stakes. After his retirement from racing, Arctic Tern became a successful breeding stallion with the best of his progeny being Bering.