Alec Stock was born in Peasedown St John, Somerset, and played as an inside-forward for Charlton Athletic and Queens Park Rangers before the Second World War and guested for several other clubs during the hostilities. He joined Yeovil Town in 1946.

It was perhaps Stock's time as manager of Queens Park Rangers where he is most fondly remembered. It was during his spell in the 1960s that coincided with the development of the club with chairman Jim Gregory. The team enjoyed unprecedented success in 1967 and 1968 winning consecutive promotions with the club reaching the First Division for the first time and becoming the first Third Division team to win the Football League Cup in 1967 beating then First Division West Bromwich Albion 3–2 in a come from behind win. Stock had a focus on youth bringing many of the team through the club's youth system (including Frank Sibley, Tony Hazell, Roger Morgan, Ian Morgan and Mick Leach) as well as blending characters such as Rodney Marsh and Mark Lazarus into the set up.

With internal pressures mounting in the club following the 1967–68 season however, Stock was absent for three months, suffering from asthma. [1] In his book A Little Thing Called Pride Stock tells how Jim Gregory sacked him in 1968 for being ill, just as he thought he was about to return to the helm and save Rangers from relegation. [2] He later had success with Luton Town who he helped to promotion from the Third Division and also with Fulham when he led them to the 1975 FA Cup Final. He briefly returned to be a Director at Queens Park Rangers in the 1977/8 season.

Ron Manager, a character in BBC comedy sketch show The Fast Show is based on Stock, told by George Best in his autobiography. This was also confirmed by comedy actor Paul Whitehouse , who played Ron Manager, in the documentary, Suits You Sir - The Inside Leg Of The Fast Show. 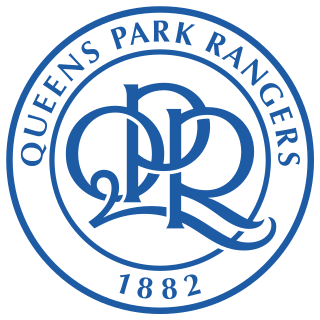 Queens Park Rangers Football Club, commonly abbreviated to QPR, is an English professional football club based in Shepherd's Bush, West London. The club currently competes in the EFL Championship, the second tier of English football. They were founded in 1886 after the merger of Christchurch Rangers and St Judes Institute, although their official founding date is 1882 which is when Christchurch Rangers were first formed. In the early years after the club's formation in its original home of Queen's Park, London, they played their home games at many different grounds, until finally the club settled into its current location at Loftus Road, renamed Kiyan Prince Foundation Stadium at the beginning of the 2019–20 season.

Rodney William Marsh is an English former footballer and football coach; he later worked as a broadcaster. A forward, he won nine caps for England between 1971 and 1973, scoring one international goal.

The 1966–67 season was the 87th season of competitive football in England.

Matthew Rose is an English football coach and former professional player. Rose, who played as a Defender, featured for clubs Arsenal, QPR and Yeovil Town throughout his career.

Ernest James Langley was an English footballer noted for his pacey, rampaging runs from the left fullback position and his long throw-ins. He is remembered particularly fondly by supporters of Fulham for his long service with the club during which he helped them achieve promotion to the First Division during the 1958–59 season; by Queens Park Rangers fans for featuring in the side which won the Third Division title and sensationally beat First Division West Bromwich Albion in the League Cup Final in the 1966–67 season and by non-league side Guildford City where he remains one of their most successful former players. Langley also enjoyed a short spell as an England international, playing three games for his country in 1958.

David Mangnall was an English football player and manager. As a player, he scored 144 goals from 221 appearances in the Football League playing for Leeds United, Huddersfield Town, Birmingham, West Ham United, Millwall and Queens Park Rangers. He was manager of Queens Park Rangers for eight years.

The history of Queens Park Rangers Football Club, a professional association football club based in White City, London, dates back to 1882, when Christchurch Rangers were formed.

The 1987–88 season was the 103rd season in the history of Luton Town Football Club. It was Luton Town's 68th consecutive season in the Football League, and their 71st overall. It was also their sixth successive season in the First Division, and their 12th overall. The season is one of the club's most successful of all time, as Luton Town achieved a ninth-place finish in the league, won the Football League Cup, and reached the FA Cup semi-final and Full Members' Cup final. As League Cup winners, they would normally have qualified for the UEFA Cup, but were denied a first foray into European competition due to the ban on English clubs as a result of the 1985 Heysel disaster continuing for a fourth season.

During the 1982–83 season, the English football club Sheffield Wednesday F.C. was placed 6th in the Football League Second Division. The team reached the semifinal round of the FA Cup.