Aleksander Fredro (20 June 1793 – 15 July 1876) was a Polish poet, playwright and author active during Polish Romanticism in the period of partitions by neighboring empires. His works including plays written in the octosyllabic verse ( Zemsta ) and in prose (Damy i Huzary) as well as fables, belong to the canon of Polish literature. Fredro was harshly criticized by some of his contemporaries for light-hearted humor or even alleged immorality (Seweryn Goszczyński, 1835) which led to years of his literary silence. Many of Fredro's dozens of plays were published and popularized only after his death. His best-known works have been translated into English, French, German, Russian, Czech, Romanian, Hungarian and Slovak. [1]

A playwright or dramatist is a person who writes plays. One of the most famous playwrights is William Shakespeare,(1564-1616). 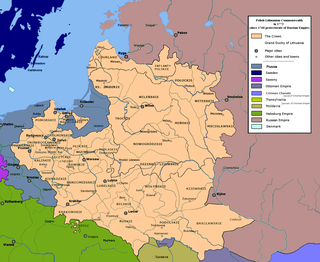 Count Aleksander Fredro, of the Bończa coat of arms, was born in the village of Surochów near Jarosław, then a crown territory of Austria. A landowner's son, he was educated at home. He entered the Polish army at age 16 and saw action in the Napoleonic wars, including the Moscow campaign. His memoir Topsy Turvy Talk, which echoes the style of Laurence Sterne's Tristram Shandy , recounts his military experiences during Bonaparte's last campaign. While in France in 1814, he took an active interest in French drama. After leaving the army he settled on his estate and began as a writer. 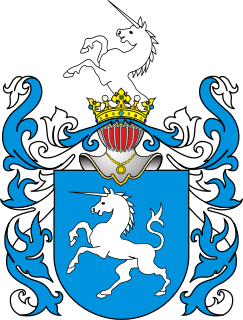 Bończa is a Polish coat of arms. 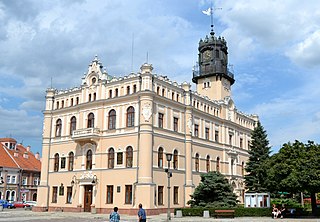 Jarosław is a town in south-eastern Poland, with 38,970 inhabitants, as of 30 June 2014. Situated in the Subcarpathian Voivodeship, previously in Przemyśl Voivodeship (1975–1998), it is the capital of Jarosław County.

Cisleithania was a common yet unofficial denotation of the northern and western part of Austria-Hungary, the Dual Monarchy created in the Compromise of 1867—as distinguished from Transleithania, i.e. the Hungarian Lands of the Crown of Saint Stephen east of ("beyond") the Leitha River.

Fredro made his literary debut in 1817, but he was not interested in the problems of Romanticism. He wrote social comedies about the lifestyle of the Polish nobility and is known for his skill in characterization and plot, as well as the flexibility of his language. His work also features humor typical of folk theatre from the Romantic period, and a fast-paced farce with varying degrees of sophistication.

In a modern sense, comedy is a genre of fiction that refers to any discourse or work generally intended to be humorous or amusing by inducing laughter, especially in theatre, television, film, stand-up comedy, books and novels or any other medium of entertainment. The origins of the term are found in Ancient Greece. In the Athenian democracy, the public opinion of voters was influenced by the political satire performed by the comic poets at the theaters. The theatrical genre of Greek comedy can be described as a dramatic performance which pits two groups or societies against each other in an amusing agon or conflict. Northrop Frye depicted these two opposing sides as a "Society of Youth" and a "Society of the Old." A revised view characterizes the essential agon of comedy as a struggle between a relatively powerless youth and the societal conventions that pose obstacles to his hopes. In this struggle, the youth is understood to be constrained by his lack of social authority, and is left with little choice but to take recourse in ruses which engender very dramatic irony which provokes laughter. 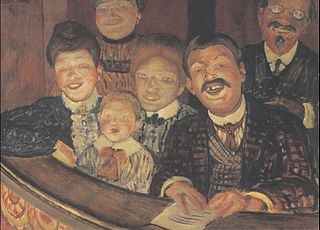 Two of Fredro's fables, The Monkey in the Bath (Małpa w kąpieli) and Paul and Gawel (Paweł i Gaweł), belong to the most popular children's stories in the country. [1] His best-known comedy, Zemsta (The Revenge), was adapted for the screen in Poland by eminent film director Andrzej Wajda in 2002. 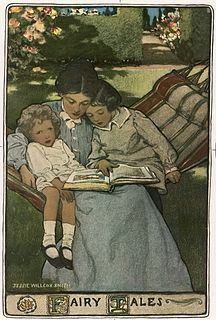 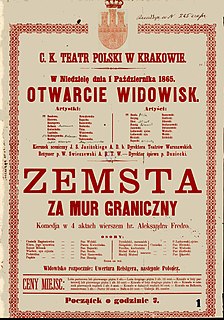 Zemsta(Revenge) is a Polish comedy by Aleksander Fredro, a Polish poet, playwright and author active during Polish Romanticism in the period of partitions. Zemsta belongs to the canon of Polish literature. It is a play in four acts, written in the octosyllabic verse mostly in the vernacular of Lesser Poland (Małopolska); filled with proverbs and paraphrased allusions. 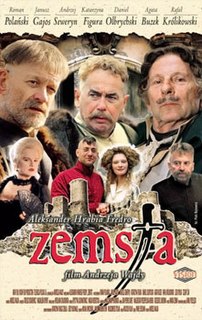 The Revenge is the English title for Zemsta, a film released in 2002, directed by Andrzej Wajda. This film is an adaptation of a perennially popular stage farce of the same name by the Polish dramatist and poet Aleksander Fredro.

Fredro was the maternal grandfather of the head of the Ukrainian Catholic Church, Metropolitan Andrey Sheptytsky. He was commemorated on a Polish postage stamp issued in 1978. 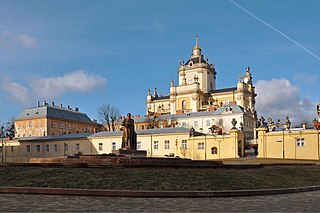 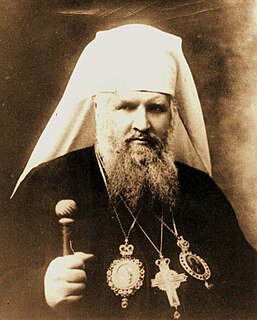 He died on 15 July 1876 in Lviv and was buried in a family grave in Catholic Church of the Assumption of Rudky. 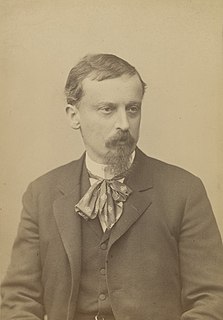 This article presents lists of the literary events and publications in 1834. 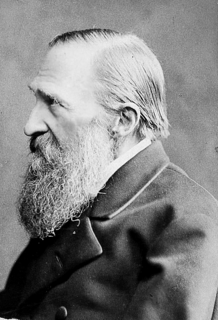 Józef Ignacy Kraszewski was a Polish writer, publisher, historian, journalist, scholar, painter, and author who produced more than 200 novels and 150 novellas, short stories, and art reviews, which makes him the most prolific writer in the history of Polish literature and the seventh most prolific in the world. He is best known for his epic series on the history of Poland, comprising twenty-nine novels in seventy-nine parts. 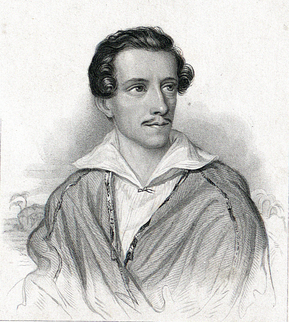 Juliusz Słowacki was a Polish Romantic poet. He is considered one of the "Three Bards" of Polish literature — a major figure in the Polish Romantic period, and the father of modern Polish drama. His works often feature elements of Slavic pagan traditions, Polish history, mysticism and orientalism. His style includes the employment of neologisms and irony. His primary genre was the drama, but he also wrote lyric poetry. His most popular works include the dramas Kordian and Balladyna and the poems Beniowski and Testament mój. 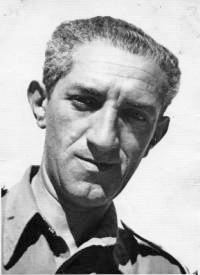 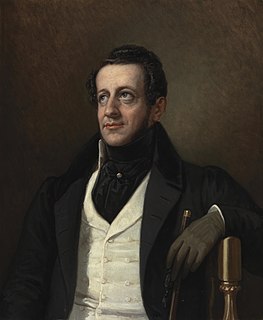 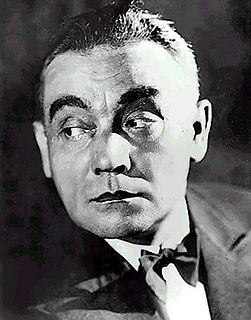 Stefan Jaracz was a Polish actor and theater producer. He served as the artistic director of Ateneum Theatre in Warsaw during the interwar period (1930–32), and within a short period raised its reputation as one of the leading voices for Poland's new intelligentsia, with groundbreaking productions of Danton's Death by Georg Büchner (1931), The Captain of Köpenick by Carl Zuckmayer (1932), as well as popular Ladies and Husars by Aleksander Fredro (1932) and The Open House by Michał Bałucki.

Fortunat Alojzy Gonzaga Żółkowski, Ziółkowski, was a Polish actor, comedist, adaptor, translator, editor of humour magazines, and head of a Polish theatrical family. He was born near Nowogródek. He performed at Teatr Narodowy. He was the father of Alojzy Gonzaga Jazon Żółkowski and Nepomucena Kostecka.

Alojzy Gonzaga Jazon Żółkowski, Ziółkowski was a Polish actor and singer, one of the most prominent Polish comedians. 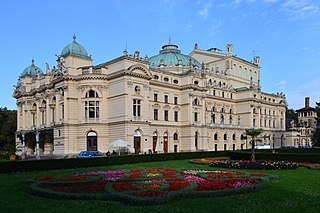 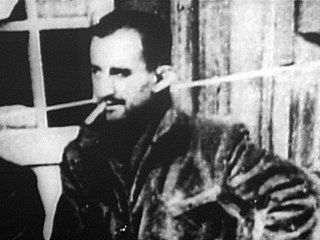 Antoni Bohdziewicz was a Polish screenplay writer and director, best known for his 1956 adaptation of Zemsta by Aleksander Fredro. 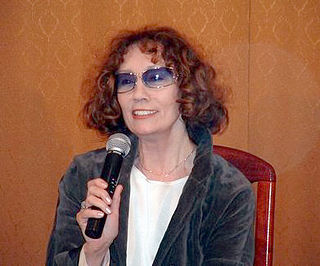 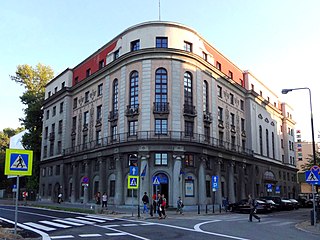 The Ateneum Theatre in Warsaw is a Polish dramatic theatre founded in 1928. It resides in a building erected a year earlier in the interwar Poland as headquarters for the Professional Union of PKP Railway Workers with offices upstairs. After World War II, the severely damaged structure was restored to its former glory with public funds. The state-run theatre reopened in 1951; named after its first and already famous prewar director Stefan Jaracz. 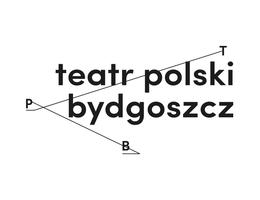 The Polish theatre or Polish: Polski Teatr of Bydgoszcz has been established in 1949, at Adam Mickiewicz Alley N°2, in downtown district. It is the outcome of a long and rich tradition of plays and performance in the city. 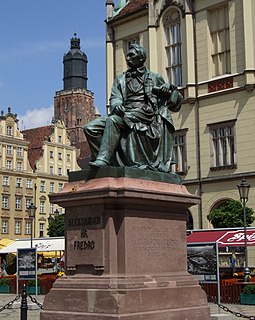 The Aleksander Fredro Monument in Wrocław is a bronze statue dedicated to Polish Romantic-era poet, playwright and author Aleksander Fredro (1793–1876). Originally built in Lviv in 1897 according to Leonard Marconi's design, the monument was transferred to Wrocław in 1956.