Alex Holeh Ahavah (Hebrew : אלכס חולה אהבה‎, Alex Is Lovesick) is a 1986 Israeli cult film directed by Boaz Davidson. It stars Eitan Anshel, Sharon Hacohen, and Uri Kabiri. The film, set in the 1950s, features a boy (Anshel) as the main protagonist and his life as the son of Polish immigrants.

The film is a romantic comedy that takes place in Israel during the austerity period of the 1950s. The main character is Alex, a 12-year-old boy who is about to turn 13 and attend his bar mitzvah.

Alex comes from a poor, dysfunctional family of Polish Jewish origin whose poverty requires them to share their apartment. Their tenant is Faruk, a Persian man whose humorous battle against baldness is a running bit in the film.

At first, Alex falls in love with Mimi, the new girl in his class. Everything changes, however, when his aunt Lola arrives in Israel from Poland to search for a lost love with whom she once lived but who vanished after the Nazi invasion of Poland. Alex falls for his aunt and she responds by providing the soon-to-be 13-year-old with more than familial love.

The film authentically recreates the atmosphere of the country in the 1950s, known as the Austerity in Israel, including the black market, radio broadcasts concentrating on the search for lost relatives, music and pastimes of the 1950s and the era's clothing and dress styles.

The Delinquents is a 1989 Australian coming-of-age romantic drama film directed by Chris Thomson from a screenplay by Clayton Frohman and Mac Gudgeon, based on Criena Rohan's 1962 book of the same name. It stars Kylie Minogue and Charlie Schlatter as the main characters Lola and Brownie, and was filmed in Brisbane, Maryborough and Bundaberg, Queensland.

Alila is a 2003 Israeli film directed by Amos Gitai and starring Yaël Abecassis, Uri Klauzner, and Hanna Laslo. The drama follows half a dozen very different characters through their lives in modern-day Israel, giving Gitai an opportunity to comment on his country's top social issues.

Ma'abarot were immigrant and refugee absorption camps established in Israel in the 1950s, constituting one of the largest public projects planned by the state to implement its sociospatial and housing policies. 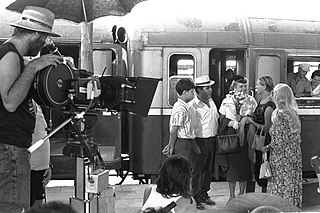 Boaz Davidson is an Israeli film director, producer and screenwriter. He was born in Tel Aviv, Israel and studied film in London at London Film School.

Bourekas films were a genre of Israeli-made comic melodrama films popular in Israel in the 1960s and 1970s.

Hana Laszlo is an Israeli actress and comedian. In 2005, she won a Cannes Film Festival Award for Best Actress for her performance in the film Free Zone. She has also received four Ophir Award nominations.

Verano del '98 was an Argentine telenovela intended for teenagers, broadcast by Telefe from January 26, 1998 until November 24, 2000. Allegedly planned as way to cover a programming gap for the summer of 1998, it became such a hit that it ended lasting three consecutive seasons. After the series aired Telefe came under fire as it became apparent that Verano del '98 was a thinly veiled copy of the popular American teen drama Dawson's Creek, which also started airing around the same time. Gustavo Yankelevich, Telefe's chief artistic director, admitted having attended an early screening of Dawson's Creek in 1997 but thought Sony had lost interest in the project and decided to use it as inspiration when developing Verano del '98. Sony and Telefe settled out of court.

Uri Kabiri is an Israeli songwriter, actor and musical producer.

Avraham Heffner was an Israeli film and television director, screenwriter, author and Professor Emeritus at the Tel-Aviv University. He was a recipient of the Ophir Award for lifetime achievements.

El revólver sangriento is a 1964 Mexican western-drama film directed by Miguel M. Delgado, and starring Luis Aguilar, Lola Beltrán, Flor Silvestre, Emilio Fernández, Manuel Capetillo, Antonio Aguilar, and Irma Dorantes, as credited in the film's theatrical posters. The lead actors were credited in an unusual "rigorous appearance on the screen" style, where the film's main characters are not ordered by importance, but by on-screen appearance. Written for the screen by Alfredo Salazar, the film was a production of Cinematográfica Calderón and follows the account of a silver-plated revolver, which has a deadly curse and falls on the hands of different men.

Amos Lavi was an Israeli stage and film actor. He won three Ophir Awards for the roles he played in the films Sh'Chur, Nashim and Zirkus Palestina. 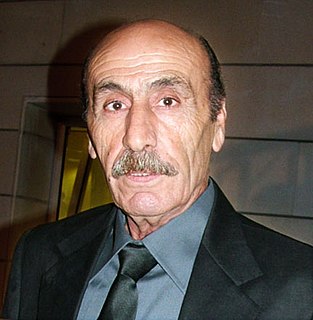 Yosef Shiloach was an Israeli actor.

Pagan Love Song is a 1950 American romantic musical film released by MGM and starring Esther Williams and Howard Keel. Set in Tahiti, it was based on the novel Tahiti Landfall by William S. Stone.

Tony Ray is a Jamaican-Israeli musician. He is most noted as being the pioneer of Reggae in Israel as he released I Feel Like Reggae in 1981 which was the first full-length reggae album in the country.

He Walked Through the Fields is a 1967 Israeli drama directed by Yosef Millo. It was based on a popular novel and play by Moshe Shamir and filmed on Kibbutz Galil Yam.

Avraham Mor was an Israeli actor and voice actor.