Alex Niño (born May 1, 1940) [1] is a Filipino comics artist best known for his work for the American publishers DC Comics, Marvel Comics, and Warren Publishing, and in Heavy Metal magazine.

Alex Niño was born May 1, 1940, [1] in Tarlac, [2] Central Luzon, [3] the Philippines, the son of a professional photographer. Niño studied medicine briefly at the University of Manila before leaving in 1959 [4] to pursue his childhood goal of becoming a comics artist. In 1965, after studying under artist Jess Jodloman, Niño collaborated with Clodualdo del Mundo Sr. to create the feature "Kilabot Ng Persia" ("The Terror of Persia") for Pilipino Komiks . Niño and Marcelo B. Isidro later created the feature "Dinoceras" for Redondo Komiks . Other Valry Philippine work includes the series Gruaga - The Fifth Corner of the World for Pioneer Komiks ; the feature "Mga Matang Nagliliyab" ("The Eyes that Glow in the Dark") with Isidro for Alcala Komiks ; and for PSG Publications, stories of Bruhilda Witch, which were adapted into movies. [2]

Niño was among the vanguard of Philippine comics artists — including Alfredo Alcala, Nestor Redondo, and Gerry Talaoc — recruited for American comic books by DC Comics editor Joe Orlando and publisher Carmine Infantino in 1971, following the success of the pioneering Tony DeZuniga. [5] Niño's earliest U.S. comics credit is penciling and inking the nine-page story "To Die for Magda" in DC Comics' House of Mystery #204 (July 1972) written by Carl Wessler. Niño was soon contributing regularly to such other DC supernatural anthologies as companion title House of Secrets and Forbidden Tales of Dark Mansion , Secrets of Sinister House , Weird War Tales , Weird Mystery Tales , and The Witching Hour . He also drew the jungle-adventure feature "Korak" in some issues of DC's Tarzan . Except for one story for Gold Key Comics' Mystery Comics Digest #17 (May 1974), Niño, who moved to the U.S. in 1974, drew comics exclusively for DC through the beginning of 1975. [6]

In 1973–1974, Niño worked for Pendulum Press, illustrating comic book adaptations of the classic literary works The Time Machine, Moby-Dick , The Three Musketeers , The Invisible Man , and The War of the Worlds . In 1976, several of these stories were reprinted, with added color, by Marvel Comics in their Marvel Classics Comics line. [6]

After drawing some house ads and a frontispiece for two of Marvel Comics' black-and-white comics magazines, Niño teamed with writer-editor Roy Thomas on a 17-page adaptation of the Harlan Ellison short story "'Repent, Harlequin!' Said the Ticktockman" in the black-and-white Unknown Worlds of Science Fiction #3 (May 1975). [8] This led to a 30-page Conan the Barbarian tale, "People of the Dark" in The Savage Sword of Conan #6 (June 1975), also with Thomas, and a 23-page adaptation of the Michael Moorcock novel Behold the Man , with writer Doug Moench in Unknown Worlds of Science Fiction #6 (Nov. 1975). [6] [8]

Niño signed a contract with Ralph Bakshi to work on the film Wizards , and was granted a work visa, but was unable to gain permission from the Philippine government in order to leave for the United States until two months afterward. By the time he had arrived in the U.S., not only had the film's animation been completed, but Niño's visa did not allow him to submit freelance work on any other projects. [9]

Niño did little else for Marvel's color comics, inking two issues of the Luke Cage series Power Man and a "Weirdworld" story in Marvel Premiere #38 (Sept. 1977). [6]

After another hiatus from comics, during which time he worked on designs for the Walt Disney Pictures animated feature Atlantis: The Lost Empire (2001), [12] Niño returned to draw Bliss on Tap Publishing's four-issue series God the Dyslexic Dog (July 2004). In 2008, Niño drew the three-issue miniseries Dead Ahead , by writers Mel Smith and Clark Castillo for Image Comics. [12] Niño collaborated with writer Jeff Lemire on a story for Batman Black and White vol. 2 #2 (Dec. 2013). [13]

Though now officially retired, Niño continues to produce artwork for commissions, attend fan conventions and teaches art classes every year back in the Philippines. In 2015, he self-published a collection of artwork, Art Quest of Alex Niño available from his website.

Comics artist Whilce Portacio was influenced by Niño, saying, "I was exposed to Alex Niño's super-stylized artwork and that had a major influence on me. The design sense and the limitless imagination of Alex Niño really got me inspired to let my creative side imagine new worlds and characters. [15] 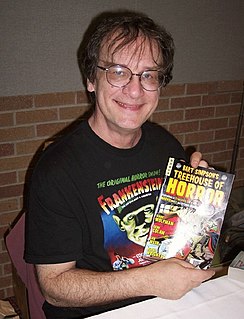 Bernard Albert Wrightson, sometimes credited as Bernie Wrightson, was an American artist, known for co-creating the Swamp Thing, his adaptation of the novel Frankenstein illustration work, and for his other horror comics and illustrations, which feature his trademark intricate pen and brushwork.

James P. Starlin is an American comics artist and writer. Beginning his career in the early 1970s, he is best known for space opera stories; for revamping the Marvel Comics characters Captain Marvel and Adam Warlock; and for creating or co-creating the Marvel characters Thanos, Drax the Destroyer, Gamora and Shang-Chi. Later, for DC Comics, he drew many of their iconic characters, especially Darkseid and other characters from Jack Kirby's Fourth World. For Epic Illustrated, he created his own character, Dreadstar.

Gerard Francis Conway is an American comic book writer, comic book editor, screenwriter, television writer, and television producer. He is known for co-creating the Marvel Comics vigilante antihero the Punisher and scripting the death of the character Gwen Stacy during his long run on The Amazing Spider-Man. At DC Comics, he is known for co-creating the superhero Firestorm, the creation of the character Jason Todd and the villain Killer Croc, and for writing the Justice League of America for eight years. Conway wrote the first major, modern-day intercompany crossover, Superman vs. the Amazing Spider-Man.

Douglas Moench is an American comic book writer notable for his Batman work and as the creator of Moon Knight, Deathlok, Black Mask, Electric Warrior and Six from Sirius. He is also known for his critically acclaimed eight year run on Master of Kung Fu.

Don Newton was an American comics artist. During his career, he worked for a number of comic book publishers including Charlton Comics, DC Comics, and Marvel Comics. He is best known for his work on The Phantom, Aquaman, and Batman. Newton also drew several Captain Marvel/Marvel Family stories and was a fan of the character having studied under Captain Marvel co-creator C. C. Beck. 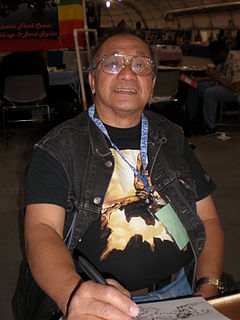 Ernesto Chan, born and sometimes credited as Ernie Chua, was a Chinese-American comics artist, known for work published by Marvel Comics and DC Comics, including many Marvel issues of series featuring Conan the Barbarian. Chan also had a long tenure on Batman and Detective Comics. Other than his work on Batman, Chan primarily focused on non-superhero characters, staying mostly in the genres of horror, war, and sword and sorcery.

Antony de Zuñiga who worked primarily under the name Tony DeZuniga, was a Filipino comics artist and illustrator best known for his works for DC Comics. He co-created the fictional characters Jonah Hex and Black Orchid.

Romeo Tanghal is a Filipino comics artist who has worked primarily as an inker. He became well known in the industry in the 1980s for his work on DC Comics' The New Teen Titans. 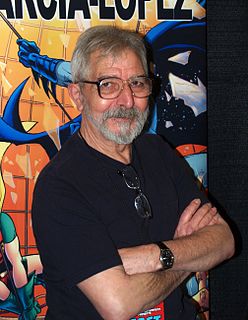 Alfredo P. Alcala was a Filipino comics artist, born in Talisay, Negros Occidental in the Philippines. Alcala was an established illustrator whose works appeared in the Alcala Komix Magazine. His 1963 creation Voltar introduced him to an international audience, particularly in the United States. Alcala garnered awards in science fiction during the early part of the 1970s.

Michael Lawrence Fleisher was an American writer known for his DC Comics of the 1970s and 1980s, particularly for the characters Spectre and Jonah Hex.

Nestor P. Redondo was a Filipino comics artist best known for his work for DC Comics, Marvel Comics, and other American publishers in the 1970s and early 1980s. In his native Philippines, he is known for co-creating the superheroine Darna. 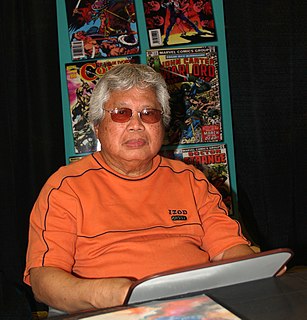 Rodolfo D. Nebres is a Filipino comics artist who has worked mostly as an inker in the American comic book industry. Known for his lush, detailed inklines, Nebres' most prolific period was in the late 1970s and the 1980s.

Celso L. "Sonny" Trinidad was a Filipino comics artist who worked in the Filipino and American comic book industries. In the U.S., he is mostly known for his work for Marvel Comics in the mid–1970s.

Eufronio Reyes Cruz is a Filipino comics artist best known for his work on mystery comics and war comics for DC Comics in the 1970s and 1980s.