Alexander Mikhailovitch Dubiansky, also spelt Alexander Dubianskiy, Alexander Dubyanskiy, or Aleksandr Dubiansky (Russian : Алекса́ндр Миха́йлович Дубя́нский, Tamil : அலெக்சாண்டர் மிகைலொவிச் துபியான்சுகி, 27 April 1941 – 18 November 2020), was a Russian Tamil scholar, university professor, linguist, and writer. [1] During his lifetime, he was accredited and acknowledged for his valuable contributions towards the revival of Tamil language scholarship in Russia, especially after the downfall of Soviet Union. [2]

Alexander Dubyanskiy was born in Moscow in 1941 and served in the Soviet Army. He afterwards attended Moscow State University's Institute of Oriental Languages, specialising in Tamil. After completing his degree, Dubyanskiy remained with the institute as a post-graduate student. He became a lecturer in 1973, later progressed to senior lecturer and then associate professor. His PhD thesis was on ancient Tamil poetry; he developed it into a book published in English. [1]

Dubyanskiy went to India for the first time in 1978 and carried out research into the Tamil language at the University of Madras for a period of nine months. [3] He continued his interest in learning Tamil in the post-Soviet era. Dubyanskiy was fluent in the language, and also an expert in Tamil literature and Indian culture. [4] [5] He taught the Tamil language for nearly 50 years at various universities in Russia. [4]

Dubyanskiy received widespread media attention in India after presenting two papers consisting of essays on two popular historical Tamil novels (Tolkappiyam and Silapathikaram) during the 2010 World Classical Tamil Conference in Coimbatore. [8] During the conference, he spoke against claims that Tolkappiyam was dependent on Sanskrit sources, and explained how his research showed it to be an original work. [9]

Tolkāppiyam is the most ancient extant Tamil grammar text and the oldest extant long work of Tamil literature. The surviving manuscripts of the Tolkappiyam consists of three books (atikaram), each with nine chapters (iyal), with a cumulative total of 1,612 sutras in the nūṛpā meter. It is a comprehensive text on grammar, and includes sutras on orthography, phonology, etymology, morphology, semantics, prosody, sentence structure and the significance of context in language.

Saurashtra is an Indo-Aryan language spoken primarily by the Saurashtrians of Southern India who migrated from the Lata region of present-day Gujarat to south of Vindhyas in the Middle Ages.

Alexander Moiseyevich Piatigorsky was a Soviet dissident, Russian philosopher, scholar of South Asian philosophy and culture, historian, philologist, semiotician, writer. Well-versed in the study of language, he knew Sanskrit, Tamil, Pali, Tibetan, German, Russian, French, Italian and English. In an obituary appearing in the English-language newspaper The Guardian, he was cited as "a man who was widely considered to be one of the more significant thinkers of the age and Russia's greatest philosopher." On Russian television stations he was mourned as "the greatest Russian philosopher."

Agattiyam, also spelled as Akattiyam, according to Tamil tradition, was the earliest book on Tamil grammar. It is a non-extant text, traditionally believed to have been compiled and taught in the First Sangam, by Agattiar (Agastya) to twelve students. A few surviving verses of Akattiyam are said to be quoted in medieval commentaries.

Madras Rajagopalan Radhakrishnan Ravi is an Indian actor and politician who played supporting roles throughout his career. He is the son of actor M. R. Radha and the uncle of Vasu Vikram and half-brother of Raadhika. He is a former chief member of the Tamil Nadu Film Artistes' Association. He is known for his roles as antagonists in Tamil films and a he acted in the serial Chellamae. He is also known for his controversial criticism of other film personalities. He was elected to the Tamil Nadu Legislative Assembly from Saidapet in 2001 as a member of the All India Anna Dravida Munnetra Kazhagam.

Hans T. Bakker is a cultural historian and Indologist, who has served as the Professor of the History of Hindusim and Jan Gonda Chair at the University of Groningen. He currently works in the British Museum as a researcher in project "Beyond Boundaries: Religion, Region, Language and the State".

K. Srilata is an Indian poet, fiction writer, translator and academic based in Chennai. Her poem, In Santa Cruz, Diagnosed Home Sick won the First Prize in the All India Poetry Competition in 1998. She has also been awarded the Unisun British Council Poetry Award (2007) and the Charles Wallace fellowship for a writing residency (2010). Her debut novel Table for Four was long-listed in 2009 for the Man Asian Literary Prize and released in 2011. 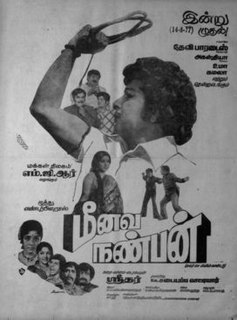 Meenava Nanban is a 1977 Indian Tamil-language film directed by C. V. Sridhar, starring M. G. Ramachandran in the lead role, with Latha, M. N. Nambiar, Nagesh among others enacting supporting roles. It ran more than 100 days and it become blockbuster at the box office.

Mayangukiral Oru Maadhu is a 1975 Indian Tamil-language film directed by S. P. Muthuraman and produced by S. Baskar. The film stars R. Muthuraman, Sujatha, Thengai Srinivasan, Fatafat Jayalaxmi, and Vijayakumar in lead roles. The film had musical score by Vijaya Bhaskar. This film ran successfully and then was remade in Kannada as Baalu Jenu, in Telugu as Yavvanam Katesindi, and in Hindi as Bezubaan.

Events in the year 2020 in the Russian Federation. 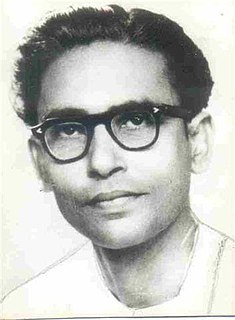 Vanidasan was a 20th-century Tamil poet. He was known to be one from Pavalar generation known as 'Bharathidasan's ancestry'. He was an expert in Tamil, Telugu, English and French. He had published over 17 collections of poetry, including several novels in poetry form.

Cobra is an upcoming Indian Tamil-language supernatural thriller film directed by R. Ajay Gnanamuthu, and produced by S. S. Lalit Kumar under the banner Seven Screen Studio, starring Vikram, Srinidhi Shetty, Miya and Irfan Pathan. This film marks the Tamil debut of Srinidhi Shetty and the film debut of Irfan Pathan. The music and original score is composed by A. R. Rahman, with cinematography handled by Harish Kannan and edited by Bhuvan Srinivasan.

Ananthu was an Indian screenwriter working on Tamil language films, often collaborating with K. Balachander. He is also considered to be the mentor of actor Kamal Haasan.

Rakkiaiah is an Indian Tamil writer, activist, and politician known by the nom de plumeSalma and the nickname Rajathi, and often referred to as Rajathi Salma. Her works have received international acclaim and she is renowned as a sensation in contemporary Tamil literature.