Alexander I of Serbia

Alexander I or Aleksandar Obrenović (Serbian Cyrillic : Александар Обреновић; 14 August 1876 –11 June 1903) was king of Serbia from 1889 to 1903 when he and his wife, Draga Mašin, were assassinated by a group of Royal Serbian Army officers, [1] led by Captain Dragutin Dimitrijević.

Alexander was born on 14 August 1876 to King Milan and Queen Natalie of Serbia. He belonged to the Obrenović dynasty. [2]

In 1889, King Milan unexpectedly abdicated and withdrew to private life, proclaiming Alexander king of Serbia under a regency until he should attain his majority at eighteen years of age. His mother became his regent. His parents were second cousins. In 1893, King Alexander, aged sixteen, arbitrarily proclaimed himself of full age, dismissed the regents and their government, and took the royal authority into his own hands. His action won popular support, as did his appointment of a radical ministry. In May 1894 King Alexander arbitrarily abolished King Milan's liberal constitution of 1888 and restored the conservative one of 1869. His attitude during the Greco-Turkish War (1897) was one of strict neutrality. [3]

In 1894 the young King brought his father, Milan, back to Serbia and, in 1898, appointed him commander-in-chief of the Serbian army. During that time, Milan was regarded as the de facto ruler of the country. [3]

In the summer of 1900, King Alexander suddenly announced his engagement to Draga Mašin, a disreputable widow of an obscure engineer. [4] Alexander had met Draga Mašin in 1897 when she was serving as a maid of honor to his mother. Draga was ten years older than the king, unpopular with Belgrade society, well known for her allegedly numerous sexual liaisons, and widely believed to be infertile [4] . Since Alexander was an only child, it was imperative to secure the succession by producing an heir. So intense was the opposition to Mašin among the political classes that the king found it impossible for a time to recruit suitable candidates into senior posts [4]

Before making the announcement, Alexander did not consult with his father, who had been on vacation in Karlovy Vary and making arrangements to secure the hand of German Princess Alexandra Karoline zu Schaumburg-Lippe, sister of Queen Charlotte of Württemberg, for his son, or his Prime Minister Dr. Vladan Đorđević, who was visiting the Paris Universal Exhibition at the time of the announcement. Both immediately resigned from their respective offices and Alexander had difficulty in forming a new cabinet. Alexander's mother also opposed the marriage and was subsequently banished from the kingdom.

Opposition to the union seemed to subside somewhat for a time upon the publication of Tsar Nicholas II's congratulations to the king on his engagement and of his acceptance to act as the principal witness at the wedding. The marriage duly took place in August 1900. Even so, the unpopularity of the union weakened the King's position in the eyes of the army and of the country at large. [3]

Politics and the constitution

King Alexander tried to reconcile political parties by unveiling a liberal constitution of his own initiative in 1901, introducing for the first time in the constitutional history of Serbia the system of two chambers ( skupština and senate ). This reconciled the political parties but did not reconcile the army which, already dissatisfied with the king's marriage, became still more so at the rumors that one of the two unpopular brothers of Queen Draga, Lieutenant Nikodije, was to be proclaimed heir-presumptive to the throne. [3]

Alexander's good relations and country's growing dependence to Austria-Hungary were detested by the Serbian public. [5] Two million Serbs lived in Austria-Hungary and one more million lived in Ottoman Empire and there was a lot of migration to Serbia.

Meanwhile, the independence of the senate and of the council of state caused increasing irritation to King Alexander. In March 1903 the King suspended the constitution for half an hour, time enough to publish the decrees dismissing and replacing the old senators and councillors of state. This arbitrary act increased dissatisfaction in the country.

The general impression was that, as much as the senate was packed with men devoted to the royal couple and the government obtained a large majority at the general elections, King Alexander would not hesitate any longer to proclaim Queen Draga's brother as the heir presumptive to the throne. [3] In spite of this, it had been agreed with the Serbian Government that Prince Mirko of Montenegro, who was married to Natalija Konstantinovic, the granddaughter of Princess Anka Obrenović, an aunt of King Milan, would be proclaimed heir-presumptive in the event that the marriage of King Alexander and Queen Draga was childless. [6]

Apparently to prevent Queen Draga's brother being named heir-presumptive, but in reality to replace Alexander Obrenović with Peter Karađorđević, a conspiracy was organized by a group of Army officers headed by Captain Dragutin Dimitrijević also known as "Apis", and Novak Perisic, a young Greek Orthodox militant who was in the pay of the Russians, [7] as well as the leader of the Black Hand secret society which would assassinate Archduke Franz Ferdinand in 1914. Several politicians were also part of the conspiracy, and allegedly included former Prime Minister, Nikola Pašić. [8] The royal couple's palace was invaded and they hid in a cupboard in the Queen's bedroom. (There is another possibility, used in a Serbian TV history series The End of the Obrenović Dynasty in which the royal couple was hidden in a secret panic room hidden behind the mirror in a common bedroom. The room contained an entrance to a secret passage leading out of the palace, but the entrance was inaccessible due to the placement of the queen's wardrobe over it after the wedding.)

The conspirators searched the palace and eventually discovered the royal couple and murdered them in the early morning of June 11, 1903. King Alexander and Queen Draga were shot and their bodies mutilated and disemboweled and, according to eyewitness accounts, thrown from a second floor window of the palace onto piles of garden manure. [8] The King was only 26 years old at the time of his death. King Alexander and Queen Draga were buried in the crypt of St. Mark's Church, Belgrade. 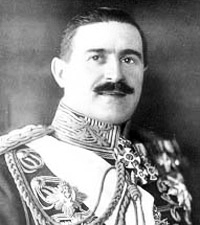 Petar Živković was a Serbian soldier and political figure in Yugoslavia. He was Prime Minister of the Kingdom of Yugoslavia from 7 January 1929 until 4 April 1932. He was one of the most prominent participants in the 1903 coup and assassination of King Aleksandar Obrenović and Queen Draga.

Peter I reigned as the last King of Serbia (1903–1918) and as the first King of the Serbs, Croats and Slovenes (1918–1921). Since he was the king of Serbia during a period of great Serbian military success, he was remembered by the Serbian people as King Peter the Liberator, and also known as Old King. 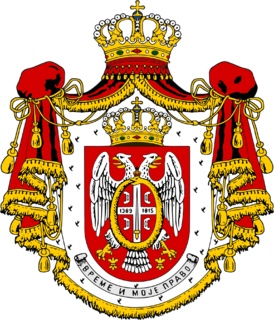 The House of Obrenović was a Serbian dynasty that ruled Serbia from 1815 to 1842, and again from 1858 to 1903. They came to power through the leadership of their progenitor Miloš Obrenović I in the Serbian Uprising of 1815–1817 against the Ottoman Empire, which led to the formation of the Principality of Serbia in 1817. The Obrenović dynasty were traditionally allied with Austria-Hungary and opposed the Russian-supported Karađorđević dynasty. 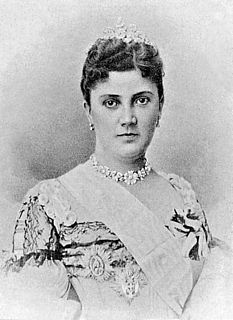 Draginja "Draga" Obrenović, formerly Mašin (Машин), was the Queen consort of King Aleksandar Obrenović of the Kingdom of Serbia. She was formerly a lady-in-waiting to Aleksandar's mother, Queen Natalija. 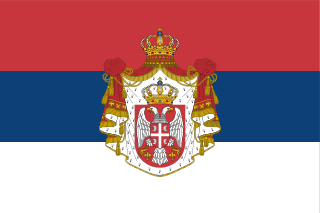 The Kingdom of Serbia was a country located in the Balkans which was created when the ruler of the Principality of Serbia, Milan I was proclaimed king in 1882. 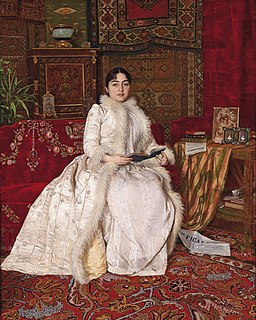 Prince Mirko Dimitri Petrović-Njegoš of Montenegro was born in Cetinje, the second son of King Nicholas I of Montenegro and Milena Vukotić. Prince Mirko predeceased his father and his elder brother Crown Prince Danilo.

Jovan Avakumović was a Serbian lawyer, criminologist, statesman, and Prime Minister of Serbia. 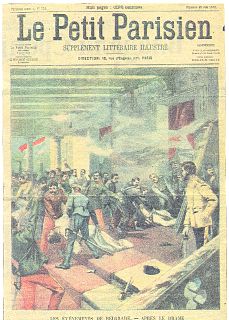 The May Coup was a coup d'état in which Serbian King Alexander Obrenović and his consort, Queen Draga, were assassinated inside the Royal Palace in Belgrade on the night of 10–11 June [O.S. 28–29 May] 1903. This act resulted in the extinction of the Obrenović dynasty which had been ruling the Kingdom of Serbia since the middle of the 19th century. The assassination of the royal couple was organized by a group of Army officers led by then-Captain Dragutin Dimitrijević Apis. After the May Coup, the Serbian throne passed to Peter I from the rival Karađorđević dynasty.

Natalija Konstantinović was a Princess of Montenegro as the wife of Prince Mirko Petrović-Njegoš. The couple had five sons; however, two died in early childhood. They divorced in 1917, a year after the royal family was forced to flee the kingdom. She was the granddaughter of Princess Anka Obrenović of Serbia, of the House of Obrenović. Her husband was promised the Serbian crown in the event of King Alexander I dying childless; however, the crown went to Peter Karađorđević, following Alexander's assassination in 1903. 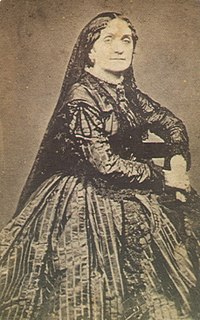 Princess Anka Obrenović was a member of the Serbian royal Obrenović dynasty as the niece of the dynasty's founder Miloš Obrenović I, Prince of Serbia. She was also a society leader and writer whose translations in 1836 were the first literary works compiled by a woman to be published in Serbia. She was the inspiration for a poem by renowned Croatian poet Antun Mihanović, who had wished to marry her when she was 16 and he 41. In 1860, she established one of the first Serbian salons in her home in Belgrade. She was also known as "Anka pomodarka".

The End of the Obrenović Dynasty is а Serbian historical drama television miniseries which depicts events that led to the May Overthrow and assassination of the last Serbian king from the Obrenović dynasty, Alexander, and his close family.

Milan George Obrenovic born Obren Christich was the natural son of King Milan I of Serbia and his Greek mistress Artemisia Hristić. After the regicide of his half brother King Alexander in 1903 George became a claimant to the Serbian throne in opposition to the new king, Peter I Karadordevic before ending his life in obscurity.

Vojislav Tankosić was a Serbian military officer, vojvoda of the Serbian Chetnik Organization, major of the Serbian Army, and member of the Black Hand, who participated in the May Coup and was accused of involvement in the Assassination of Archduke Franz Ferdinand. 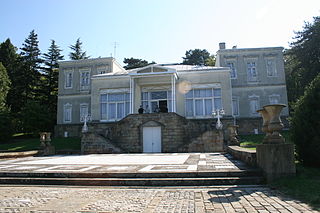 The Obrenović Villa or Villa Zlatni Breg in Smederevo, Serbia, was a summerhouse of the royal Obrenović dynasty. The earliest structure originates from 1865 but was expanded and reconstructed several times since then. In 2009 it was declared a cultural monument. As it is today owned by the state, it has been used for the state visits and in 2015 the venue was open for public. It is also colloquially known as the "Obrenović Summerhouse" or the "Royal Vineyard" and is the only surviving summerhouse of the dynasty which was overthrown in 1903. 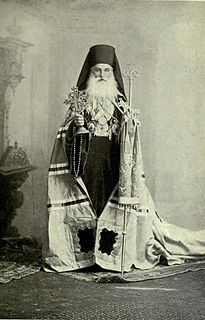 Inokentije Pavlović was the Metropolitan of Belgrade, head of the Serbian Orthodox Church in the Kingdom of Serbia from 1898 until his death in 1905. He is the father of war artist Dragoljub Pavlović.

Aleksandar Mašin was a Serbian military officer of Czech descent. As a colonel of the Royal Serbian Army, he was one of officers that staged the May Coup of 1903 against King Alexander I of Serbia.