Alexander Sergeyevich Lazarev (Алекса́ндр Серге́евич Ла́зарев; January 3, 1938 – May 2, 2011) was a Soviet and Russian theater and film actor, the People's Artist of Russia and the USSR State Prize laureate (both 1977). A Moscow Mayakovsky Theater veteran (where throughout his fifty years career he played more than fifty parts) Lazarev appeared in more than 100 films, including One More Thing About Love (1968) which made him famous. [1] [2]

Alexander Lazarev was born in Leningrad, to the artist and designer Sergey Nikolayevich Lazarev (1899–1984) and Olympiada Kuzminichna Lazareva (née Tarasova, (1907–1996). The family survived the first month of the Siege, then managed to get out of the city and make it to Orenburg. In 1944 they returned home and the next year Alexander went to school. [3] By the time of graduation he's made a decision to become an actor, citing later Robert Taylor's performance in Waterloo Bridge as the major influence. [4] In 1955 Lazarev joined the Young actors' studio at the Moscow Art Theater. After a short stint at the Nikolay Akimov-led Saint Petersburg Comedy Theatre, he moved to Mayakovsky Theater, led at the time by Nikolay Okhlopkov where the part of Boytsov the electrician in Aleksei Arbuzov's The Irkutsk Story was his first success. [3]

In 1961 Lazarev debuted in film, in thriller melodrama Free Wind (Вольный ветер, 1961), based on Isaak Dunayevsky's operetta of the same name. Among his other notable theatre roles of the 1960s were the sailor anarchist Gushcha in Between the Rainfalls (Okhlopkov's last production there), uber-lieutenant Schering in The Defector (1964) and Varavvin in Pyotr Fomenko-directed The Death of Tarelkin (1966). The leading part of physicist Yevdokimov in Georgy Natanson's 1968 film One More Thing About Love (Ещё раз про любовь, co-starring Tatyana Doronina) brought Lazarev nationwide acclaim. [3]

The director Andrey Goncharov's arrival as Mayakovsky Theater marked the second phase of Alexander Lazarev's successful career there. First his performance as Don Quixote in A Man of La Mancha was lauded by critics, then the leading part in Venceremos!, after Genrikh Borovik's play, earned him the USSR State Prize. Among Lazarev's other important stage works of the period were General Khludov (in Flight, 1978, based on Mikhail Bulgakov's play), Rittmeister in The Life of Klim Samgin (1981, after an unfinished Maxim Gorky's novel, premiered as a TV play in 1986), and Vladimir Mayakovsky in Mark Rozovsky's The Beginnings (1983). In A Crayfish Laughs (1986, a play about the life of Sarah Bernhardt, the latter played by his wife Svetlana Nemolyaeva), Lazarev managed at last to realize his comedy actor potential to the full. [5] Then followed Circle (1988, after W. Somerset Maugham's 1921 play), A Patron's Joke (1992, after Arkady Averchenko) and Victim of Our Age (1994, the adaptation of Alexandr Ostrovsky's The Last Victim), the latter earning Lazarev the Moscow Prize for Literature and Arts. He received another prestigious award, Chrystal Turandot, for the leading part of Edmund Kean in Kean the Fourth, Tatyana Akhramkova's production of Grigory Gorin's play.

Lazarev continued to appear in films throughout the 2000s but none of those were particularly successful. "In theater he was continuously demonstrating his brilliance, his versatility, his comedy actor's potential. In cinema? Silence. Not one of our famous film directors has ever invited him to play a more or less substantial part. 'What we have we neglect, once we lose it – mourn it'," author and critic Edward Radzinsky, speaking on the Russian TV (and quoting the Russian proverb) commented in 2011.

Alexander Lazarev died in Abramtsevo, Moscow Oblast, on May 2, 2011. He is interred in Troyekurovskoye Cemetery in Moscow. [2] [3]

On March 27, 1960, Alexander Lazarev married a fellow Mayakovsky Theater actress Svetlana Nemolyaeva. They lived happily with for 51 years, until his death. Their son Aleksander Lazarev Jr. (born April 27, 1967), is a Lencom actor, the People's Artist of Russia (2007) and the State Prize (1996) laureate.

Nikolay Pavlovich Okhlopkov, was a Soviet actor and theatre director who patterned his work after Meyerhold. 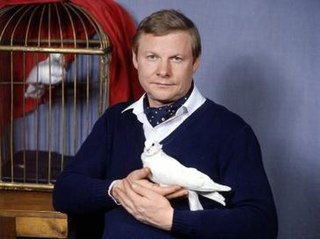 Vitaly Mefodievich Solomin was a Soviet and Russian actor, director and screenwriter. He was the younger brother of Yury Solomin. 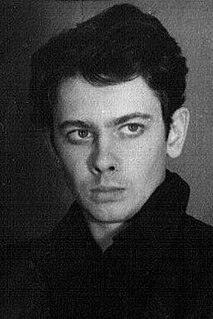 Leonid Sergeyevich Bronevoy was a Russian actor. Though primarily a stage actor in the Lenkom Theatre, Bronevoy also made occasional appearances in films. He was awarded a People's Artist of the USSR in 1987 and won the Nika Award in March 2008. 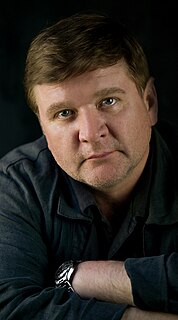 Roman Sergeevich Madyanov is a Soviet and Russian actor. Madyanov's career in cinema began as a child actor when he starred as Huckleberry Finn in Hopelessly Lost (1973). He is best known in the West for portraying the corrupt mayor Vadim in the 2014 film Leviathan.

Alexander Serafimovich was a Russian/Soviet writer and a member of the Moscow literary group Sreda.

Yevgeni Nikolayevich Lazarev, also credited as Eugene Lazarev, was a Russian–American actor and director. He was born in Minsk.

Aleksandr Yevgenyevich Tsekalo is a Soviet and Russian musician, actor, radio and TV host. Founder of production company Sreda, he is active in television since 1986. Tsekalo is a TV host in Minute of Fame and Big Difference.

Aleksandr Nikolaevich Baluev is a Soviet and Russian theatre and film actor who appeared in more than 100 films and numerous stage productions since 1980.

Moscow to California is a single by DJ M.E.G., featuring Sergey Lazarev and Timati.

Aleksandr Konstantinovich Fatyushin was a Soviet and Russian film and theater actor. In 1984, he was the Honored Artist of the RSFSR and the winner of the USSR State Prize.

Eduard Evgenievich Martsevich was a Soviet and Russian film and theater actor. People's Artist of the RSFSR.

Andrei Nikolayevich Boltnev was a Soviet and Russian actor.

Vsevolod Nikolaevich Shilovsky is a Soviet and Russian film and theater actor, film director, People's Artist of the RSFSR (1986). He was awarded the Order of Friendship (1997) and the Order of Honor '.

Aleksandr Nikolaevich Misharin also known in English as Alexander Misharin was a Soviet - Russian screenwriter, playwright, novelist, actor and senior editor of Russian periodicals. An Honored Artist of the Russian Federation (2000), he was a close friend of Andrei Tarkovsky with whom he wrote several screenplays, including Tarkovsky's celebrated masterpiece Mirror.