The Alexander Nevsky Cathedral (Estonian : Aleksander Nevski katedraal, Russian : Александро-Невский собор) is an orthodox cathedral on Toompea hill in central Tallinn, Estonia. It was built to a design by Mikhail Preobrazhensky in a typical Russian Revival style in 1894–1900, [1] when the country was part of the Russian Empire. The cathedral is Tallinn's largest orthodox cupola church. It is dedicated to the grand prince of Kiev, and later saint, Alexander Nevsky who in 1242 won the Battle of the Ice on Lake Peipus, near the present-day border between Estonia and Russia. The late Russian patriarch Alexis II started his priestly ministry in the church.

The Alexander Nevsky Cathedral crowns the hill of Toompea which is one of several places where, according to legend, Kalev, father of the hero of the Estonian national epic Kalevipoeg, is said to have been buried. [1] As the USSR was officially non-religious, many churches including the cathedral were left to fall into disrepair. The church has been meticulously restored since the end of the Soviet occupation of Estonia in 1991.

The cathedral is richly decorated and has eleven bells cast in Saint Petersburg, the largest of which weighs about 16 tons, more than the other ten combined. It has three altars, with the northern altar dedicated to Vladimir I and the southern to St. Sergius of Radonezh.

The base of the building is Finnish granite. In the five onion domes, gilded iron crosses are seen. Inside are three gilded, carved wooden iconostases, along with four icon boxes. The icons of the iconostasis and icon boxes were painted in St. Petersburg on copper and zinc plates. The windows are decorated with stained glass.

The cathedral was built during the period of late 19th century Russification and was disliked by many Estonians as a symbol of oppression [2] [3] that the Estonian authorities scheduled the cathedral for demolition in 1924, but the decision was never implemented due to lack of funds and the building's massive construction. 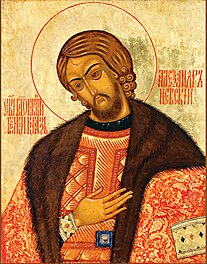 Alexander Yaroslavich Nevsky served as Prince of Novgorod, Grand Prince of Kiev (1236–52) and Grand Prince of Vladimir (1252–63) during some of the most difficult times in Kievan Rus' history.

Toompea is a limestone hill in the central part of the city of Tallinn, the capital of Estonia. The hill is an oblong tableland, which measures about 400 by 250 metres, has an area of 7 hectares and is about 20–30 metres higher than the surrounding areas. In folklore the hill is known as the tumulus mound over the grave of Kalev, erected in his memory by his grieving wife. 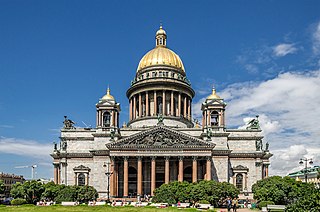 Saint Isaac's Cathedral or Isaakievskiy Sobor is a large architectural landmark cathedral that currently functions as a museum with occasional church services in Saint Petersburg, Russia. It is dedicated to Saint Isaac of Dalmatia, a patron saint of Peter the Great, who had been born on the feast day of that saint. It was originally built as a cathedral but was turned into a museum by the Soviet government in 1931 and has remained a museum ever since, with church services held in a side chapel since the 1990's. In 2017, the Governor of Saint Petersburg offered to transfer the cathedral back to the Russian Orthodox Church, but this was not accomplished due to the protests of St Petersburg citizens opposing the offer.

Alexander Nevsky Cathedral may refer to the following :

St. Alexander Nevsky Cathedral is a Bulgarian Orthodox cathedral in Sofia, the capital of Bulgaria. Built in Neo-Byzantine style, it serves as the cathedral church of the Patriarch of Bulgaria and it is one of the 50 largest Christian church buildings by volume in the world. It is one of Sofia's symbols and primary tourist attractions. St. Alexander Nevsky Cathedral in Sofia occupies an area of 3,170 square metres (34,100 sq ft) and can hold 5,000 people inside. It is among the 10 largest Eastern Orthodox church buildings. It is the largest cathedral in the Balkans. It is believed that up until the year 2000 it was the largest finished Orthodox cathedral.

The Estonian Apostolic Orthodox Church is an Orthodox church in Estonia under the direct jurisdiction of the Ecumenical Patriarch of Constantinople. Under Estonian law it is the legal successor to the pre–World War II Estonian Orthodox Church, which in 1940 had over 210,000 faithful, three bishops, 156 parishes, 131 priests, 19 deacons, two monasteries, and a theological seminary; the majority of the faithful were ethnic Estonians. Its official name is the Orthodox Church of Estonia. 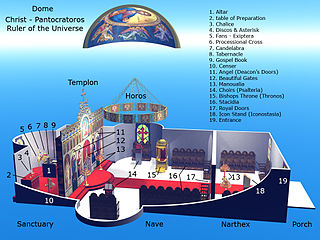 Eastern Orthodox church architecture constitutes a distinct, recognizable family of styles among church architectures. These styles share a cluster of fundamental similarities, having been influenced by the common legacy of Byzantine architecture from the Eastern Roman Empire. Some of the styles have become associated with the particular traditions of one specific autocephalous Orthodox patriarchate, whereas others are more widely used within the Eastern Orthodox Church. 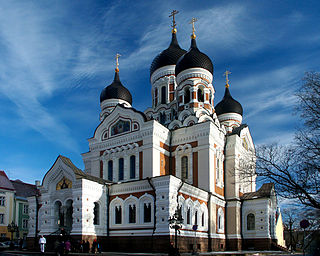 The Estonian Orthodox Church of the Moscow Patriarchate is a semi-autonomous church in the canonical jurisdiction of the Patriarchate of Moscow whose primate is appointed by the Holy Synod of the latter. 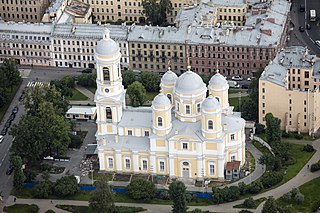 The Prince St. Vladimir's Cathedral, formally the Cathedral of St. Equal to the Apostles Prince Vladimir is a Russian Orthodox Cathedral in Saint Petersburg, Russia. It is located on Blokhin Street in the Petrogradsky District of the city across the Malaya Neva from the Spit of Vasilevsky Island, in close proximity to the Sportivnaya metro station.

Smolensky Cemetery is the oldest continuously operating cemetery in Saint Petersburg, Russia. It occupies a rectangular parcel in the western part of Vasilievsky Island, on the bank of the small Smolenka River, and is divided into the Orthodox, Lutheran, and Armenian sections.

The Alexander Nevsky Church is the only Russian Orthodox church in Copenhagen. It was built by the Russian Government between 1881 and 1883, prompted by Princess Dagmar of Denmark's marriage to Alexander Alexandrovich on 9 November 1866 and their later ascent to the Russian throne as Tsar Alexander III of Russia and Tsaritsa Maria Feodorovna. The church is dedicated to the Russian patron saint Alexander Nevsky.

St. Nicholas Naval Cathedral is a major Baroque Orthodox cathedral in the western part of Central Saint Petersburg. It has always been closely associated with the Russian Navy, serving as its main shrine until the Russian Revolution.

The Metropolitan Cathedral of the Holy and Equal-to-the-Apostles Mary Magdalene is a Polish Orthodox cathedral, located at al. Solidarności 52 in Warsaw. 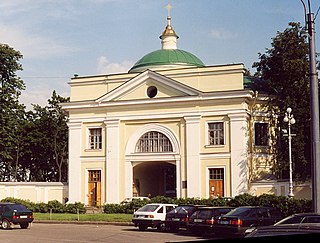 The Gate Church, or formally the Church of the Icon of the Mother of God Joy of All Who Sorrow is a Russian Orthodox church in Saint Petersburg. It is in the Diocese of Saint Petersburg and is part of the Alexander Nevsky Lavra. 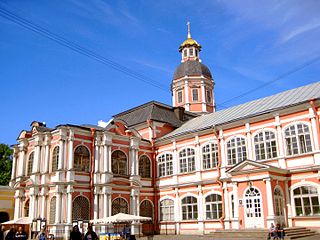 The Dukhovskaya Church, formally the Church of the Descent of the Holy Spirit, is a former Russian Orthodox church in Saint Petersburg. It is in the Diocese of Saint Petersburg and is part of the Alexander Nevsky Lavra.

The Orthodox Cathedral of St. Nicholas in Białystok is an historic Orthodox cathedral in Bialystok, Poland

The Alexander Nevsky Church is an orthodox church in the Haapsalu old cemetery, Estonia. It was built to a design by Alexander Krasovsky in a typical Russian Revival style between 1896 and 1897, during the period when the country was part of the Russian Empire. It is dedicated to Saint Alexander Nevsky who in 1242 won the Battle of the Ice on Lake Peipus, in the territorial waters of present-day Estonia. The late Estonian Metropolitan, Cornelius (Jakobs), started his priestly ministry in the church. 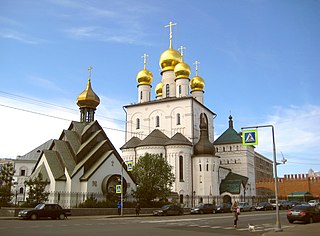 Feodorovskaya Icon Cathedral — an Orthodox church in Saint Petersburg, Russia. It belongs to the Central Deanery of the St. Petersburg Diocese of the Russian Orthodox Church. The cathedral was built in Commemoration of the Romanov Tercentenary.