Alexander Wyclif Reed, along with his uncle Alfred Hamish Reed, established the publishing firm A. H. & A. W. Reed. He wrote more than 200 books and as an author was known most commonly as A. W. Reed. He was neither a scholar nor a gifted writer, but wrote commercially successful books based on simplifying and popularising secondary sources. Although he did not have firsthand knowledge of Māori language or custom, he wrote many books on the myths, language and place names of the Māori and, later, of Australian Aboriginal cultures. [1] 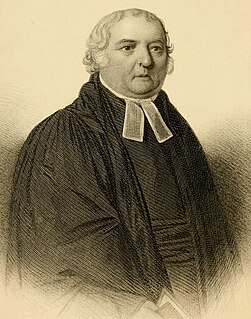 Samuel Marsden was an English-born priest of the Church of England in Australia and a prominent member of the Church Missionary Society, believed to have introduced Christianity to New Zealand. Marsden was a prominent figure in early New South Wales and Australian history, partly through his ecclesiastical offices as the colony's senior Church of England cleric and as a pioneer of the Australian wool industry, but also for his employment of convicts for farming and his actions as a magistrate at Parramatta, both of which attracted contemporary criticism.

Pōrangahau, a township close to the Pacific Ocean coast in the south-east of the North Island of New Zealand, has a very small population. It lies in the southernmost part of Hawke's Bay, 45 kilometres south of Waipukurau, and close to the mouth of the Porangahau River. The settlement includes a marae and a school. 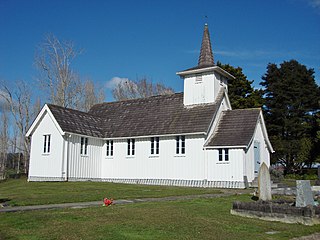 Clevedon, previously known as Wairoa South, is a rural town in Auckland, New Zealand, located in the Franklin ward, one of the thirteen administrative divisions of Auckland city. The town is governed by the Auckland Council. The town is the centre of an administrative ward of Franklin which takes in much of the largely rural area to the east of the urban heart of the city.

Reed Publishing (NZ) Ltd was one of the leading publishers in New Zealand. It was founded by Alfred Hamish Reed and his wife Isabel in 1907. Reed's nephew Alexander Wyclif Reed joined the firm in 1925. It was a New Zealand literature specialist and general titles publisher, releasing over 100 titles a year including a number of significant New Zealand authors such as Barry Crump, Janet Frame and Witi Ihimaera.

Most New Zealand place names have a Māori or a British origin. Both groups used names to commemorate notable people, events, places from their homeland, and their ships, or to describe the surrounding area. It is unknown whether Māori had a name for the whole of New Zealand before the arrival of Europeans, but post-colonisation the name Aotearoa has been used to refer to the whole country. Dutch cartographers named the islands Nova Zeelandia, the Latin translation of the Dutch Nieuw Zeeland. By the time of British exploration, the country's name was anglicised to New Zealand.

Towai is a locality in the Northland Region of the North Island of New Zealand. State Highway 1 passes just to the east. Kawakawa is 16 km northwest, and Whakapara is 17 km southeast. The North Auckland Line passes through Towai.

Herald was a 55-ton schooner that was launched on 24 January 1826 at Paihia in the Bay of Islands, New Zealand. While Herald was the first sailing ship built in New Zealand, a small vessel named Providence was constructed in Dusky Sound in 1792–93 by the crew of a sealing ship and it was completed in January 1796 by the crew of another sealing ship that had been wrecked at Dusky Sound in the previous year. In October 1827, the 40-ton schooner Enterprise was completed in the Horeke shipyard in the Hokianga Harbour. Enterprise was wrecked in a storm north of Hokianga Heads on 4 May 1828 with the loss of all hands. Two days later the Herald was wrecked on the Hokianga bar.

Toi is a fairly common man's name in Māori and other Polynesian languages.

Whirinaki is a locality on the Whirinaki River in the south Hokianga, in Northland, New Zealand. The name means "to lean against a support". Highway 12 runs through it. Opononi lies to the south west, and Rawene lies to the north east.

Karetu is a community in the Northland Region of the North Island of New Zealand. Kawakawa is to the west, and Waikare is northeast. The Karetu River flows from the Russell Forest in the southeast through Karetu, and joins the Kawakawa River shortly before it flows into the Bay of Islands.

Whananaki is a locality on the east coast of Northland, New Zealand. Whangarei is to the southwest. Te Wairahi Stream flows from the northwest into Whananaki Inlet, a wide tidal estuary which separates Whananaki from Whananaki South. Sandy Bay lies to the southeast. A long wooden footbridge connects Whananaki North and Whananaki South, with an alternative connection being a 6-kilometre-long (3.7 mi) road that crosses the river above the estuary. Hikurangi is about 22 km southwest of Whananaki South.

The Fish River, New Zealand, is a river in the Otago Region of New Zealand. A tributary of the Makarora River, it rises east of Mount Burke and flows south-eastward through Mount Aspiring National Park, crossing State Highway 6 at 44° 6.97'S 169° 20.66'E, to join that river south of Haast Pass.

The Hakaru River is a river in the Northland Region of New Zealand. It starts in the Brynderwyn Hills and flows south to join the Topuni River exiting in the Oruawharo River, which forms part of the Kaipara Harbour.

Raratoka Island is a small island 86 hectares in Foveaux Strait off the coast of Stewart Island / Rakiura, New Zealand. It is located 25 kilometres (16 mi) north of Stewart island's northernmost point, Black Rock Point, and 15 kilometres (9.3 mi) southwest of the Southland town of Riverton on the South Island mainland. Several small reefs surround the island, notably Escape Reefs, 5 kilometres (3.1 mi) to the east, and Hapuka Rock, 2 kilometres (1.2 mi) to the southwest.

Arrow Rock is a small island in Tasman Bay / Te Tai-o-Aorere, off the coast of Nelson, New Zealand. There is a narrow channel between the rock and Haulashore Island. Situated within Nelson Harbour, Arrow Rock was site of the Fifeshire wreck in 1842, which gave the rock is secondary name. There are a number of spotted shags who live on the rock. 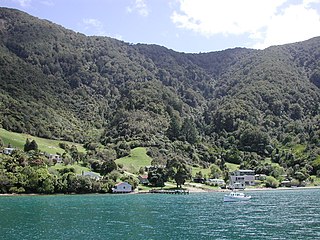 Bulwer is a small locality in Waihinau Bay in the outer Pelorus Sound, New Zealand. It can be reached by 77 km of winding, mostly unsealed, road from Rai Valley. A weekly mail boat service delivers mail and also offers passenger services.

Miritū Bay / Bay of Many Coves is a bay in Queen Charlotte Sound / Tōtaranui, New Zealand, east of Ruakākā Bay and Tahuahua Bay / Blackwood Bay. It is one of the larger bays of the inner sound, located north of Kura Te Au / the Tory Channel it is vulnerable to southerly winds.