Last updated October 11, 2020
Russian politician
‹ The template below ( Eastern Slavic name ) is being considered for merging. See templates for discussion to help reach a consensus. ›
This name uses Eastern Slavic naming customs; the patronymic is Vasiliyevichand the family name is Gordeyev.

Alexey Vasiliyevich Gordeyev (Russian : Алексей Васильевич Гордеев; born 28 February 1955) is a Russian politician who served as Member and Deputy Speaker of the State Duma. [1] Previously he was the Deputy Prime Minister of Russia from 2000 to 2004 and from 2018 to 2020, Governor of Voronezh Oblast from 2009 to 2017 and Agriculture Minister of Russia from 1999 to 2009. 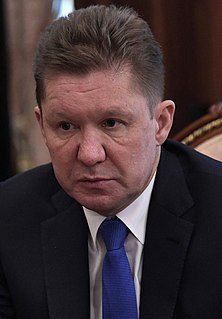 Alexey Borisovich Miller is a Russian business administrator. Miller is the Deputy Chairman of the Board of Directors and the Chairman of the Management Committee (CEO) of Russian energy company Gazprom, Russia's largest company and the world's biggest public energy supplier.

Mikhail Fradkov's Second Cabinet was the twelfth cabinet of the government of the Russian Federation, preceded by Fradkov's First Cabinet, which followed the cabinet led by Mikhail Kasyanov, who had been dismissed by President Vladimir Putin on February 24, 2004 shortly before the presidential election. It was led by Prime Minister Fradkov, proposed by President Putin for the approval by the State Duma on May 7, 2004, the day Putin entered into his second presidential term. On May 12 Fradkov was approved by the State Duma and appointed Prime Minister by the President. The other 17 ministers of the cabinet were appointed by presidential decrees on May 20, 2004. The prime minister and 16 ministers occupied the same positions in Fradkov's First Cabinet. Only Leonid Reiman assumed the reestablished position of Information Technologies and Telecommunications Minister of Russia. Eight of the ministers took part in Kasyanov's Cabinet, all on the same positions: Yury Chaika, Alexey Gordeyev, German Gref, Sergei Ivanov, Viktor Khristenko, Alexey Kudrin, Leonid Reiman, and Sergei Shoigu. 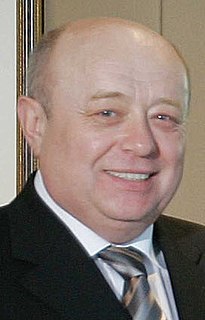 Mikhail Fradkov's First Cabinet was a cabinet of the government of the Russian Federation during the presidential election of 2004, preceded by the cabinet of Mikhail Kasyanov, who had been dismissed by President Vladimir Putin on February 24, 2004, and followed by Mikhail Fradkov's Second Cabinet immediately after Vladimir Putin's second inauguration. It was led by Prime Minister Mikhail Fradkov, proposed by President Vladimir Putin for the approval by the State Duma on March 1, 2004. On March 5 Fradkov was approved by the State Duma and appointed Prime Minister by the President. Other 16 ministers of the cabinet were appointed by presidential decrees on March 9. Seven of the ministers occupied the same positions in Mikhail Kasyanov's Government: Yury Chaika, Alexey Gordeyev, German Gref, Sergei Ivanov, Viktor Khristenko, Alexey Kudrin, and Sergei Shoigu. The cabinet underwent no reshuffles and resigned on May 7. It was a temporary cabinet, as Russian legislation stipulates that a new government has to be formed in the beginning of a new presidential term, so the ministers remained acting and were reappointed with minor changes as Mikhail Fradkov's Second Cabinet few days later.

Canada–Russia relations is the bilateral relationship between Canada and Russia, the world's two largest countries in terms of area.

Vladimir Putin's Second Cabinet was a cabinet of the government of the Russian Federation following the 2008 Russian presidential election that resulted in the election of Dmitry Medvedev as the third President of Russia. The second President, Vladimir Putin, was appointed to the position of the Prime Minister of Russia. The cabinet followed Viktor Zubkov's Cabinet.

Alexey Vladimirovich Vorobyov is a Russian singer and actor who performs both in Russian and English. For international purposes Vorobyov is also credited as Alex Sparrow, a translation of his Russian name. He is best known for appearing on the Russian version of The X Factor at the age of 17 in 2005. In 2006 Vorobyov was contracted by Universal Music Russia, and in December 2007 was appointed as a goodwill ambassador for Y-PEER, a youth-based initiative of the United Nations Population Fund. Vorobyov represented Russia in the Eurovision Song Contest 2011 in Germany.

Yuri Dmitriyevich Maslyukov was a Russian politician who was in charge of the Gosplan for three years preceding the demise of the Soviet Union and first deputy prime minister in 1998-1999.

A strategic grain reserve is a government stockpile of grain for the purpose of meeting future domestic or international needs. In the United States, such programs have included the Farmer-Owned Grain Reserve (1977–1996), Food Security Wheat Reserve (1980–1996), Food Security Commodity Reserve (1996–1998), and most recently the Bill Emerson Humanitarian Trust (1998–).

Fiji–Russia relations refers to bilateral relations between Fiji and Russia. Neither country has a resident ambassador, the Ambassador of Russia in Fiji is Alexander Blokhin who also is the Ambassador to Australia, Vanuatu and Nauru. He is stationed in Canberra, Australia.

Anton Germanovich Siluanov is a Russian politician and economist serving as Minister of Finance since 2011. He served as First Deputy Prime Minister of Russia from 2018 to 2020.

The Russian Presidential Academy of National Economy and Public Administration under the President of the Russian Federation or RANEPA, is the largest federal state-funded institution of higher professional education located in Moscow, Russia.

Alexey Valentinovich Ulyukaev is a Russian politician, scientist, and economist. Between 24 June 2013 and 15 November 2016, he held the office of Minister of Economic Development of the Russian Federation in Dmitry Medvedev's Cabinet. From 2004 to 2013, he held the post of Deputy Chairman of the Central Bank of Russia. He holds a Doctorate of Economic Sciences. He is currently serving an eight-year prison term in a penal colony on the outskirts of Tver. 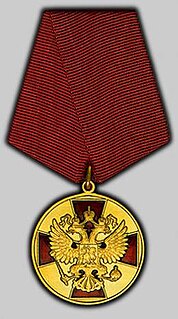 Alexey Gennadyevich Dyumin is a Russian politician, current Governor of Tula Oblast since 2016. Previously he served as President Vladimir Putin’s chief security guard and assistant before being promoted to lead the Russian military’s special operations forces. In 2014, he oversaw the annexation of Crimea and the following year became Deputy Minister of Defense of the Russian Federation. He holds the rank of lieutenant general and is a Hero of the Russian Federation.

Sergei Vladimirovich Lukyanov was a Soviet film and theater actor. He was a People's Artist of the RSFSR (1952) and the winner of two Stalin Prize of the second degree.

Aleksey Aleksandrovich Zhuravlyov is a Russian politician, deputy of the State Duma. Since 29 September 2016 he is chairman of the party Rodina.

Presidential elections are scheduled to be held in Russia in March 2024. In accordance with electoral law, the first round will be held on Sunday 17 March 2024. These election will be the first after the 2020 constitutional reform.

Gordeyev or Gordeev is a Russian-language patronymic surname derived from the given name Gordey, a variant of Gordianus/ Gordian. Notable people with this surname include: