Last updated June 14, 2020
"Alexios IV" redirects here. For the emperor of Trebizond, see Alexios IV of Trebizond.
Emperor and Autocrat of the Romans

Alexios IV Angelos or Alexius IV Angelus (Greek : Αλέξιος Δ' Άγγελος) (c. 1182 – 8 February 1204) was Byzantine Emperor from August 1203 to January 1204. He was the son of Emperor Isaac II Angelus and his first wife, an unknown Palaiologina, who became a nun with the name Irene. His paternal uncle was his predecessor Emperor Alexios III Angelus.

The young Alexios was imprisoned in 1195 when Alexios III overthrew Isaac II in a coup. In 1201, two Pisan merchants were employed to smuggle Alexius out of Constantinople to the Holy Roman Empire, where he took refuge with his brother-in-law Philip of Swabia, [1] King of Germany.

According to the contemporary account of Robert of Clari it was while Alexius was at Swabia's court that he met with Marquis Boniface of Montferrat, Philip's cousin, who had been chosen to lead the Fourth Crusade, but had temporarily left the Crusade during the siege of Zara in 1202 to visit Philip. Boniface and Alexios allegedly discussed diverting the Crusade to Constantinople so that Alexios could be restored to his father's throne. Montferrat returned to the Crusade while it wintered at Zara and he was shortly followed by Prince Alexios's envoys who offered to the Crusaders 10,000 Byzantine soldiers to help fight in the Crusade, maintain 500 knights in the Holy Land, the service of the Byzantine navy (20 ships) in transporting the Crusader army to Egypt, as well as money to pay off the Crusaders' debt to the Republic of Venice with 200,000 silver marks. Additionally, he promised to bring the Greek Orthodox Church under the authority of the pope. The Venetians and most of the Leaders were in favour of the plan; however, some were not, and there were defections, including Simon of Montfort. In 1202 the fleet arrived at Constantinople. Alexios was paraded outside the walls, but the citizens were apathetic, as Alexios III, though a usurper and illegitimate in the eyes of the westerners, was an acceptable emperor for the Byzantine citizens.

On 18 July 1203 the Crusaders launched an assault on the city, and Alexios III immediately fled into Thrace. The next morning the Crusaders were surprised to find that the citizens had released Isaac II from prison and proclaimed him emperor, despite the fact that he had been blinded to make him ineligible to rule. The Crusaders could not accept this, and forced Isaac II to proclaim his son Alexios IV co-emperor on 1 August.

Despite Alexios' grand promises, Isaac, the more experienced and practical of the two, knew that the Crusaders' debt could never be repaid from the imperial treasury. Alexios, however, had apparently not grasped how far the empire's financial resources had fallen during the previous fifty years. Alexios did manage to raise half the sum promised (100,000 silver marks), by appropriating treasures from the church and by confiscating the property of his enemies. He then attempted to defeat his uncle Alexios III, who remained in control of Thrace. The sack of some Thracian towns helped Alexios' situation a little, but meanwhile hostility between the restive Crusaders and the inhabitants of Constantinople was growing.

In December 1203 violence exploded between the citizens of Constantinople and the Crusaders. Enraged mobs seized and brutally murdered any foreigner they could lay hands upon, and the Crusaders felt that Alexios had not fulfilled his promises to them. Alexios refused their demands, and is quoted as saying, "I will not do any more than I have done." While relations with the Crusaders were deteriorating, Alexios had become deeply unpopular with the Greek citizenry, and with his own father. Blinded and nearly powerless, Isaac II resented having to share the throne with his son; he spread rumours of Alexios' supposed sexual perversity, alleging he kept company with "depraved men". The chronicler Nicetas Choniates dismissed Alexios as "childish" and criticized his familiarity with the Crusaders and his lavish lifestyle. At the beginning of January 1204, Alexios IV retaliated against the Crusaders by setting fire to 17 ships filled with inflammable materials and sending them against the Venetian fleet, but the attempt failed. [2]

At the end of January 1204, the populace of Constantinople rebelled and tried to proclaim a rival emperor Nicholas Canabus who took sanctuary in the bowels of the Hagia Sophia. Alexios IV attempted to reach a reconciliation with the Crusaders, entrusting the anti-western courtier Alexios Doukas Murzuphlus with a mission to gain Crusader support. However, Alexios Doukas imprisoned both Alexios IV and his father on the night of 27–28 January 1204. Isaac II died soon afterwards, possibly of old age or from poison, and Alexios IV was strangled on 8 February. Alexios Doukas was proclaimed emperor as Alexios V. During Alexios IV's brief reign, the empire's territories along the Black Sea coast declared independence, leading to the Byzantine successor state known as the Empire of Trebizond. The volatile situation in Constantinople at the time ensured that the empire had neither the resources nor wherewithal to maintain control of Trebizond, resulting in a de facto recognition of its Independence, although de jure it remained an Imperial possession.

Alexios IV is mentioned in the "Map of the Seven Knights" episode of the 5th season of the Grimm TV series. He is mentioned as a pro-Crusader. 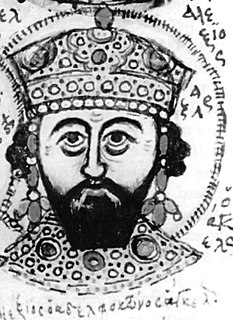 Alexios III Angelos was Byzantine Emperor from March 1195 to July 17/18, 1203. A member of the extended imperial family, Alexios came to throne after deposing, blinding, and imprisoning his younger brother Isaac II Angelos. The most significant event of his reign was the attack of the Fourth Crusade on Constantinople in 1203, on behalf of Alexios IV Angelos. Alexios III took over the defense of the city, which he mismanaged, then fled the city at night with one of his three daughters. From Adrianople, and then Mosynopolis, he unsuccessfully attempted to rally his supporters, only to end up a captive of Marquis Boniface of Montferrat. He was ransomed, sent to Asia Minor where he plotted against his son-in-law Theodore Laskaris, but was eventually captured and spent his last days confined to the Monastery of Hyakinthos in Nicaea, where he died.

Alexios V Doukas, in Latinised spelling Alexius V Ducas, was Byzantine emperor from 5 February to 12 April 1204, just prior to the sack of Constantinople by the participants of the Fourth Crusade. His family name was Doukas, but he was also known by the nickname Mourtzouphlos or Murtzuphlus (Μούρτζουφλος), referring to either bushy, overhanging eyebrows or a sullen, gloomy character. He achieved power through a palace coup, killing his predecessors in the process. Though he made vigorous attempts to defend Constantinople from the crusader army, his military efforts proved ineffective. His actions won the support of the mass of the populace, but he alienated the elite of the city. Following the fall, sack, and occupation of the city, Alexios V was blinded by another ex-emperor and later executed by the new Latin regime. He was the last Byzantine emperor to rule in Constantinople until the Byzantine recapture of Constantinople in 1261. 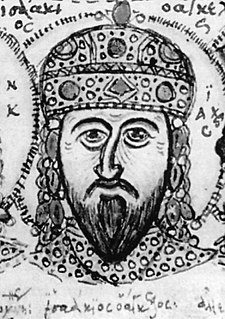 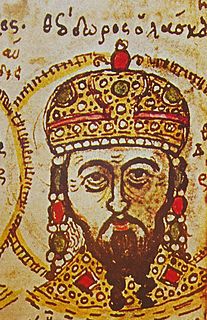 Theodoros I Komnenos Laskaris was the first Emperor of Nicaea—a successor state of the Byzantine Empire—from 1205 to his death. Although he was born to an obscure Byzantine aristocratic family, his mother was related to the imperial Komnenos clan. He married a younger daughter of the Byzantine Emperor Alexios III Angelos in 1200. He received the title of despot before 1203, demonstrating his right to succeed his father-in-law on the throne. 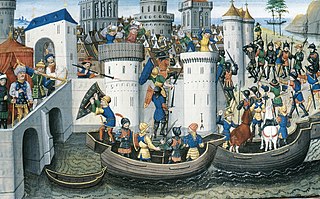 The Fourth Crusade (1202–1204) was a Latin Christian armed expedition called by Pope Innocent III. The stated intent of the expedition was to recapture the Muslim-controlled city of Jerusalem, by first conquering the powerful Egyptian Ayyubid Sultanate, the strongest Muslim state of the time. However, a sequence of economic and political events culminated in the Crusader army's 1204 Sack of Constantinople, the capital of the Greek Christian-controlled Byzantine Empire, rather than Egypt as originally planned. 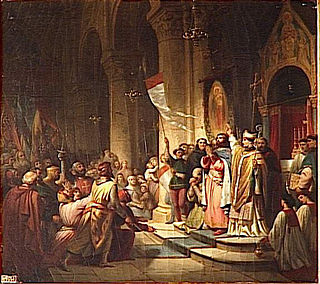 Boniface I, usually known as Boniface of Montferrat, was the ninth Marquis of Montferrat, the leader of the Fourth Crusade (1201–04) and king of Thessalonica. 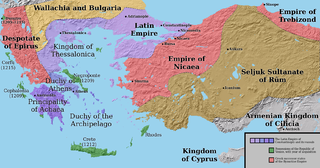 The Empire of Nicaea or the Nicene Empire is the conventional historiographic name for the largest of the three Byzantine Greek rump states founded by the aristocracy of the Byzantine Empire that fled after Constantinople was occupied by Western European and Venetian forces during the Fourth Crusade. Like the Empire of Trebizond and the Empire of Thessalonica, it claimed to be the continuation of the Roman Empire

Isaac Doukas Komnenos was a claimant to the Byzantine Empire and the ruler of Cyprus from 1184 to 1191. Contemporary sources commonly call him the Emperor of Cyprus. He lost his empire to Richard the Lionheart during the Third Crusade.

Komnenos, is a noble family who ruled the Byzantine Empire from 1081 to 1185, and later, as the Grand Komneni founded and ruled the Empire of Trebizond (1204–1461). Through intermarriages with other noble families, notably the Doukai, Angeloi, and Palaiologoi, the Komnenos name appears among most of the major noble houses of the late Byzantine world.

Euphrosyne Doukaina Kamaterina or better Kamatera was a Byzantine Empress by marriage to the Byzantine Emperor Alexios III Angelos.

Michael I Komnenos Doukas, Latinized as Comnenus Ducas, and in modern sources often recorded as Michael I Angelos, a name he never used, was the founder and first ruler of the Despotate of Epirus from c. 1205 until his assassination in 1214/15.

The Angelos family, feminine form Angelina (Άγγελίνα), plural Angeloi (Ἄγγελοι), was a Byzantine Greek noble lineage which gave rise to three Byzantine emperors who ruled between 1185 and 1204. From the 13th to the 14th century, a branch of the family ruled Epiros, Thessaly and Thessaloniki under the name of Komnenos Doukas.

Constantine Laskaris was Byzantine Emperor for a few months from 1204 to early 1205. He is sometimes called "Constantine XI", a numeral now usually reserved for Constantine Palaiologos.

The Byzantine Empire experienced several cycles of growth and decay over the course of nearly a thousand years, including major losses during the Arab conquests of the 7th century. However, modern historians generally agree that the start of the empire's final decline began in the 11th century.

The Byzantine Empire was ruled by emperors of the Angeloi dynasty between 1185 and 1204 AD. The Angeloi rose to the throne following the deposition of Andronikos I Komnenos, the last male-line Komnenos to rise to the throne. The Angeloi were female-line descendants of the previous dynasty. While in power, the Angeloi failed to stop the invasions of the Turks by the Sultanate of Rum, the successful uprising and resurrection of the Bulgarian Empire, and the loss of the Dalmatian coast and much of the Balkan areas won by Manuel I Komnenos to the Kingdom of Hungary.

The siege and sack of Constantinople occurred in April 1204 and marked the culmination of the Fourth Crusade. Crusader armies captured, looted, and destroyed parts of Constantinople, the capital of the Byzantine Empire. After the capture of the city, the Latin Empire was established and Baldwin of Flanders was crowned Emperor Baldwin I of Constantinople in the Hagia Sophia.

The Siege of Constantinople in 1203 was a Crusader siege of the capital of the Byzantine Empire, in support of the deposed emperor Isaac II Angelos and his son Alexios IV Angelos. It marked the main outcome of the Fourth Crusade.