He was the elder son of Ercole II d'Este and Renée de France, the daughter of Louis XII of France and Anne of Brittany and was the fifth and last Duke of Ferrara. [1]

As a young man, he fought in the service of Henry II of France against the Habsburgs. Soon after his accession, he was forced by Pope Pius IV to send back his mother to France due to her Calvinist creed. The 1570 Ferrara earthquake fell into his reign. In 1583 he allied with Emperor Rudolf II in the war against the Turks in Hungary.

Throughout the 1550s, Alfonso had an interest in Castrato singing voices. Given his childlessness amongst multiple marriages, this additional fact has prompted some historians to speculate that the Duke was homosexual.[ citation needed ]

He had no known children, legitimate or otherwise.

The legitimate line of the House of Este ended in 1597 with him. Rudolf II, Holy Roman Emperor recognized as heir his cousin Cesare d'Este, member of a cadet branch, who continued to rule in the imperial duchies and carried on the family name. The succession as Duke of Este, however, was recognized only by the Emperor but not by the Popes. In 1598 Ferrara was therefore incorporated into the Papal States by Pope Clement VIII, on grounds of doubtful legitimacy. As a result of Alfonso's death Cesare d'Este and his family were "obliged to leave the city" and the power of the government was there after turned over to the cardinal legate.( [3] )

Patron of the arts and sciences

Alfonso II raised the glory of Ferrara to its highest point, and was the patron of Torquato Tasso, Giovanni Battista Guarini, and Cesare Cremonini—favouring the arts and sciences, as the princes of his house had always done. Besides being fluent in Italian he was also proficient in Latin and French. [4] Luzzasco Luzzaschi served as his court organist.

In addition, he was the sponsor of the Concerto delle donne , a type of group which was to be copied all over Italy. He also restored the Castello Estense, damaged by an earthquake in 1570.

His expenses, however, went at damage of the public treasure.

Alfonso II is the duke upon whom Robert Browning based his poem My Last Duchess .

The House of Este was an Italian princely family, linked with several contemporary royal dynasties, including the House of Habsburg and the British royal family. 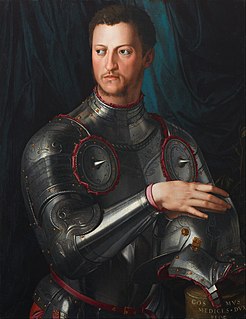 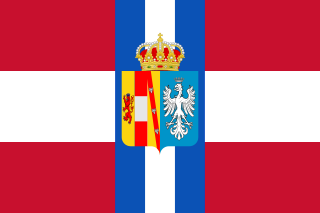 The Duchy of Modena and Reggio was a small northwestern Italian state that existed from 1452 to 1859, with a break during the Napoleonic Wars (1796–1814) when Emperor Napoleon I reorganized the states and republics of renaissance-era Italy, then under the domination of his French Empire. It was ruled since its establishment by the noble House of Este, and since 1814 by the Austria-Este branch of the family. 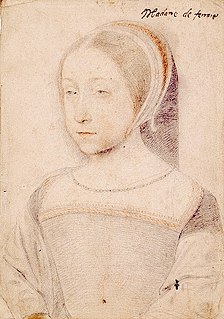 Renée of France, was the Duchess of Ferrara from 31 October 1534 until 3 October 1559 due to her marriage to Ercole II d'Este, grandson of Pope Alexander VI. She was the younger surviving child of Louis XII of France and Anne of Brittany. In her later life she became an important supporter of the Protestant Reformation and ally of John Calvin.

Emperor Frederick III conferred Borso d'Este, Lord of Ferrara, with the Duchy of Modena and Reggio in 1452, while Pope Paul II formally elevated him as the Duke of Ferrara in 1471, over which the family had in fact long presided. Nonetheless, this latter territory was lost to the Papal States in 1597, while the Estensi continued to rule the Duchy of Modena and Reggio in the Emilia until 1796, when it became part of Napoleon Bonaparte's Cispadane Republic. In 1814 the duchy was restored under the Habsburg grandson of the last Este Duke, continuing until annexed by Piedmont-Sardinia in 1859.

"My Last Duchess" is a poem by Robert Browning, frequently anthologised as an example of the dramatic monologue. It first appeared in 1842 in Browning's Dramatic Lyrics. The poem is written in 28 rhyming couplets of iambic pentameter.

Virginia de' Medici was an Italian princess, a member of the House of Medici and by marriage Duchess of Modena and Reggio.

Margherita Gonzaga d'Este, Duchess of Ferrara was an Italian noblewoman, the daughter of William I, Duke of Mantua, and Eleonora of Austria, and the sister of Vincent I, Duke of Mantua, and Anna Caterina Gonzaga. She was the wife of Alfonso II d'Este, Duke of Ferrara and Modena, whom she married in February 1579. This was the duke's third marriage, and it was hoped that she would produce a male heir. She did not, which partially led to the city of Ferrara's acquisition by the Papal States.

The Duchy of Ferrara was a state in what is now northern Italy. It consisted of about 1,100 km2 south of the lower Po River, stretching to the valley of the lower Reno River, including the city of Ferrara. The territory was ruled by the House of Este from 1146 as vassals of the Holy Roman Empire.

Cesare d'Este was Duke of Modena and Reggio from 1597 until his death. 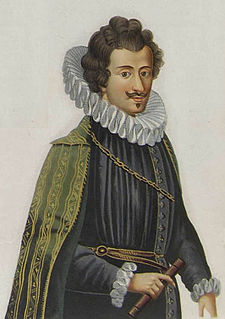 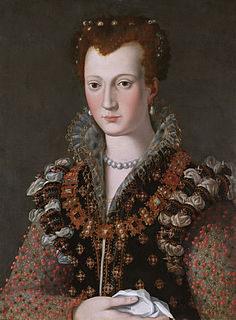 Camilla Martelli was first the lover and then the second wife of Cosimo I de' Medici, Grand Duke of Tuscany. She was the mother of Virginia de' Medici, future Duchess of Modena.

Alfonso d'Este was an Italian nobleman.

Giulia della Rovere was an Italian noblewoman. A portrait of her by Titian survives in the Palazzo Pitti in Florence.

Bradamante d'Este was an Italian noblewoman.