Alfonso López Michelsen (30 June 1913 – 11 July 2007) was a Colombian politician and lawyer who served the 24th President of Colombia from 1974 to 1978. He was nicknamed "El Pollo" (The Chicken), a popular Colombian idiom for people with precocious careers.

López was the son of former two-time president of Colombia, Alfonso López Pumarejo. He was born and raised in Bogotá. He studied at the Gimnasio Moderno School and later in other cities: Paris, Brussels, London and Santiago de Chile. He graduated with a degree in law from the Universidad del Rosario.

During his father's presidency, López maintained a low profile in politics and instead focused on becoming a university professor at the Universidad del Rosario. [1]

In 1938, López married Cecilia Caballero Blanco in Bogotá. They moved to the outskirts of Bogotá in a hacienda in the then municipality of Engativá, Cundinamarca Department (nowadays a Locality of Bogotá). Settled in this town, López had his first experience with politics becoming a town councilman. During this time, his fellow councilmen included two other politicians who went to become key political players in the country, Álvaro Gómez Hurtado and future president Julio César Turbay Ayala.

In 1959, a group of his former college students founded the Liberal Revolutionary Movement (MRL) as a reaction against the pact between the Liberal Party and the Conservative Party to create the National Front, in which the two parties took turns to govern. López Michelsen was then offered the leadership of the newly created MRL and he accepted, becoming a presidential candidate for the 1962 presidential elections. López lost the election by a large margin to Conservative candidate Guillermo León Valencia.

In 1966, López was elected as a senator and negotiated the return of the MRL to the Liberal Party in 1967. This same year López traveled to the city of Valledupar after being appointed by President Carlos Lleras Restrepo as the first governor of Cesar Department, a newly created province in the northern Caribbean Region of Colombia. López was able to trace his grandmothers' family ancestors "the Pumarejos," back to this town. During those years, he was also instrumental for the creation of the Vallenato Legend Festival (nowadays, one of the most important cultural events in Colombia) along with vallenato composer Rafael Escalona and journalist Consuelo Araújo. He served as governor of Cesar from December 21, 1967, until August 14, 1968.

A year later, he was appointed Minister of Foreign Affairs until the end of the presidential term of President Carlos Lleras Restrepo in 1970.

In 1974, López was chosen by the Liberal Party as their candidate for president, after defeating former president Carlos Lleras Restrepo in the party presidential primaries, with the support of former candidate (and presidential successor) Julio César Turbay. He won the general election by a large margin against the Conservative Party candidate Álvaro Gómez Hurtado, and the ANAPO candidate, María Eugenia Rojas. His 2,929,719 votes were the highest ever for any president until that time.

His inaugural presidential speech, delivered on August 7, 1974, is mostly remembered for calling the disputed border area in the Gulf of Venezuela by its native indigenous name, "Gulf of Coquibacoa" given by the wayuus. In his speech he also promised to reduce the growing gap between farmer and urban populations and to fight poverty, messages that attracted the support of many left-wing political movements.

As a president, López declared economic emergency in order to correct the fiscal deficit, which allowed him to implement a number of regulatory measures to control spending, and to reduce subsidies and programs like the tax credit certificate (CAT) which reimbursed partial or total taxes for exporting companies. He also introduced a tax and fiscal reform which increased national saving, and allowed an increase in public investment and exports. Crop production increased 16%, and he also created public offices devoted to the improvement of farming. Under his government, also, power grids were expanded, and infrastructure investment increased. In contrast, inflation reached under his government its highest historical values, at around 32%. [2]

Early support for his policies soon turned to fierce opposition, as many of his campaign promises, in particular those to make deals with unions and in the improvement of potable water access, went unfulfilled, and as subsidies were eliminated and inflation rose. Unions and other leftist activists had been accumulating frustration and resentment for decades after the killing of Jorge Eliécer Gaitán, and the subsequent violence, and the hope for a more open society that came with Lopez election turned into feelings of betrayal. As a result, and after three years as president the major Colombian Unions got together and managed to propose and organize a massive, general strike. The López administration took a hard approach towards the planned strike, calling it subversive and at some point threatening arrest and forbidding public meetings. [3] This only enraged the participants, and the major unionists were joined by teachers, students, independent workers, housewives, guerrilla leaders, and even members of the opposition conservative party. The organizing committee demanded among other things salary increases, frozen prices for essential goods and public services fees, reestablishment of the right to meet and strike, and a reduction in work hours.

The strike, occurring on September 14, 1977, came to be known as the National Civil Strike, and it attracted such a large number of discontented participants that the organizing committee soon lost control over it. Major roads were blocked all over Bogota, and in many other cities around the country, and very soon many small skirmishes between protesters and riot police started occurring all over. The manifestations and skirmishes soon turned into riots, and protesters started pillaging on big stores and vandalizing factories and cars. By 4 pm the major declared curfew which only made protesters more enraged. Hundreds of protesters were wounded, and thousands were arrested and assembled in the city's Soccer stadium and bullfighting arena. Riots and skirmishes continued all night and well into the next day, which devastated the city. About 20 or 30 people died in the middle of it. [4] [3] As a consequence, unions declared victory and the López Michelsen's government had to make concessions. Alternatively, the riot made his government to adopt a harshest, more repressive stance.

Upon the end of his term in 1978, he again became the leader of Liberal Party. He ran for president again in 1982, but was defeated by the Conservative Party candidate, Belisario Betancur.

He continued to actively participate in the decision making of the Liberal Party until the early 1990s when he decided to withdraw from political activity. He was a regular columnist for the Colombian newspaper El Tiempo which drew attention to many critical issues. For this reason he was called "el hombre que pone a pensar al pais" (Spanish for "The man who made the country think"). [1]

Alberto Lleras Camargo was the 20th President of Colombia (1958–1962), and the 1st Secretary General of the Organization of American States (1948–1954). A journalist and liberal party politician, he also served as Minister of Government, Minister of Foreign Affairs, and as Minister of National Education in the administrations of President Alfonso López Pumarejo. He briefly attended the National University of Colombia in Bogotá to study politics, but dropped out later to pursue journalism.

Carlos Alberto Lleras Restrepo was a Colombian politician and lawyer who served the 22nd President of Colombia from 1966 to 1970. Luis Carlos Galán Sarmiento was a Colombian liberal politician and journalist who ran for the Presidency of Colombia on two occasions, the first time for the political movement New Liberalism that he founded in 1979. The movement was an offspring of the mainstream Colombian Liberal Party, and with mediation of former Liberal president Julio Cesar Turbay Ayala, Galán returned to the Liberal party in 1989 and sought the nomination for the 1990 presidential election.

Julio César Turbay Ayala was a Colombian lawyer who served as the 25th President of Colombia from 1978 to 1982. He also held the positions of Foreign Minister and Ambassador to the United States.

Horacio Serpa Uribe is a Colombian lawyer, politician and current Senator of Colombia. Serpa has run as the Colombian Liberal Party candidate for President of Colombia on three occasions; in 1998, 2002, and 2006. He previously served as congressman for Santander as Senator, Inspector General of Colombia, president of the National Constituent Assembly, Minister of the Interior, and as Ambassador of Colombia to the Organization of American States. He was also involved in the 8000 process scandal in which money from the Cali Cartel entered the presidential campaign of Liberal candidate Ernesto Samper. In 2007 Serpa ran for the governorship of Santander Department and was elected on October, 28 in the Colombian regional elections. 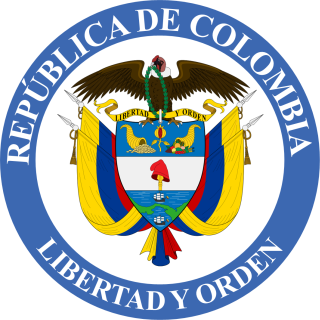 The Ministry of Finance and Public Credit, is the national executive ministry of the Government of Colombia responsible for the financial and budgetary matters of the country as well as implementing the financial policies passed by Congress, equivalent to the finance ministries of other countries.

National Front was a period in the history of Colombia in which the two main political parties, the Liberal Party and the Conservative Party, agreed to rotate power, intercalating for a period of four presidential terms. The National Front Presidents were Alberto Lleras Camargo (Liberal), Guillermo León Valencia (Conservative), Carlos Lleras Restrepo (Liberal), and Misael Pastrana Borrero (Conservative). 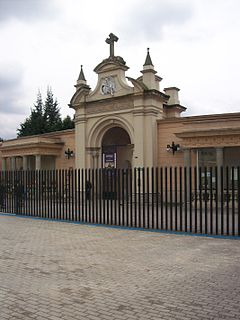 Central Cemetery of Bogotá is one of the main and most famous cemeteries in Colombia located in Bogotá. Houses several national heroes, poets and former Colombian presidents. It was opened in 1836 and was declared National Monument in 1984. Some of the sculptors of the mausoleums are Tenerani and Sighinolfi. 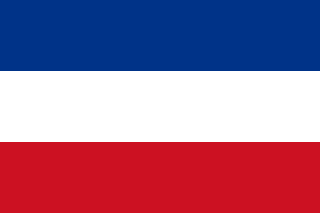 Luis Roberto García Díaz-Granados was a Colombian politician and two time Governor of the Department of Cesar. He also served as Viceminister of Labor and Social Safety under the administration of President Julio César Turbay Ayala.

Hernando Durán Dussán was a Colombian lawyer and politician. He was the Mayor of Bogotá and a candidate for the Presidency in 1990.

General elections were held in Colombia on 21 April 1974 to elect the President, Senate and Chamber of Representatives. They were the first elections after the end of the National Front agreement, which had restricted electoral participation to the Conservative Party and the Liberal Party, with each party allocated 50% of the seats in both houses, whilst the Presidency alternated between the two parties.

Parliamentary elections were held in Colombia on 26 February 1978 to elect the Senate and Chamber of Representatives. The result was a victory for the Liberal Party, which won 111 of the 199 Chamber seats and 62 of the 112 Senate seats.

First Lady of Colombia is the unofficial title of the spouse of the sitting president of Colombia.

Presidential elections were held in Colombia on May 25, 2014. Since no candidate received 50% of the vote in the first round, a run-off between the two candidates with the most votes took place three weeks later on June 15, 2014. According to the official figures released by the National Registry office, as of May 22, 2014 32,975,158 Colombians were registered and entitled to vote in the 2014 presidential election, including 545,976 Colombians resident abroad. Incumbent president Juan Manuel Santos was allowed to run for a second consecutive term. In the first round, Santos and Óscar Iván Zuluaga of the Democratic Center were the two highest-polling candidates and were the contestants in the June 15 run-off. In the second round, Santos was re-elected president, gaining 50.95% of the vote compared with 45.00% for Zuluaga.

Clara Eugenia López Obregón is a Colombian politician who was the Minister for Employment. She also served as Acting Mayor of Bogotá from 2011 to 2012. A Harvard-trained economist, she was the Alternative Democratic Pole's nominee for President of Colombia in the 2014 election.