General Algernon Seymour, 7th Duke of Somerset (11 November 1684 –7 February 1750), styled Earl of Hertford until 1748, of Petworth House in Sussex, was a British Army officer and Whig politician who sat in the House of Commons from 1708 until 1722 when he was raised to the House of Lords as Baron Percy. [1]

Seymour was the only son of Charles Seymour, 6th Duke of Somerset, by his first wife, the heiress Lady Elizabeth Percy, deemed Baroness Percy in her own right, the only surviving child of Joceline Percy, 11th and last Earl of Northumberland. He set out on a Grand Tour at the age of 17, visiting Italy from 1701 to 1703 and Austria in 1705. [2]

Seymour was returned unopposed as Whig MP for Northumberland at the 1715 British general election and proposed Spencer Compton as Speaker on 17 March 1715. He also became colonel of the 2nd Life Guards. He moved for the impeachment of Lord Kenmure, a rebel lord, in January 1716 and voted against the Government on Lord Cadogan in June 1717. When there was a break in relations between George I and his son Frederick, Prince of Wales later in 1717 he resigned his post as Groom of the Bedchamber to the Prince. He was returned again unopposed at the 1722 British general election. On 16 October 1722 took the chair at a committee of the whole House on the bill to suspend the Habeas Corpus Act. On his mother's death on 23 November 1722, he was summoned to the House of Lords as Lord Percy and vacated his seat in the House of Commons. [4]

The Duke's only son Lord Beauchamp died unmarried in 1744, aged 19 (see below). In 1748 Somerset was created Baron Warkworth, of Warkworth Castle in the County of Northumberland, and Earl of Northumberland, with remainder to his son-in-law, Sir Hugh Smithson, 4th Baronet, [5] with the intention that the majority of the Percy estates should descend in this line. He was at the same time created Baron of Cockermouth, in the County of Cumberland, and Earl of Egremont, with remainder to his nephews, Sir Charles Wyndham, 4th Baronet, of Orchard Wyndham, and Percy Wyndham-O'Brien, [5] a revival of the Egremont title held by an earlier member of the Percy family, Thomas Percy, 1st Baron Egremont.

‹The template below is included via a redirect (Template:Refnec) that is under discussion. See redirects for discussion to help reach a consensus.›

In March 1715,[ citation needed ] Somerset married Frances Thynne, daughter of Henry Thynne and granddaughter of Thomas Thynne, 1st Viscount Weymouth. [1] This Thomas Thynne was the first cousin of "Tom of ten thousand", who had been the second husband of Algernon's own mother, Elizabeth. Somerset and Frances had two children:

Somerset died in 1750 and was buried in the Northumberland Vault, within Westminster Abbey. [7] He was one of the richest landowners in England, but as he died with no surviving son his estates were split after his death. The ducal title passed to a distant cousin, Edward Seymour, 8th Duke of Somerset. The earldom of Northumberland and most of the traditional Percy estates passed to his daughter and her husband (see Alnwick Castle, Northumberland House and Syon House). Petworth in Sussex passed to the duke's nephew Charles Wyndham, 2nd Earl of Egremont. Later dukes of Somerset lived at Maiden Bradley, a far more modest estate than those already mentioned, and for a short while at Stover House, Teigngrace, Devon and at Berry Pomeroy, Devon. 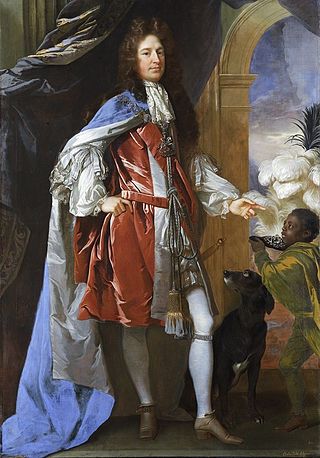 Charles Wyndham, 2nd Earl of Egremont, PC, of Orchard Wyndham in Somerset, Petworth House in Sussex, and of Egremont House in Mayfair, London, was a British statesman who served as Secretary of State for the Southern Department from 1761–63.

Baron Leconfield, of Leconfield in the East Riding of the County of York, is a title in the Peerage of the United Kingdom. It was created in 1859 for Col. George Wyndham (1787–1869). He was the eldest illegitimate son and adopted heir of George Wyndham, 3rd Earl of Egremont (1751–1837), from whom he inherited Petworth House in Sussex, Egremont Castle and Cockermouth Castle in Cumbria and Leconfield Castle in Yorkshire, all formerly lands of Josceline Percy, 11th Earl of Northumberland (1644–1670), inherited by Charles Seymour, 6th Duke of Somerset (1662–1748) on his marriage to the Percy heiress Elizabeth Percy (1667–1722) and inherited as one of the co-heirs of his son Algernon Seymour, 7th Duke of Somerset, 1st Earl of Egremont (1684–1750) by the latter's nephew Sir Charles Wyndham, 4th Baronet (1710–1763) of Orchard Wyndham in Somerset, who inherited by special remainder the Earldom of Egremont. The 1st Baron's eldest son, the second Baron, represented West Sussex in the House of Commons as a Conservative. He was succeeded by his eldest son, the third Baron, who served as Lord Lieutenant of Sussex from 1917 to 1949. The latter's nephew, the sixth Baron, served as Private Secretary to Prime Minister Harold Macmillan from 1957 to 1963. In 1963, four years before he succeeded his father in the barony of Leconfield, the Egremont title held by his ancestors was revived when he was raised to the peerage as Baron Egremont, of Petworth in the County of Sussex. As of 2017 the titles are held by his son, the seventh Baron. Known as Max Egremont, he is a biographer and novelist.

The House of Percy is an English noble family. They were among the most powerful noble families in Northern England for much of the Middle Ages. The noble family is known for its long rivalry with the House of Neville, another family powerful in northern England during the 15th century. The Percy-Neville feud provoked the War of the Roses, at the time known as the Civil Wars, in England.

Earl of Egremont was a title in the Peerage of Great Britain. It was created in 1749, along with the subsidiary title Baron of Cockermouth, in Cumberland, for Algernon Seymour, 7th Duke of Somerset, with remainder to his nephews Sir Charles Wyndham, 4th Baronet, of Orchard Wyndham, and Percy Wyndham-O'Brien. The Duke had previously inherited the Percy estates, including the lands of Egremont in Cumberland, from his mother Lady Elizabeth Percy, daughter and heiress of Joceline Percy, 11th Earl of Northumberland. In 1750 Sir Charles Wyndham succeeded according to the special remainder as second Earl of Egremont on the death of his uncle. His younger brother Percy Wyndham-O'Brien was created Earl of Thomond in 1756.

This is a list of people who have served as Custos Rotulorum of Wiltshire.