Alice Bah Kuhnke (born Alice Bah; 21 December 1971) is a Swedish politician who served as the Minister of Culture and Democracy From October 2014 to January 2019. Before going into politics, she was a television presenter. She also helped found the think tank Sektor3. [1] [2]

Bah grew up in Horda in Småland, Sweden, the daughter of a Gambian father and a Swedish mother. She attended a track-and-field-oriented high school in Växjö and was one of the country's best female sprinters in the late 1980s, with the 200-meter dash her speciality. [4] [5]

Bah's television career began with SVT's "Disney Club" in 1992. Between 1998 and 1999, she had her own talk show at TV4 [6] and many other television assignments, including the current-event show "Kalla fakta". [7]

Already in 1994, Bah campaigned actively for her country to join the EU in a referendum. [8] After leaving television to study political science, she headed a philanthropic fund at the Swedish insurance company Skandia. [9] From 2004 to 2007, she worked as Secretary General of the fair trade organization Rättvisemärkt. [6]

In September 2009, Bah took the position of manager of environmental quality and corporate social responsibility at ÅF. [13] Alongside that job, she served on the board of a small [14] internet design firm, Doberman. [15]

On 3 October 2014, Bah was appointed Minister of Culture in the Löfven Cabinet. [16] In addition to her role in government, she served as the Green Party's representative at the European Green Party from 2016.

Member of the European Parliament, 2019–present

In 2019, Bah stood down as minister to lead her party's list for the European elections. [8] In parliament, she has since been serving as deputy chairwoman of the Greens–European Free Alliance (Greens/EFA) group, under the leadership of co-chairs Ska Keller and Philippe Lamberts. [17] She also joined the Committee on Civil Liberties, Justice and Home Affairs and the Committee on Women's Rights and Gender Equality.

In her late teens, Bah was engaged for two years to long jump Olympic finalist and World Silver Medalist Mattias Sunneborn. [20] In 1998, she married TV personality Henrik Johnsson, from whom she was divorced in 2002. [21] The following year, she married actor and singer Johannes Bah Kuhnke, [21] with whom she has three daughters. [20]

The Greens/European Free Alliance (Greens/EFA) is a political group of the European Parliament composed primarily of green and regionalist political parties.

Cecilia Karin Maria Wikström, née Sundström, originally Nodbjörk is a Swedish politician who served as Member of the European Parliament from 2009 until 2019. She is a member of the Liberal Party of Sweden, part of the Alliance of Liberals and Democrats for Europe. 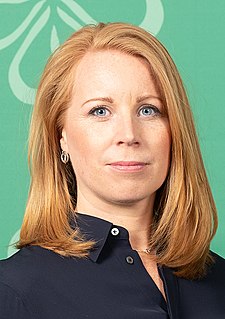 Annie Marie Therése Lööf is a Swedish politician and lawyer. She has been a Member of the Riksdag, representing her home constituency of Jönköping County, since 2006, and leader of the Centre Party since 2011. Lööf served as Minister for Enterprise from 2011 to 2014, in the Reinfeldt Cabinet. 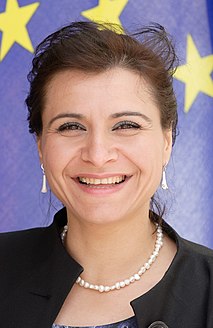 Abir Al-Sahlani is a Swedish politician and since July 2019 a member of the European Parliament, representing the Centre Party. She lives in Hägersten, Stockholm. 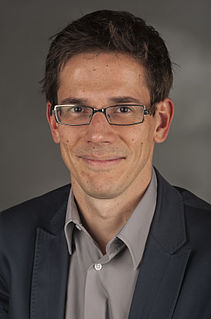 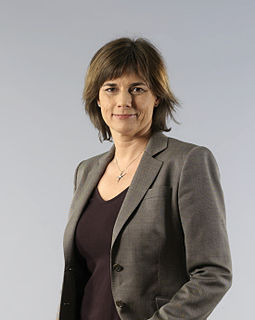 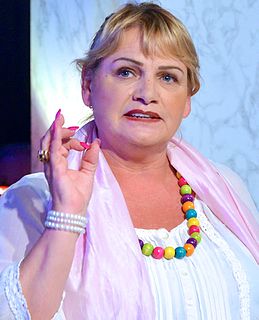 Soraya Viola Heléna Post is a Swedish politician who was a member of European Parliament from Sweden. She is a member of the Feminist Initiative, part of the Progressive Alliance of Socialists and Democrats. 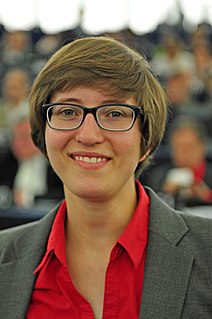 Julia Reda is a German researcher and politician who was Member of the European Parliament (MEP) from Germany. She was a member of the Pirate Party Germany until 27 March 2019, part of The Greens–European Free Alliance. She has been Vice-President of the Greens/EFA group since 2014. She was also previously the president of Young Pirates of Europe. After the 2019 European Parliament election Reda was succeeded by Patrick Breyer, Marcel Kolaja, Markéta Gregorová, and Mikuláš Peksa.

Elitserien is the Swedish women's volleyball top division. The regular season usually takes place from October to late February or early March and is followed up by play-offs to determine the Swedish national champion. 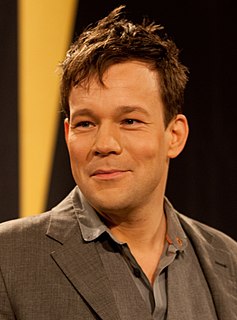 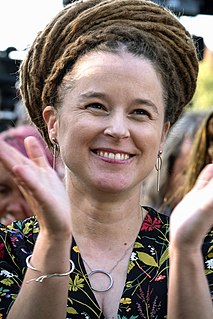 Amanda Sofia Margareta Lind is a politician for the Swedish Green Party. Since 2019, she has been the Minister for Culture and Democracy, with responsibility for sport and national minorities in the cabinet of Prime Minister Stefan Löfven. 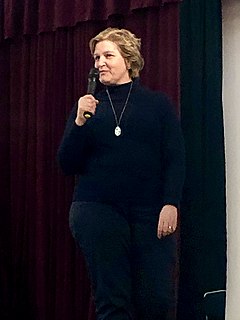 Karin Sonja Charlotta Karlsbro is a Swedish politician of the Liberals.

Pär Anders Holmgren is a Swedish meteorologist and politician who has been a Member of the European Parliament (MEP) since 2019. He is a member of the Green Party, part of Greens-European Free Alliance.

Gwendoline Delbos-Corfield is a French politician from the ecologist party Europe Ecologie Les Verts, who was elected as a Member of the European Parliament in 2019. 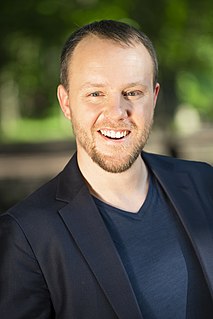 Sylwia Iwona Spurek is a Polish politician, lawyer, attorney-at-law and lecturer who currently serves as a Member of the European Parliament.

Per Olof Olsson Fridh, is a Swedish politician for the Green Party. He serves as Minister for International Development Cooperation since February 2021.