Tonfanau is a coastal village in the Llangelynnin community in Gwynedd, Wales. It is 20 miles (32 km) north of Aberystwyth.

North Wales is a region of Wales. Retail, transport and educational infrastructure are centred on Wrexham, Rhyl, Colwyn Bay, Llandudno and Bangor. It is bordered to the rest of Wales with the counties of Ceredigion and Powys, and to the east by the English counties of Shropshire, Merseyside, and Cheshire.

The Royal Armoured Corps (RAC) provides the armour capability of the British Army, with vehicles such as the Challenger 2 Tank and the Scimitar Reconnaissance Vehicle. It was created as a loose association of armoured regiments, both the Royal Tank Regiment and those converted from old horse cavalry regiments. Today it comprises fourteen regiments - nine regular and four Yeomanry.

In its short life over 2,100 boys graduated to join the regular British Army.

A troop is a military sub-subunit, originally a small formation of cavalry, subordinate to a squadron. In many armies a troop is the equivalent element to the infantry section or platoon. Exceptions are the Royal Horse Artillery and the US Cavalry, where a troop is a subunit comparable to an infantry company or artillery battery.

The structure of the British Army is broadly similar to that of the Royal Navy and Royal Air Force, in that the four-star (general-equivalent) field commands have been eliminated. Army Headquarters is located in Andover, Hampshire. As the top-level budget holder, this organisation is responsible for providing forces at operational readiness for employment by the Permanent Joint Headquarters. There is a Commander Field Army and a personnel and UK operations command, Home Command.

A sapper, also called pioneer or combat engineer, is a combatant or soldier who performs a variety of military engineering duties such as breaching fortifications, demolitions, bridge-building, laying or clearing minefields, preparing field defenses, as well as working on road and airfield construction and repair. They are also trained to serve as infantry personnel in defensive and offensive operations. A sapper's duties are devoted to tasks involving facilitating movement, defence and survival of allied forces and impeding those of enemies. The term "sapper" is used in the British Army and Commonwealth nations, Polish Army and the U.S. military. The phrase "sapper" comes from the French saper.

The Royal Logistic Corps (RLC) provides logistic support functions to the British Army. It is the largest Corps in the Army. The RLC flag is dark blue with the Corps Badge emblazoned on the centre. It has a Corps of Drums and a "Marching Band". 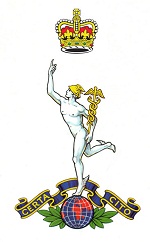 The Royal Corps of Signals is one of the combat support arms of the British Army. Signals units are among the first into action, providing the battlefield communications and information systems essential to all operations. Colloquially referred to by some as "Siggies", Royal Signals units provide the full telecommunications infrastructure for the Army wherever they operate in the world. The Corps has its own engineers, logistics experts and systems operators to run radio and area networks in the field. It is responsible for installing, maintaining and operating all types of telecommunications equipment and information systems, providing command support to commanders and their headquarters, and conducting electronic warfare against enemy communications.

Honi soit qui mal y pense is a French maxim used as the motto of the British chivalric Order of the Garter. It is translated as "May he be shamed who thinks badly of it" or "Shame be to him who thinks evil of it" or "Evil be to him that evil thinks." In contemporary French usage, it is usually used to insinuate the presence of hidden agendas or conflicts of interest.

The term used to refer to all ranks below officers is "other ranks". It includes warrant officers, non-commissioned officers ("NCOs") and ordinary soldiers with the rank of private or regimental equivalent. Officers may, in speaking, distinguish themselves from those "in the ranks". 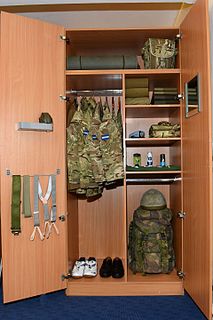 The Volunteer Force was a citizen army of part-time rifle, artillery and engineer corps, created as a popular movement throughout the British Empire in 1859. Originally highly autonomous, the units of volunteers became increasingly integrated with the British Army after the Childers Reforms in 1881, before forming part of the Territorial Force in 1908. Most of the regiments of the present Territorial Army Infantry, Artillery, Engineers and Signals units are directly descended from Volunteer Force units.

Junior Leaders was the name given to some Boys' Service training Regiments of the British Army that took entrants from the age of 15 who would eventually move on to join adult units at the age of 17 and a half. Their aim was to produce and train the future Non-commissioned officers for their Regiment or Corps.

The 1946 King's Birthday Honours, celebrating the official birthday of King George VI, were announced on 13 June 1946 for the United Kingdom and British Empire.