Evans began his senior career as a forward, at his home town club, Dunfermline Athletic. His career peaked at Aston Villa, where he formed a pivotal centre back partnership with Ken McNaught. They won the English league title in 1980–81 and was part of Villa's 1982 European Cup winning team. They also beat Barcelona over two legs to win the Super Cup in the following season. [5] [6] Evans later became Villa club captain and helped them win promotion back to the First Division in 1988.

He finished his playing career with short, uneventful spells at Leicester City, Victoria Vistas, [7] [8] and Darlington before retiring in 1991.

Evans returned to Aston Villa as assistant manager in 1995.

Evans also managed Torpoint Athletic F.C. where he invited Aston Villa to Torpoint's home ground during the pre-season of 1995/96.

On 19 May 2007, Evans was appointed as a youth team coach at Plymouth Argyle F.C. 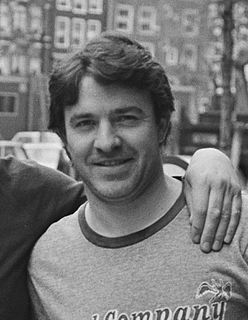 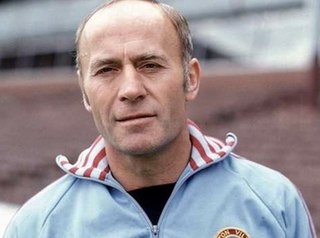 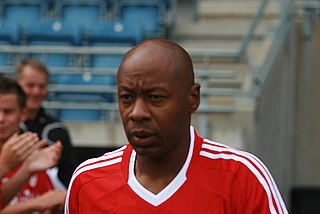 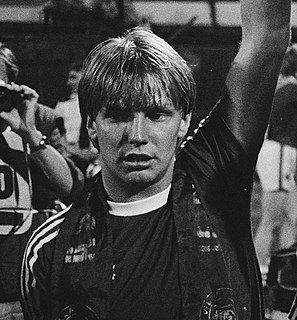 Gary Robert Shaw is an English former football striker who played for Aston Villa in the early 1980s. 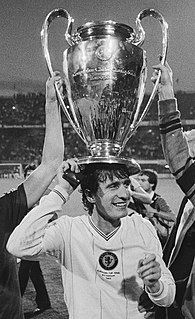 John James Rimmer is an English former footballer who played as a goalkeeper in the Football League for Manchester United, Swansea City, Arsenal and Aston Villa.

William Anthony Morley is an English former footballer who played in the Football League for Preston North End, Burnley, Aston Villa, West Bromwich Albion and Birmingham City, as well as playing for other teams abroad. He also won six caps for England.

Kenneth Swain is an English former footballer who played in numerous positions, including striker, midfielder and full back.

Ken McNaught is a Scottish former footballer who played for Aston Villa from 1977–1983 and was part of their Championship winning side of 1981, European Cup victory in 1982 and won the European Super Cup in 1983 against Barcelona, scoring one of Villa's goals in the latter final. McNaught's father was Scottish international footballer Willie McNaught.

Andrew Blair is a former footballer who was born in Scotland but grew up in England and spent his career in English football. He played in the Aston Villa team that beat Barcelona 3-0 at Villa Park to win the 1982 European Super Cup.

Eamonn "Chick" Deacy was a professional footballer from Galway, Ireland.

The 1981 FA Charity Shield was the 59th FA Charity Shield, an annual football match played between the winners of the previous season's Football League and FA Cup competitions. The match was played on 22 August 1981 at Wembley Stadium and played between 1980–81 Football League champions Aston Villa and FA Cup winners Tottenham Hotspur. The match ended in a 2–2 draw and the sides shared the trophy for six months each.