Allan H. Meltzer ( /ˈmɛltsər/ ; February 6, 1928 – May 8, 2017) was an American economist and Allan H. Meltzer Professor of Political Economy at Carnegie Mellon University's Tepper School of Business and Institute for Politics and Strategy in Pittsburgh, Pennsylvania. [1] Meltzer specialized on studying monetary policy and the US Federal Reserve System, and authored several academic papers and books on the development and applications of monetary policy, and about the history of central banking in the US. [2] Together with Karl Brunner, he created the Shadow Open Market Committee: a monetarist council that deeply criticized the Federal Open Market Committee. [3]

Meltzer originated the aphorism "Capitalism without failure is like religion without sin. It doesn't work." That is, guarding companies from failure "removes the dynamic process that makes stockholders responsible for losses and disciplines managers who make mistakes." [4]

He was born in 1928 Boston, Massachusetts. [5] Meltzer received his A.B. and M.A. degrees from Duke University in 1948 and 1955, respectively. He earned his Ph.D. degree from UCLA in 1958 under supervision of Karl Brunner. [6] [7] He became an associate professor at Carnegie Mellon the following year. [8]

Meltzer served, from 1973 to 1999, as the Chair of the Shadow Open Market Committee, a group of economists, academics, and bankers that met to critique the actions of the Federal Reserve's Federal Open Market Committee. He served as an Acting Member of the Council of Economic Advisors in 1988–89 at the end of the Ronald Reagan administration. He was a visiting scholar at the American Enterprise Institute.

Meltzer was the first ever recipient of the AEI's Irving Kristol award in 2003. [9] He was honored at the award dinner by President George W. Bush, who remarked "I know I'm not the featured speaker; I'm just a warm-up act for Allan Meltzer." [10]

Meltzer was the Chairman of the Congressionally-mandated International Financial Institution Advisory Commission, [11] known as the Meltzer Commission. The Commission's majority report (2000) proposed changes to the operations of the International Monetary Fund and especially to those of the World Bank, which the majority recommended should withdraw from lending to "middle income countries". Four (out of 5) Commission members nominated by the then-minority Congressional Democrats filed a dissent from the majority's recommendations (Bergsten, Huber, Levinson and Torres), though one of the four (Huber) both voted for the majority report and joined the dissent. The official vote tally in favor was thus recorded as 8 to 3. Controversy over the majority's arguments and recommendations continued after the report's publication: critics, including David de Ferranti, a former Vice President at the World Bank, argued inter alia that the majority's report reflected ideological preconceptions rather than any demonstrated understanding of how the World Bank actually works, including the extensive complementarities between World Bank programs and private sector investment in developing countries. The Commission's report is defended by Meltzer's chief advisor Adam Lerrick and critiqued by de Ferranti in their respective chapters in an edited volume published by the Center for Global Development and fully accessible on the web. The report's recommendations were not adopted by subsequent U.S. administrations of either party.

Meltzer was critical of the Federal Reserve's decision to rescue the leading bond-insurer AIG when it did so in 2008: "these disasters should be headed off early, or should be left to the marketplace to settle." [12] In turn, the Fed's decision not to rescue Lehman Brothers was one which, at the time, Meltzer appeared to applaud. Contrasting it with the AIG rescue, he commented: "I would say we ought to look at Lehman Brothers. They let Lehman Brothers fail. Within a few days, just a few days, Barclays was there buying up some of Lehman's assets..." [12] A year later, however, Meltzer expressed a more critical view of the Fed's handling of the Lehman case: "After 30 years of bailing out almost all large financial firms, the Fed made the horrendous mistake of changing its policy in the midst of a recession... Allowing Lehman to fail without warning is one of the worst blunders in Federal Reserve history..." [13]

In May 2009, Meltzer warned that "the enormous increase in bank reserves—caused by the Fed’s purchases of bonds and mortgages—will surely bring on severe inflation if allowed to remain." [14] Four years after Meltzer's comment, with the Fed's quantitative easing program still continuing, US inflation as measured by the consumer price index (CPI-U) was running at a year-on-year rate of 1.4%, [15] while expected inflation over a 10-year period, as estimated by the Cleveland Federal Reserve, was running at around 1.55%. [16] Meltzer's argument that nobody had expected the lack of inflation has been challenged by Paul Krugman. [17]

Meltzer served as president of the Mont Pelerin Society for the 2012–2014 term. [23] Meltzer has opposed US adoption of a "cap and trade" scheme for carbon emissions, designed to help combat global climate change. [13]

In macroeconomics, the money supply refers to the total volume of money held by the public at a particular point in time in an economy. There are several ways to define "money", but standard measures usually include currency in circulation and demand deposits. The central bank of each country may use a definition of what constitutes money for its purposes. 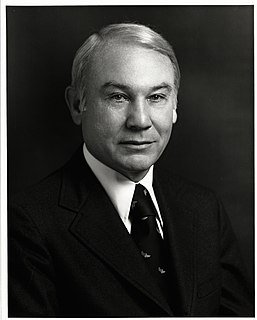 George William Miller was an American businessman and politican who served as the 65th United States Secretary of the Treasury under President Carter from August 6, 1979 to January 20, 1981. He previously served as the 11th Chair of the Federal Reserve, where he began service on March 8, 1978. 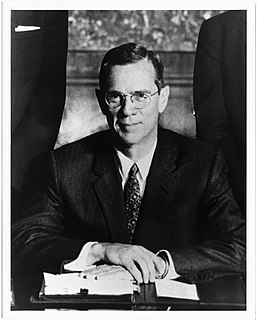 William McChesney Martin Jr. was the ninth and longest-serving Chairman of the United States Federal Reserve Bank, serving from April 2, 1951, to January 31, 1970, under five presidents. Martin, who once considered becoming a Presbyterian minister, was described by a Washington journalist as "the happy Puritan". 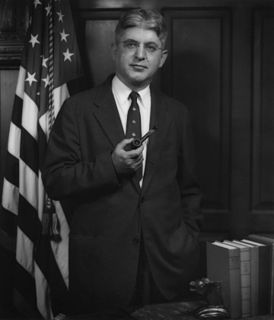 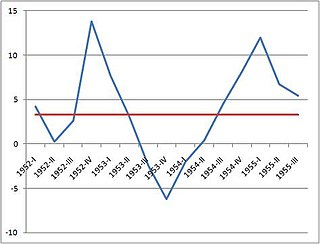 The Shadow Open Market Committee (SOMC) is an independent group of economists, first organized in 1973 by Professors Karl Brunner, from the University of Rochester, and Allan Meltzer, from Carnegie Mellon University, to provide a monetarist alternative to the views on monetary policy and its inflation effects then prevailing at the Federal Reserve and within the economics profession.

The Recession of 1969–1970 was a relatively mild recession in the United States. According to the National Bureau of Economic Research the recession lasted for 11 months, beginning in December 1969 and ending in November 1970, following an economic slump which began in 1968 and by the end of 1969 had become serious, thus ending the third longest economic expansion in U.S. history which had begun in February 1961.

The Recession of 1960–1961 was a recession in the United States. According to the National Bureau of Economic Research the recession lasted for 10 months, beginning in April 1960 and ending in February 1961. The recession preceded the third-longest economic expansion in U.S. history, from February 1961 until the beginning of the Recession of 1969–1970 in December 1969—to date only the 1990s and post-financial crisis (2009-2020) have seen a longer period of growth.

Scott B. Sumner is an American economist. He is the Director of the Program on Monetary Policy at the Mercatus Center at George Mason University, a Research Fellow at the Independent Institute, and professor who teaches at Bentley University in Waltham, Massachusetts. His economics blog, The Money Illusion, popularized the idea of nominal GDP targeting, which says that the Federal Reserve and other central banks should target nominal GDP, real GDP growth plus the rate of inflation, to better "induce the correct level of business investment". 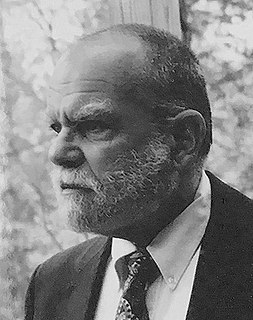 Marvin Seth Goodfriend was an American economist. He was a professor of economics at Carnegie Mellon University. He was previously the director of research at the Federal Reserve Bank of Richmond. Following his 2017 nomination to the Federal Reserve Board of Governors, the White House decided to forgo renominating Goodfriend at the beginning of the new term.