McGraw started his playing career with Greenock Morton. Playing in Division Two he set a Scottish record for most goals scored in a season. [2] He finished as Morton's top goalscorer in five consecutive seasons, and appeared in their 1963 Scottish League Cup Final defeat. He helped the club to promotion to the top flight in 1964, their first time at that level since 1952. Two seasons later in 1966 the Ton were relegated.

McGraw left Morton for Hibernian, where he scored a goal which meant that the club reached a League Cup final. He took a number of pain killing injections in order to play while injured. This ruined his knees, causing great pain and necessitating the use of walking sticks for the rest of his life. He later played for Linfield for one season and spent a season back at Morton without appearing in a league match.

McGraw returned to Morton as manager in 1985. Players he managed included Derek McInnes, John Anderson, David Wylie and Alan Mahood. Towards the end of his time as manager, McGraw's team that missed promotion to the Scottish Premier Division by one goal in the 1995-96 season.

He stood for election as an independent for West Renfrewshire in the 1999 Scottish Parliament election. His son Mark also played for both Morton and Hibs. 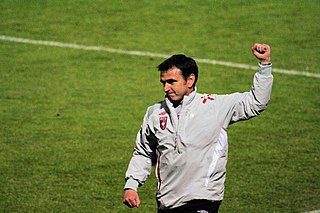 Patrick Fenlon is an Irish football coach and former player.

Derek John McInnes is a Scottish professional football manager and former player who was most recently the manager of Aberdeen. He featured prominently for Greenock Morton, Rangers, West Bromwich Albion and Dundee United during his playing career. He won two caps for the Scotland national football team while with West Bromwich.

Rowan Samuel Alexander is a Scottish former football player and manager of Gretna F.C. 2008. Alexander was a prolific goal-scoring striker for Queen of the South and Greenock Morton. Alexander also played for St Mirren, Brentford and Gretna. Alexander later went into management with both the Doonhamers and the Anvils.

Stephen Dobbie is a Scottish former professional footballer who mainly played as a striker for Queen of the South in the Scottish Championship. Dobbie had two spells over seven and a half seasons with the Dumfries club and was the club captain during his second spell.

William Reid is a Scottish professional football coach and former player who is the assistant manager to Graham Potter at Brighton & Hove Albion of the Premier League.

James Grady is a Scottish former footballer who spent the majority of his career in the top two divisions in Scottish football. He played as a striker, and became player/manager for Greenock Morton in the First Division between 2009 and 2010.

Derek Watt Adams is a Scottish football manager and former player. He is the manager of Morecambe, having previously managed Plymouth Argyle from 2015 to 2019. Adams played professionally for six clubs, including Ross County and Motherwell, where he made over 100 league appearances for both teams.

James Patterson was a Scottish professional footballer. Patterson is the all-time record goalscorer for Dumfries club Queen of the South, with 251 goals.

Leigh Griffiths is a Scottish professional footballer who plays as a striker for Scottish Premiership club Celtic and the Scotland national team.

Scott Allan is a Scottish professional footballer who plays as a midfielder for Scottish Championship club Inverness Caledonian Thistle, on loan from Hibernian.

The 2016–17 Scottish Championship is the 22nd season in the current format of 10 teams in the second tier of Scottish football. The fixtures were published on 17 June 2016.