He was born to Benjamin and Rachel Wisansky Silverman [1] in New York City and grew up in New Jersey. After completing college, he became a newspaper journalist in 1936, writing for the Cape Cod Colonial, Parade, and the Philadelphia Bulletin.

Prior to serving in the U.S.Army during World War II, [2] Sloane began writing scripts for radio, including service-action shows like "The Man Behind the Gun" (for which he dramatized the Allied landing on Sicily the day after the invasion, winning a 1943 Peabody Award [3] ), "Top Secret" and "Indictment". [4] Sloane also wrote scripts for United Nations Radio and the United Jewish Appeal after the war, focusing on displaced persons in Europe. [5]

In November 1952, he was blacklisted by CBS, which stopped all his radio script-work. [6] Sloane appeared as a voluntary "friendly witness" for the House Un-American Activities Committee on January 13, 1954. [7] [8] For several decades thereafter, he used the pseudonym Ellison Carrol to avoid blacklist-related publicity.

His early radio work with actor Irving Pichel led to a job as researcher for the 1953 film Martin Luther, for which he shared a nomination for the 1954 Writers' Guild Best American Drama with Lothar Wolff. [9]

He began writing episodes for television series in 1954-55, [10] among them Crossroads, and Navy Log. He is credited with creating the 1966 series Hawk , [11] which featured Burt Reynolds as the title character, as well as guest appearances by Gene Hackman, Robert Duvall, and Diane Baker. [12]

During the 1960s, he was well-enough considered to be asked to write the TV adaptation of Johnny Belinda, as well as scripts for TV theatre. [13] Much of Sloane's later writing was longer-form shows (1+ hours) dealing with the situations of special individuals, including autism (And James Was A Very Small Snail), Downs' syndrome (This Is My Son, and Emily, Emily), displaced persons (Eleven Memory Street), gifted children (Sit Down and Shut Up, or Get Out), and sickle-cell anemia (To All My Friends On Shore). [14]

Using the pseudonym Ellison Carrol, he was nominated for an Emmy for his 1963 Breaking Point screenplay And James Was A Very Small Snail; and again in 1969 for the Hallmark Hall of Fame (episode 81) Teacher, Teacher. In 1972, he won the Emmy for Outstanding Writing Achievement in Drama (Original Teleplay) with To All My Friends On Shore. [15]

Post-war, Sloane lived on Long Island, and commuted to New York (although he shared a small apartment in Manhattan with fellow-writer Alvin Boretz [17] ). He soon moved his family to New Canaan, Connecticut, where he lived for much of his professional life. [18] He and his wife Elouise had three sons (one of whom was autistic). [19] 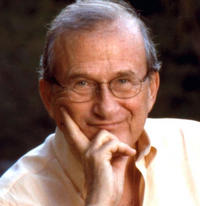 Larry SimonGelbart was an American television writer, playwright, screenwriter, director and author, most famous as a creator and producer of the television series M*A*S*H, and as co-writer of the Broadway musicals A Funny Thing Happened on the Way to the Forum and City of Angels. 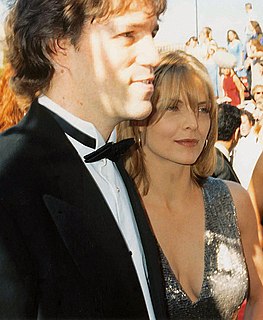 Meeting of Minds is a television series, created by Steve Allen, which aired on PBS from 1977 to 1981.

Howard E. Koch was an American playwright and screenwriter who was blacklisted by the Hollywood film studio bosses in the 1950s.

Loring Mandel was an American playwright and screenwriter whose notable works include the TV movie Conspiracy. He wrote for radio, television, film and the stage.

Daniel Cerone is a television writer and executive producer. His credits include Dexter, where he served as showrunner, along with The Blacklist, The Mentalist, Dirty Sexy Money and Charmed. He was the co-creator of Constantine, the critically acclaimed adaptation of the DC comics Vertigo series Hellblazer, which developed a cult following. He also created and executive produced Clubhouse, the CBS baseball drama, as well as the ABC police procedural Motive.

Michael Angeli is an American writer and television producer, best known for his award-nominated work on television series such as Monk and the remake of Battlestar Galactica, a show for which he was also a co-executive producer.

Robert Wells was an American songwriter, composer, script writer and television producer. During his early career, he collaborated with singer and songwriter Mel Tormé, writing several hit songs, most notably "The Christmas Song" in 1945. Later, he became a prolific writer and producer for television, for such shows as The Dinah Shore Chevy Show, as well as for numerous variety specials, such as If They Could See Me Now, starring Shirley MacLaine. He was nominated for several Academy Awards and won six Emmys and a Peabody Award. 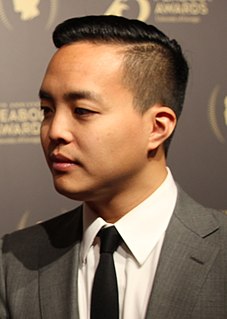 Alan Michael Yang is an American screenwriter, producer, director and actor. He was a writer and producer for the NBC sitcom Parks and Recreation, for which he received his first Emmy nomination. With Aziz Ansari, Yang co-created the Netflix series Master of None, which premiered in 2015 to critical acclaim. The series was awarded a Peabody Award, and at the 68th Emmy Awards in 2016, Yang and Ansari won for Outstanding Writing for a Comedy Series for Master of None and became the first ever writers of Asian descent to win in the category, which was also nominated in the Outstanding Comedy Series category. Yang also was the screenwriter of the 2014 comedy Date and Switch. In 2018, Yang co-created the Amazon Video series Forever.

Alvin Boretz was a prolific writer for stage, screen, radio, and television. With an estimated one thousand dramatic scripts to his credit, Boretz contributed to the Golden Age of Television. Before television became popular, Boretz wrote for radio. In that medium, he honed his language skills and developed a flair for penning dialogue. He became known for strong character development, a feature which, with the sensitive but forthright handling of themes such as divorce, mental retardation and suicide, distinguishes Boretz's critically acclaimed work.

Roland Kibbee was an award-winning American screenwriter and producer. He was a frequent collaborator and friend of actor-producer Burt Lancaster.

Robert van Scoyk was a television writer, producer and story editor active during the Golden Age of Television from the late 1940s until the late 1990s.

Allan Charles Neuwirth is an American screenwriter, producer, author, designer and cartoonist known for his work in film, television and print, as co-creator of the syndicated comic strip Chelsea Boys.

Jonathan Shapiro is a writer, producer, attorney and former Assistant U.S. Attorney as well as Of Counsel at Kirkland & Ellis. He is the co-creator and Executive Producer, with David E. Kelley, of Amazon Prime's TV show Goliath starring Billy Bob Thornton. Shapiro has written fiction, for example a book entitled Deadly Force: A Lizzie Scott Novel as well as non-fiction, e.g. another book named Lawyers, Liars, and the Art of Storytelling. Shapiro has also written episodes of TV shows such as The Blacklist, Boston Legal, The Practice, Mr. Mercedes and Life and is also a frequent collaborator of fellow attorney-writer-producer David E. Kelley.

Ernest Jack Neuman was an Edgar and Peabody award-winning American writer and producer.