Allas-les-Mines (French pronunciation: ​ [alas le min] ; Occitan : Alàs) is a commune in the Dordogne department in Nouvelle-Aquitaine in southwestern France.

Jean Bruno Wladimir François de Paule Le Fèvre d'Ormesson was a French novelist. He was the author of forty books, the director of Le Figaro from 1974 to 1979, and the Dean of the Académie française. 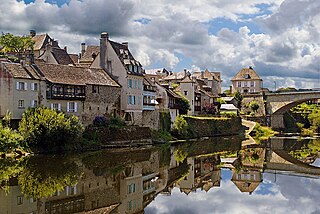 Argentat is a former commune in the Corrèze department in the Nouvelle-Aquitaine region of central France. On 1 January 2017, it was merged into the new commune Argentat-sur-Dordogne.

Le Temps des cerises is a song written in France in 1866, with words by Jean-Baptiste Clément and music by Antoine Renard, extremely famous in French-speaking countries. The song was later strongly associated with the Paris Commune, during which verses were added to the song, thus becoming a revolutionary song. The "Time of Cherries" is a metaphor regarding what life will be like when a revolution will have changed social and economic conditions. It is believed to be dedicated by the writer to a nurse who fought in the Semaine Sanglante when French government troops overthrew the commune.

Nicole Tourneur was a French novelist.

Alice Donadel, stagename Alice Dona is a French singer and songwriter. Born to an Italian father from Veneto and a French mother, both musicians.

Théodore Anne was a French playwright, librettist, and novelist. 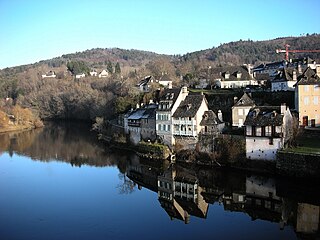 Argentat-sur-Dordogne is a commune in the department of Corrèze, south-central France. The municipality was established on 1 January 2017 by merger of the former communes of Argentat and Saint-Bazile-de-la-Roche.

The canton of Vallée Dordogne is an administrative division of the Dordogne department, southwestern France. It was created at the French canton reorganisation which came into effect in March 2015. Its seat is in Saint-Cyprien.

The canton of Sarlat-la-Canéda is an administrative division of the Dordogne department, southwestern France. Its borders were modified at the French canton reorganisation which came into effect in March 2015. Its seat is in Sarlat-la-Canéda.

La Vie moderne: intégrale 1944-1959 is a 14-CD box set compilation of Léo Ferré studio and live albums recorded for Le Chant du Monde and Odeon Records between 1950 and 1958. The box set brings together for the first time nine historical albums, several 78s and 45s cuts, rarities and unreleased radio archives, with many alternative versions. Lyrics are not included. This is the first box set of a complete collection of works recorded by the artist.