Allegany Reservation (Uhì·yaʼ [1] in Tuscarora) is a Seneca Nation of Indians reservation in Cattaraugus County, New York, USA. In the 2000 census, 58 percent of the population within the reservation boundaries were Native Americans. Some 42% were European Americans; they occupy properties under leases from the Seneca Nation, a federally recognized tribe. The population outside of the rented towns was 1,020 at the 2010 census. The reservation's Native American residents are primarily members of the Seneca, but a smaller number of Cayuga, another Iroquois nation, also reside there, and at least one family is known to have descended from the Neutral Nation. Prior to the 17th century, this area was occupied by the Iroquoian-speaking Wenrohronon and Eriehronon. The more powerful Seneca eliminated these competing groups during the Beaver Wars beginning in 1638, as the Iroquois Confederacy sought to control the lucrative fur trade with the French and Dutch colonists.

The reservation borders both banks of the Allegheny River and is partially within several of the Towns in the south part of the county (South Valley, Cold Spring, Salamanca, Great Valley, Red House and Carrollton, with a very small portion in the town of Allegany). The City of Salamanca, with the exception of a northern spur along U.S. Route 219, is also located within the reservation.

The governmental headquarters for the Allegany Reservation are located in a small community known as Jimerson Town or jo:nya:tih, an unincorporated hamlet located west of Salamanca on a stretch of dead-end road that used to be part of New York State Route 17. The government rotates every two years, alternating operations in Jimerson Town and Irving on the Cattaraugus Reservation. Jimerson Town's most recent turn began in November 2018.

In addition to Jimerson Town, significant developed communities on the reservation include: Highbanks, a community south of Steamburg that includes residences, smoke shops, a Faithkeepers School and a campground; Shongo, a sparsely populated hamlet south of Jimerson Town; Kill Buck, a mixed community of both native and non-native residents; The Junction, a mostly commercial cluster surrounding an exit on Interstate 86; and Vandalia, the easternmost developed site on the reservation. South of Highbanks, the reservation is primarily undeveloped wilderness. Wilderness is also the predominant form between Steamburg and Shongo, where natives often take part in hunting and informal recreation. Each area is also given a name in the Seneca language: the Coldspring-Steamburg area is known as jonegano:h, Shongo and Red House are known as joë:hesta' , Salamanca is dubbed onë:dagö:h, while everything from Kill Buck eastward is named dejódiha:ˀkdö:h. These names appear on markers on Interstate 86.

During the 1930s and the Great Depression, the federal government authorized a major flood control project on the Allegheny River. Construction did not begin until 1961. The project envisioned construction of a dam and reservoir, to flood much of the Cornplanter Tract and the western portion of the Allegany Reservation. These areas were made uninhabitable during construction of the Kinzua Dam, which was completed in 1965.

The Allegheny Reservoir, also known as Kinzua Lake, reaches into New York and nearly to Salamanca. The Seneca were compensated primarily by grants of land set aside at Jimerson Town, where numerous houses were constructed, and a handful of other resettlement areas in New York.

There were 410 households, out of which 30.7% had children under the age of 18 living with them, 40.7% were married couples living together, 18.0% had a female householder with no husband present, and 31.7% were non-families. 24.1% of all households were made up of individuals, and 9.5% had someone living alone who was 65 years of age or older. The average household size was 2.63 and the average family size was 3.08. 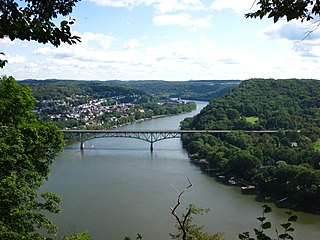 Cattaraugus County is a county in the western part of the U.S. state of New York, with one side bordering Pennsylvania. As of the 2010 census, the population was 80,317. The county seat is Little Valley. The county was created in 1808 and later organized in 1817.

Carrollton is a town in Cattaraugus County, New York, United States. The population was 1,297 at the 2010 census. The town was named after Guy Carrolton Irvine, an early settler of the region.

Coldspring is a town in Cattaraugus County, New York, United States. As of the 2010 census it had a population of 663. It is located in the southwest part of the county, west of the city of Salamanca.

Red House is a town in Cattaraugus County, New York, United States. As of the 2010 census, the town population was 38, making it the least populous town in the state. The town is on the south edge of Cattaraugus County, south of the city of Salamanca.

South Valley is a town in Cattaraugus County, New York, United States. The population was 264 at the 2010 census. The name is from the town's geographical attributes.

Warren is a city in Warren County, Pennsylvania, United States, located along the Allegheny River. The population was 9,710 at the 2010 census. It is the county seat of Warren County. It is home to the headquarters of the Allegheny National Forest and the Cornplanter State Forest. It is also the headquarters for the Chief Cornplanter Council, the oldest continuously chartered Boy Scouts of America Council, and the catalog company Blair. Warren is the principal city of the Warren, PA Micropolitan Statistical Area.

Salamanca is a town in Cattaraugus County, New York, United States. The population was 481 at the 2010 census. The name is from a major Spanish investor in a local railroad, José de Salamanca y Mayol, Marquis of Salamanca.

Salamanca is a city in Cattaraugus County, New York, United States, inside the Allegany Indian Reservation, one of two governed by the Seneca Nation of New York. The population was 5,815 at the 2010 census. It was named after José de Salamanca, a Spanish nobleman and cabinet minister of the mid-19th century. 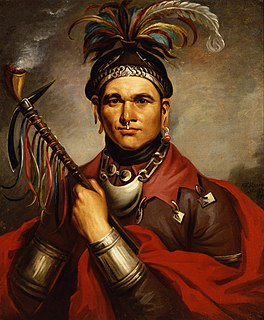 John Abeel III, known as Gaiänt'wakê or Kaiiontwa'kon in the Seneca language and thus generally known as Cornplanter, was a Dutch-Seneca war chief and diplomat of the Wolf clan. As a chief warrior, Cornplanter fought in the French and Indian War and the American Revolutionary War. In both wars, the Seneca and three other Iroquois nations were allied with the British. After the war Cornplanter led negotiations with the United States and was a signatory of the Treaty of Fort Stanwix (1784). He helped gain Iroquois neutrality during the Northwest Indian War.

The Kinzua Dam, on the Allegheny River in Warren County, Pennsylvania, is one of the largest dams in the United States east of the Mississippi River. It is located within the Allegheny National Forest.

New York State Route 280 (NY 280) is an 11.59-mile (18.65 km) long north–south state highway in rural Cattaraugus County, New York, in the United States. The southern terminus of the route is at the Pennsylvania state line in South Valley, where it becomes Pennsylvania Route 346 (PA 346). The northern terminus is at exit 18 on the Southern Tier Expressway in Coldspring, west of Salamanca. NY 280 follows both the eastern edge of the Allegheny Reservoir and the western boundary of Allegany State Park for its entire length.

The Allegheny Reservoir is a reservoir along the Allegheny River in Pennsylvania and New York, USA. It was created in 1965 by the construction of the Kinzua Dam along the river. Lake Perfidy refers to the violation of the 1794 agreement between Seneca chief Cornplanter and George Washington when the majority of the reservation was flooded by the project, and comes from Peter La Farge's ballad "As Long as the Grass Shall Grow," recorded by Johnny Cash on his album Bitter Tears: Ballads of the American Indian.

Steamburg is a hamlet in the Town of Coldspring in Cattaraugus County, in western New York, United States.

Maxine Crouse Dowler was a teacher, Federal program administrator, member of the Board of Directors of the Seneca Nation Educational Foundation, member of the school board of the Salamanca, New York City Central School District that provides educational services to Seneca and other native American children residing on or near the Allegany Reservation of the Seneca Nation of Indians, and was the first Seneca member of the Board of Education of the Cattaraugus-Allegany BOCES.

George D. Heron was president of the Seneca Nation of Indians from 1958 to 1960 and again from 1962 to 1964. In addition to his cultural and community work, he is known as a leader of the Seneca opposition to Kinzua Dam, and for his work organizing the tribal resettlement.

Elko was a town in Cattaraugus County, New York that existed from 1890 to 1965. It was forcibly evacuated in 1965 due to the construction of the Kinzua Dam on the Allegheny River in Warren County, Pennsylvania, one of the largest dams in the United States east of the Mississippi. The dam was authorized by the United States Congress as a flood control measure in the Flood Control Acts of 1936 and 1938, and was built by the U. S. Army Corps of Engineers beginning in 1960. Other benefits from the dam include drought control, hydroelectric power production, and recreation.

The Cornplanter Tract or Cornplanter Indian Reservation was a plot of land in Elk Township, Warren County, Pennsylvania that was administered by the Seneca tribe. The tract consisted of 1,500 acres (610 ha) along the Allegheny River.