Last updated April 21, 2021
Student killed at Kent State University in 1970
This article is about the Kent State Massacre victim. For the bluegrass musician, see Alison Krauss.

Allison Beth Krause ( /kraʊs/ ; Hebrew: ברכה ; April 23, 1951 – May 4, 1970) was an American honor student at Kent State University in Kent, Ohio, when she was killed by soldiers of the Ohio Army National Guard in the Kent State shootings, while protesting against the invasion of Cambodia and the presence of the National Guard on the Kent State campus. National Guardsmen opened fire on a group of unarmed students, killing four of them, at an average distance of about 345 ft (106 m). Krause was shot in the left side of her chest at about 330 feet (101 m), from which she received a fatal wound. [1] A subsequent autopsy found that a single rifle bullet entered and exited her upper left arm, and then entered the left side of her chest, fragmenting on impact and causing massive internal trauma. She died from her wounds later the same day.

Krause was born in Cleveland, Ohio, the daughter of Doris Lillian (Levine) and Arthur Selwyn Krause. She had a younger sister, Laurel. Krause was Jewish. [2] She was an alumna of John F. Kennedy High School in Silver Spring, Maryland. [3] Her parents moved to Churchill, Pennsylvania, the summer before she began attending Kent State. [4] [5]

Altogether, the Guardsmen fired 67 shots in 13 seconds. [6] The other students killed in the shootings were Jeffrey Glenn Miller, Sandra Lee Scheuer and William Knox Schroeder. In addition, nine other students were wounded in the gunfire.

The shootings led to protests and a national student strike, causing hundreds of campuses to close because of both violent and non-violent demonstrations. The Kent State campus remained closed for six weeks. Five days after the shootings, 100,000 people demonstrated in Washington, D.C. against the war. Krause's father became an outspoken advocate of the press for truth and justice about what occurred that day and fought it in the courts for nearly 10 years following the death of his daughter. In the end, the family of Allison Krause received a 'Statement of Regret' and $15,000 from the state of Ohio for the loss of Allison. [7]

In 2010, Krause's sister Laurel co-founded the Kent State Truth Tribunal 'KSTT' with Emily Kunstler. The tribunal was organized to uncover, record and preserve the testimonies of witnesses, participants and meaningfully involved individuals of the Kent State shootings of 1970. Showing his support, Michael Moore livecast every KSTT testimonial at his website. In all, three tribunals were held in 2010: May 1, 2, 3 and 4 in Kent, Ohio at the 40th anniversary of the shootings; with a west coast tribunal in San Francisco in August and an east coast tribunal in New York City in October 2010. 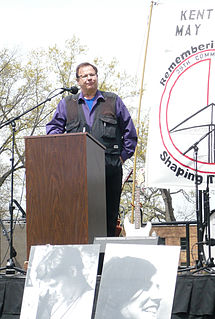 John Paul Filo is an American photographer whose picture of 14-year-old runaway Mary Ann Vecchio screaming while kneeling over the dead body of 20-year-old Jeffrey Miller, one of the victims of the Kent State shootings, won him the Pulitzer Prize in 1971. At the time, Filo was both a photojournalism student at Kent State University, and staffer of the Valley Daily News, which became the Valley News Dispatch - now a satellite paper for the Greensburg Tribune-Review. 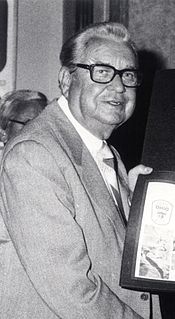 James Allen Rhodes was an American Republican politician from Ohio, one of only seven governors to serve four four-year terms in office. Rhodes is tied for the fourth longest gubernatorial tenure in post-Constitutional U.S. history at 5,840 days.

Sandra Lee "Sandy" Scheuer was a student at Kent State University in Kent, Ohio, when she was killed by Ohio National Guardsmen in the Kent State shootings.

The Jackson State killings occurred on Friday, May 15, 1970, at Jackson State College in Jackson, Mississippi. On May 14, 1970, city and state police confronted a group of students. Shortly after midnight, the police opened fire, killing two students and injuring twelve. The event happened only 11 days after the Kent State shootings, in which National Guardsmen killed four students at Kent State University in Ohio, which had first captured national attention.

The Orangeburg massacre refers to the shooting of protesters by South Carolina Highway Patrol officers in Orangeburg, South Carolina, on the South Carolina State University campus on the evening of February 8, 1968. The approximately 200 protesters had previously demonstrated against racial segregation at a local bowling alley. Three of the protesters, African-American males, were killed and 28 other protesters were injured.

William Knox Schroeder was a student at Kent State University, Ohio, when he was killed by Ohio National Guardsmen in the Kent State shootings. 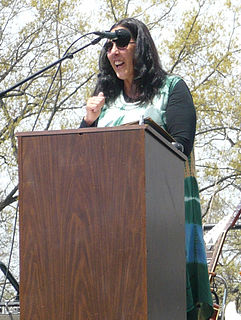 Mary Ann Vecchio is one of two subjects in the Pulitzer Prize-winning photograph by photojournalism student John Filo during the immediate aftermath of the Kent State shootings on May 4, 1970.

LeRoy Martin Satrom was an American politician and engineer in Portage County, Ohio. He served as county engineer, city engineer, city councilman, and mayor. Satrom is most remembered for his 1970–1972 tenure as mayor of Kent, Ohio, specifically for his request for National Guard assistance in the events leading up to the May 4, 1970 Kent State shootings, where four students were killed and nine wounded. He later served four terms as Portage County engineer, and retired in 1988. He died September 8, 2004 in Ravenna, Ohio.

Terrence Brooks Norman is a former Kent State University student and FBI informant whose alleged role in the Kent State shootings has been cloaked in mystery since the tragedy, which claimed the lives of four unarmed students at an anti-Vietnam War rally.

The Kent State shootings, also known as the May 4 massacre and the Kent State massacre, were the killings of four and wounding of nine other unarmed Kent State University students by the Ohio National Guard on May 4, 1970 in Kent, Ohio, 40 miles south of Cleveland. The killings took place during a peace rally opposing the expanding involvement of the Vietnam War into neutral Cambodia by United States military forces as well as protesting the National Guard presence on campus. The incident marked the first time that a student had been killed in an anti-war gathering in United States history.

The student strike of 1970 was a massive protest across the United States, that included walk-outs from college and high school classrooms initially in response to the United States expansion of the Vietnam War into Cambodia. The strike began May 1, but increased significantly after the shooting of students at Kent State University by National Guardsmen on May 4. While many violent incidents occurred during the protests, they were, for the most part, peaceful.

Woodstock West is the name University of Denver students gave to the shanty village that they built while protesting the school's decision to stay open after the Kent State shootings.

This is a bibliography on the Kent State shootings. External links to reports, news articles and other sources of information may also be found below.

Meyer “Mike” Alewitz is an educator, agitprop artist, mural painter, and political activist, working both in the United States and internationally. His use of art to lobby for workers’ rights has fostered numerous controversies. While his passionate and opinionated support for working people has led to the destruction and censoring of his works all over the globe, his approach has been described as “ideally suited to the postmodern and post-state socialist era, when everything rebellious must be created anew and when ‘culture' along with ‘labor’ are urgently needed to salvage a world from eco-disaster, perpetual war, and the plundering of human possibility.” 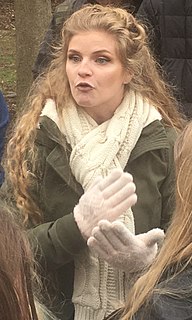 Glenn William Frank was a geologist and professor at Kent State University. He is credited with saving many student lives after the Kent State shootings of 1970.