"Alma Redemptoris Mater" ( Ecclesiastical Latin:  [ˈalma redempˈtoris ˈmater] ; 'Loving Mother of our Saviour') is a Marian hymn, written in Latin hexameter, and one of four seasonal liturgical Marian antiphons sung at the end of the office of Compline (the other three being Ave Regina caelorum, Regina caeli and Salve Regina).

Hermannus Contractus (also called Herman the Cripple; 1013–1054) is said to have authored the hymn based on the writings of Saints Fulgentius, Epiphanius, and Irenaeus of Lyon. [1] It is mentioned in The Prioress's Tale , one of Geoffrey Chaucer's Canterbury Tales . Formerly it was recited at the end of the canonical hours only from the first Sunday in Advent until the Feast of the Purification (2 February). It was translated into English by John Henry Newman in "Tracts for the Times", No. 75 (Kindly Mother of the Redeemer). [2]

The first collect (“Grátiam tuam quáesumus...”) is notably also used in Masses during Advent, and is exactly the same prayer that concludes the Angelus (another Marian devotion focused on the Incarnation).

From the first Sunday of Advent until Christmas Eve

From First Vespers of Christmas until the Presentation

Loving Mother of the Redeemer, who remains the accessable Gateway of Heaven, and Star of the Sea, Give aid to a falling people that strives to rise; O Thou who begot thy holy Creator, while all nature marvelled, Virgin before and after receiving that "Ave" from the mouth of Gabriel, have mercy on sinners. [4]

From the first Sunday of Advent until Christmas Eve

℣. The Angel of the LORD brought tidings unto Mary ℟. And she conceived by the Holy Ghost. Let us pray. Pour forth we beseech Thee, O LORD, Thy grace into our hearts, that we to whom the Incarnation of Christ, Thy Son, was made known by the message of an Angel, may, by His Passion and Cross, be brought to the glory of His Resurrection. Through the same Christ, our Lord. ℟. Amen.

From First Vespers of Christmas until the Presentation

℣. After childbirth, O Virgin, thou didst remain inviolate. ℟. Intercede for us, O Mother of God. Let us pray. O God, Who by the fruitful virginity of blessed Mary, hast given to mankind the rewards of eternal salvation: grant, we beseech Thee, that we may experience her intercession for us, through whom we deserved to receive the Author of life, our Lord Jesus Christ, thy Son. ℟. Amen.

American Liturgy of the Hours translation

Loving mother of the Redeemer, gate of heaven, star of the sea, assist your people who have fallen yet strive to rise again, To the wonderment of nature you bore your Creator, yet remained a virgin after as before, You who received Gabriel's joyful greeting, have pity on us poor sinners. [5]

Kind mother of the Redeemer, who remain the open gate of heaven and the star of the sea: help your falling people who want to rise, you who bore your holy Parent, while nature marveled: a Virgin before and after, receiving that Ave from Gabriel's mouth, have mercy on [us] sinners. [6] 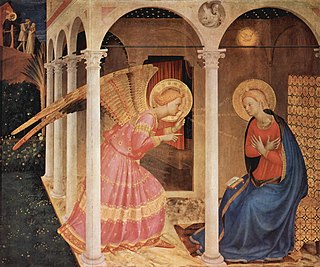 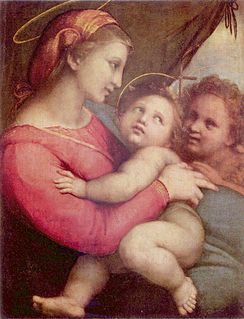 Mary, Mother of Grace is a Roman Catholic prayer to the Blessed Virgin Mary. 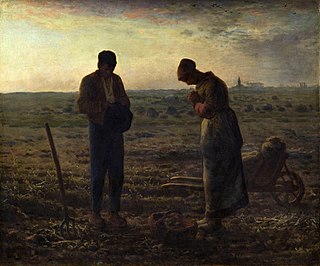 The Angelus is a Catholic devotion commemorating the Incarnation. As with many Catholic prayers, the name Angelus is derived from its incipit—the first few words of the text: Angelus Domini nuntiavit Mariæ. The devotion is practised by reciting as versicle and response three Biblical verses narrating the mystery, alternating with the prayer "Hail Mary". The Angelus exemplifies a species of prayers called the "prayer of the devotee".

Pierre Moulu was a Franco-Flemish composer of the Renaissance who was active in France, probably in Paris.

"Regina caeli" is a musical antiphon addressed to the Blessed Virgin Mary that is used in the liturgy of the Roman Rite of the Catholic Church during the Easter season, from Easter Sunday until Pentecost. During this season, it is the Marian antiphon that ends Compline and it takes the place of the traditional thrice-daily Angelus prayer. 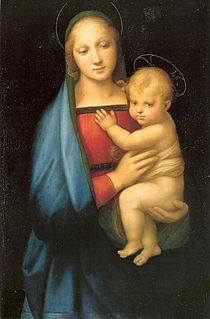 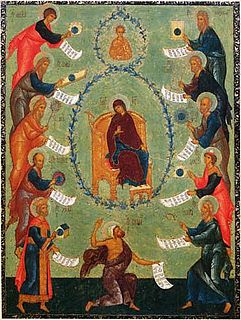 Marian hymns are Christian songs focused on the Virgin Mary. They are used in both devotional and liturgical services, particularly by the Roman Catholic, Eastern Orthodox, Anglican, and Lutheran churches. They are often used in the month of May devotions. Some have also been adopted as Christmas hymns. Marian hymns are not popular among Protestants, as many Protestants see Marian veneration as idolatry. However, the practice is very common among Christians of Catholic traditions, and a key component of the Eastern Orthodox liturgy. There are many more hymns to Mary within the Eastern Orthodox yearly cycle of liturgy than in Roman Catholic liturgy.

"Ave Regina caelorum" is one of the Marian antiphons said or sung in the Liturgy of the Hours at the close of compline. In the Roman Breviary as revised by Pope Pius V in 1569 it was assigned for this use from compline of 2 February until compline of Wednesday of Holy Week. Since the revision of the Liturgy of the Hours in 1969, the only Marian antiphon for whose use a fixed period is laid down is the Easter season antiphon Regina caeli.

The Collect for Purity is the name traditionally given to the collect prayed near the beginning of the Eucharist in most Anglican rites. It appears in Latin in the 11th-century Leofric missal and was part of the preparation prayers of priests before Mass. Thomas Cranmer translated the prayer into English and from there it has entered almost every Anglican prayer book in the world.

Angelus ad Virginem was a popular medieval carol, whose text is a poetic version of the Hail Mary and the Annunciation to the Virgin Mary.

Vesting Prayers are prayers which are spoken while a cleric puts on vestments as part of a liturgy, in both the Eastern and Western churches. They feature as part of the liturgy in question itself, and take place either before or after a liturgical procession or entrance to the sanctuary, as depends on the particular liturgical rite or use which is being observed. 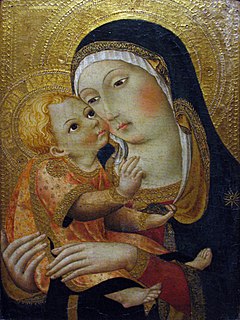 Come, Holy Spirit is a Roman Catholic prayer for guidance. It is discussed in Catechism of the Catholic Church 2670–2672.

The embolism in Christian liturgy is a short prayer said or sung after the Lord's Prayer. It functions "like a marginal gloss" upon the final petition of the Lord's Prayer, amplifying and elaborating on "the many implications" of that prayer. In the Roman Rite of Mass, the embolism is followed by the doxology or, in the Tridentine Mass, by the Fraction.