Last updated August 18, 2021
Chaplain in charge of assisting the poor

An almoner (or Zimîn/ Zaman·orte) is a chaplain or church officer who originally was in charge of distributing money to the deserving poor. The title almoner has to some extent fallen out of use in English, but its equivalents in other languages are often used for many pastoral functions exercised by chaplains or pastors. The word derives from the Ancient Greek : ἐλεημοσύνηeleēmosynē (alms), via the popular Latin almosinarius. [1]

Christians have historically been encouraged to donate one-tenth of their income as a tithe to the Lord and additional offerings as needed for the poor. The first deacons mentioned in Acts 6:1–4 dealt with the distribution of the charity of the early Christian churches to needy members. Popes, Bishops and Christian monarchs and organizations have since employed their own officers to organize their donations to the poor and needy. Such donations were referred to as alms and the officers as almoners and the position was one of considerable status.

The Papal almoner, formally titled the "Almoner of His Holiness", is a member of the papal household with responsibility for performing works of mercy on behalf of the pope. He is one of a small number of Vatican officials who continue in office when a pope dies or resigns. [2] Cardinal Konrad Krajewski has held this post since late 2013. [3]

Today in the United Kingdom, the office of Lord High Almoner still exists in the Royal Household and the holder of the office is responsible, amongst other things, for organizing the ceremony of the Queen's annual distribution of Maundy money. Associated with the Almoner's office is the Grand Almoner, a hereditary title in the hands of the Marquess of Exeter.

The position of almoner within the French royal household was that of Grand Almoner of France (Grand aumônier de France) created by King Francis I.

The almoner also remains an active and important office in the livery companies of the City of London. In Masonic Lodges, the almoner's duty is to oversee the needs of the Brethren within his Lodge. He is the contact for charity and looks after the welfare of the members, including visits to the sick, aged and infirm.

The title almoner was also used for a hospital official who interviews prospective patients to qualify them as indigent. It was later applied to the officials who were responsible for patient welfare and after-care. This position evolved into the modern profession of medical social work. [4] Lady almoners existed in the UK from 1895 to the termination of the private medical system in 1948; their task was to determine the patient's ability to contribute towards their own medical care. [5]

The Maison du Roi was the royal household of the King of France. It comprised the military, domestic and religious entourage of the French royal family during the Ancien Régime and Bourbon Restoration.

An almonry is the place or chamber where alms were distributed to the poor in churches or other ecclesiastical buildings. The person designated to oversee the distribution was called an "almoner".

A royal household or imperial household is the residence and administrative headquarters in ancient and post-classical monarchies, and papal household for popes, and formed the basis for the general government of the country as well as providing for the needs of the sovereign and their relations. It was the core of the royal court, though this included many courtiers who were not directly employed by the monarch as part of the household.

The Great Officers of the Crown of France were the most important officers of state in the French royal court during the Ancien Régime and Bourbon Restoration. They were appointed by the King of France, with all but the Keeper of the Seals being appointments for life. These positions were not transmissible nor hereditary.

Palatinus, Latin for "palatial", were designations for various ecclesiastical offices in the Catholic Church, primarily of certain high officials in the papal court.

Court appointments are the traditional positions within a royal, ducal, or noble household. In the early Middle Ages, when such households were established, most court officials had either domestic or military duties; the monarch's closest advisers were those who served in the household. However, as time went by, most of these positions became hereditary, and their role in the running of the household was gradually eroded. In England, for instance, the Lord Great Chamberlain and the Earl Marshal were originally responsible for the running of the royal household and the royal stables respectively; however, from the late medieval period onwards, their roles became largely honorary, their places in the household being taken by the Lord Chamberlain and the Master of the Horse.

The Grand Almoner of France was an officer of the French monarchy and a member of the Maison du Roi during the Ancien Régime. He directed the religious branch of the royal household also known as the Royal Chapel.

A diaconia was originally an establishment built near a church building, for the care of the poor and distribution of the church's charity in medieval Rome or Naples. Examples included the sites of San Vito, Santi Alessio e Bonifacio, and Sant'Agatha in Rome, San Gennaro in Naples (headed by a deacon named John in the end of the ninth and the beginning of the tenth century.

In Craft Freemasonry, sometimes known as Blue Lodge Freemasonry, every Masonic lodge elects or appoints Masonic lodge officers to execute the necessary functions of the lodge's life and work. The precise list of such offices may vary between the jurisdictions of different Grand Lodges, although certain factors are common to all, and others are usual in most.

A chamberlain is a senior royal official in charge of managing a royal household. Historically, the chamberlain superintends the arrangement of domestic affairs and was often also charged with receiving and paying out money kept in the royal chamber. The position was usually honoured upon a high-ranking member of the nobility (nobleman) or the clergy, often a royal favourite. Roman emperors appointed this officer under the title of cubicularius. The papal chamberlain of the Pope enjoys very extensive powers, having the revenues of the papal household under his charge. As a sign of their dignity, they bore a key, which in the seventeenth century was often silvered, and actually fitted the door-locks of chamber rooms. Since the eighteenth century, it has turned into a merely symbolic, albeit splendid, rank-insignia of gilded bronze. In many countries there are ceremonial posts associated with the household of the sovereign.

Xavier de Mérode was a Belgian prelate, archbishop and statesman of the Papal states.

John Gunthorpe was an English administrator, Clerk of the Parliament, Keeper of the Privy Seal and Dean of Wells. 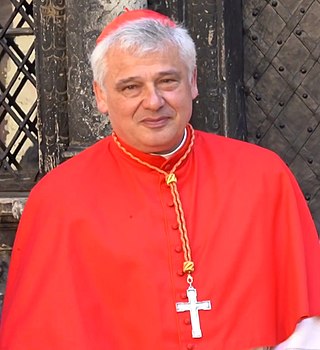 Konrad Krajewski is a Polish cardinal of the Catholic Church. He was a papal master of ceremonies from 1998 to 2013. In 2013 he was appointed as the papal almoner.

Saylani Welfare International Trust is a non-government organization (NGO) focusing primarily on feeding the poor and homeless. It was established in May 1999 and is headquartered at Bahdurabad, Karachi, Pakistan.

Alamgir Welfare Trust is a social welfare organization and charity in Karachi, Pakistan which provides services in a wide variety of domains including health, education and feeding the underprivileged, etc. It was established in 1993 and is headquartered at Bahadurabad, Karachi.