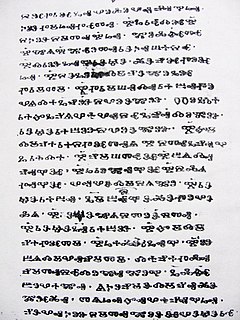 The Glagolitic script is the oldest known Slavic alphabet. It is generally agreed to have been created in the 9th century by Saint Cyril, a Byzantine monk from Thessaloniki. He and his brother, Saint Methodius, were sent by the Byzantine Emperor Michael III in 863 to Great Moravia to spread Christianity among the West Slavs in the area. The brothers decided to translate liturgical books into the contemporary Slavic language understandable to the general population. As the words of that language could not be easily written by using either the Greek or Latin alphabets, Cyril decided to invent a new script, Glagolitic, which he based on the local dialect of the Slavic tribes from the Byzantine theme of Thessalonica. 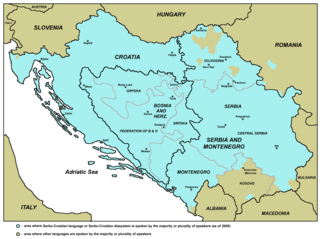 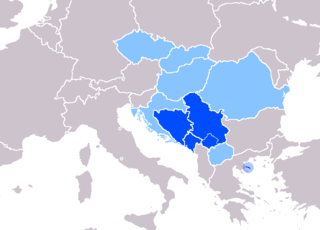 Serbian is the standardized variety of the Serbo-Croatian language mainly used by Serbs. It is the official language of Serbia, co-official in the territory of Kosovo, and one of the three official languages of Bosnia and Herzegovina. In addition, it is a recognized minority language in Montenegro, where it is spoken by the relative majority of the population, as well as in Croatia, North Macedonia, Romania, Hungary, Slovakia, and the Czech Republic.

The grapheme Čč is used in various contexts, usually denoting the voiceless postalveolar affricate consonant like the English ch in the word chocolate. It is represented in Unicode as U+010C and U+010D.

The grapheme Ć, formed from C with the addition of an acute accent, is used in various languages. It usually denotes, the voiceless alveolo-palatal affricate, including in phonetic transcription. Its Unicode codepoints are U+0106 for Ć and U+0107 for ć.

The Illyrian movement was a pan-South-Slavist cultural and political campaign with roots in the early modern period, and revived by a group of young Croatian intellectuals during the first half of the 19th century, around the years of 1835–1863. This movement aimed to create a Croatian national establishment in Austria-Hungary through linguistic and ethnic unity, and through it lay the foundation for cultural and linguistic unification of all South Slavs under the revived umbrella term Illyrian.

The Serbian Cyrillic alphabet or Serbian Azbuka is an adaptation of the Cyrillic script for Serbo-Croatian language, developed in 1814 by Serbian linguist Vuk Karadžić. It is one of the two alphabets used to write standard modern Serbian and Bosnian, the other being Latin. 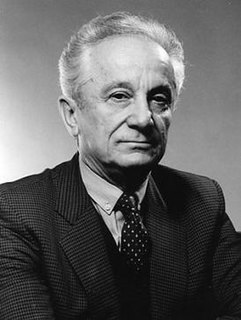 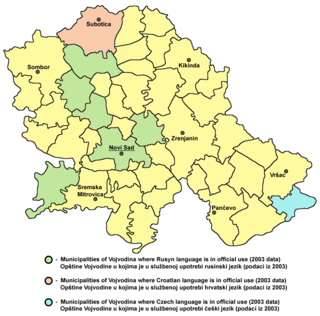 Croatian sign language is a sign language of the deaf community in Croatia. It has in the past been regarded as a dialect of Yugoslav Sign Language, although the dialectical diversity of the former Yugoslavia has not been assessed.