At the start of the reign of King Æthelstan in 924, Alphege was a member of his household, one of his mass priests, who were probably responsible for looking after his relics. Early in Æthelstan's reign, Alphege witnessed his manumission of a slave called Ealdred, and he also attested a charter on the day of Æthelstan's coronation, 4 September 925. He was appointed Bishop of Wells in succession to Wulfhelm, who had been translated to the Archbishopric of Canterbury. [3]

Æthelstan or Athelstan was King of the Anglo-Saxons from 924 to 927 and King of the English from 927 to 939 when he died. He was the son of King Edward the Elder and his first wife, Ecgwynn. Modern historians regard him as the first King of England and one of the "greatest Anglo-Saxon kings". He never married and had no children. He was succeeded by his half-brother, Edmund I. 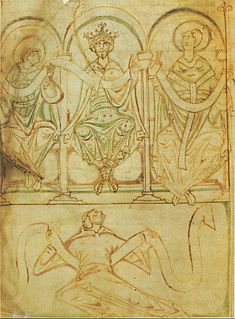 Æthelwold of Winchester was Bishop of Winchester from 963 to 984 and one of the leaders of the tenth-century monastic reform movement in Anglo-Saxon England.

Wulfhelm was Bishop of Wells before being promoted to the Archbishopric of Canterbury about 926. Nothing is known about his time at Wells, but as archbishop he helped codify royal law codes and gave lands to monasteries. He went to Rome soon after his selection as archbishop. Two religious books that he gave to his cathedral are still extant.

Wigred was appointed Bishop of Chester-le-Street around 925. He was also known as the Bishop of the Church of St Cuthbert. He attested charters of King Æthelstan between 928 and 934, and the bishopric in his time was probably the greatest landholder between the Tees and the Tyne.

Ælfheah the Bald is the commonly used name for Ælfheah, the first English Bishop of Winchester of that name. He is sometimes known as Alphege, an older translation of his Old English name.

Koenwald was an Anglo-Saxon Bishop of Worcester, probably of Mercian origin.

Elphege was a medieval Bishop of Lichfield.

Æthelstan was a medieval Bishop of Hereford.

Theodred was a medieval Bishop of London.

Frithestan was the Anglo-Saxon Bishop of Winchester from 909 until his resignation in 931.

Ælfsige was a medieval Bishop of Winchester. He was consecrated between 1012 and 1013. He died in 1032. In his will, he named Ealdorman Ælfheah as the guardian of his relatives and his last testament, as well as an estate at Crondall.

Aethelstan was a medieval Bishop of Ramsbury.

Ælfwine or Ælle was a medieval Bishop of Lichfield. He was consecrated between 903 and 915 and died between 935 and 941.

Beornstan was an English Bishop of Winchester. He was consecrated in May 931. He died on 1 November 934. After his death, he was revered as a saint.