The Alpine orogeny or Alpide orogeny[ dubious – discuss ] is an orogenic phase in the Late Mesozoic [1] (Eoalpine) and the current Cenozoic that has formed the mountain ranges of the Alpide belt.

The cause of Alpine orogeny

The Alpine orogeny is caused by the continents Africa and India and the small Cimmerian plate colliding (from the south) with Eurasia in the north. Convergent movements between the tectonic plates (the Indian plate and the African plate from the south, the Eurasian plate from the north, and many smaller plates and microplates) had already begun in the early Cretaceous, but the major phases of mountain building began in the Paleocene to Eocene. The process continues currently in some of the Alpide mountain ranges.[ citation needed ]

The Alpine orogeny is considered one of the three major phases of orogeny in Europe that define the geology of that continent, along with the Caledonian orogeny that formed the Old Red Sandstone Continent when the continents Baltica and Laurentia collided in the early Paleozoic, and the Hercynian or Variscan orogeny that formed Pangaea when Gondwana and the Old Red Sandstone Continent collided in the middle to late Paleozoic.[ citation needed ]

These mountains include (from west to east) the Atlas, the Rif, the Baetic Cordillera, the Cantabrian Mountains, the Pyrenees, the Alps, the Apennine Mountains, the Dinaric Alps, the Pindus (Hellenides), the Carpathians, the Balkanides (the Balkan Mountains and Rila-Rhodope massifs), the Pontic Mountains, the Taurus, the Armenian Highlands, the Caucasus, the Alborz, the Zagros, the Hindu Kush, the Pamir, the Karakoram, and the Himalayas. [2]

The Alpine orogeny has also led to the formation of more distant and smaller geological features such as the Weald–Artois Anticline in Southern England and northern France, the remains of which can be seen in the chalk ridges of the North and South Downs in southern England. Its effects are particularly visible on the Isle of Wight, where the Chalk Group and overlying Eocene strata are folded to near-vertical, as seen in exposures at Alum Bay and Whitecliff Bay, and on the Dorset coast near Lulworth Cove. [3] Stresses arising from the Alpine orogeny caused the Cenozoic uplift of the Sudetes mountain range [4] and possibly faulted rocks as far away as Öland in southern Sweden during the Paleocene. [5]

The Sudetes, are a mountain range in Central Europe, shared by Germany, Poland and the Czech Republic. They are the highest part of Bohemian Massif. They stretch from the Saxon capital of Dresden in the northwest across to the region of Lower Silesia in Poland and to the Moravian Gate in Czechia in the east. Geographically the Sudetes are a Mittelgebirge with some characteristics typical of high mountains. Its plateaus and subtle summit relief makes the Sudetes more akin to mountains of Northern Europe than to the Alps.

The Laramide orogeny was a time period of mountain building in western North America, which started in the Late Cretaceous, 70 to 80 million years ago, and ended 35 to 55 million years ago. The exact duration and ages of beginning and end of the orogeny are in dispute. The Laramide orogeny occurred in a series of pulses, with quiescent phases intervening. The major feature that was created by this orogeny was deep-seated, thick-skinned deformation, with evidence of this orogeny found from Canada to northern Mexico, with the easternmost extent of the mountain-building represented by the Black Hills of South Dakota. The phenomenon is named for the Laramie Mountains of eastern Wyoming. The Laramide orogeny is sometimes confused with the Sevier orogeny, which partially overlapped in time and space. 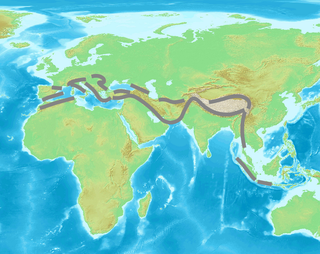 The Alpide belt or Alpine-Himalayan orogenic belt, or more recently and rarely the Tethyan orogenic belt, is a seismic and orogenic belt that includes an array of mountain ranges extending for more than 15,000 kilometres (9,300 mi) along the southern margin of Eurasia, stretching from Java and Sumatra, through the Indochinese Peninsula, the Himalayas and Transhimalayas, the mountains of Iran, Caucasus, Anatolia, the Mediterranean, and out into the Atlantic. It includes, from west to east, the major ranges of the Atlas Mountains, the Alps, the Caucasus Mountains, Alborz, Hindu Kush, Karakoram, and the Himalayas. It is the second most seismically active region in the world, after the circum-Pacific belt, with 17% of the world's largest earthquakes. 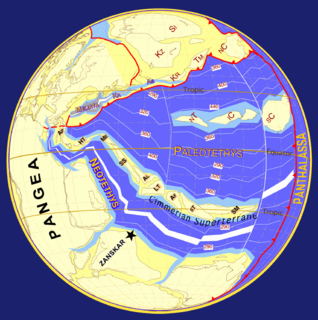 Cimmeria was an ancient continent, or, rather, a string of microcontinents or terranes, that rifted from Gondwana in the Southern Hemisphere and was accreted to Eurasia in the Northern Hemisphere. It consisted of parts of present-day Turkey, Iran, Afghanistan, Pakistan, Tibet, China, Myanmar, Thailand, and Malaysia. Cimmeria rifted from the Gondwanan shores of the Paleo-Tethys Ocean during the Carboniferous-earliest Permian and as the Neo-Tethys Ocean opened behind it, during the Permian, the Paleo-Tethys closed in front of it. Cimmeria rifted off Gondwana from east to west, from Australia to the eastern Mediterranean. It stretched across several latitudes and spanned a wide range of climatic zones. 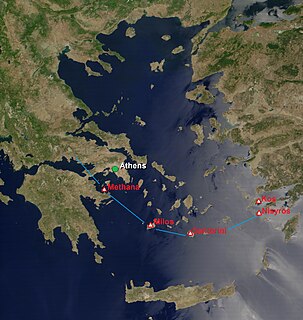 The South Aegean Volcanic Arc is a volcanic arc in the South Aegean Sea formed by plate tectonics. The prior cause was the subduction of the African plate beneath the Eurasian plate, raising the Aegean arc across what is now the north Aegean Sea. It was not yet the sea, nor an arc, or at least not the one it is today, nor was there a chain of volcanoes. In the Holocene the process of back-arc extension began, probably stimulated by pressure from the Arabian Plate compressing the region behind the arc. The extension deformed the region into its current configuration. First, the arc moved to the south and assumed its arcuate configuration. Second, the Aegean Sea opened behind the arc because the crust was thinned and weakened there. Third, magma broke through the thinned crust to form a second arc composed of a volcanic chain. And finally, the Aegean Sea Plate broke away from Eurasia in the new fault zone to the north.

The geology of the North Sea describes the geological features such as channels, trenches, and ridges today and the geological history, plate tectonics, and geological events that created them. 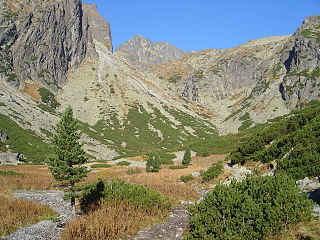 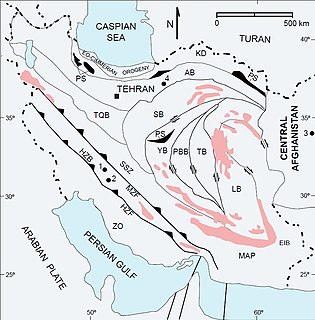 The North Sea basin is located in northern Europe and lies between the United Kingdom, and Norway just north of The Netherlands and can be divided into many sub-basins. The Southern North Sea basin is the largest gas producing basin in the UK continental shelf, with production coming from the lower Permian sandstones which are sealed by the upper Zechstein salt. The evolution of the North Sea basin occurred through multiple stages throughout the geologic timeline. First the creation of the Sub-Cambrian peneplain, followed by the Caledonian Orogeny in the late Silurian and early Devonian. Rift phases occurred in the late Paleozoic and early Mesozoic which allowed the opening of the northeastern Atlantic. Differential uplift occurred in the late Paleogene and Neogene. The geology of the Southern North Sea basin has a complex history of basinal subsidence that had occurred in the Paleozoic, Mesozoic, and Cenozoic. Uplift events occurred which were then followed by crustal extension which allowed rocks to become folded and faulted late in the Paleozoic. Tectonic movements allowed for halokinesis to occur with more uplift in the Mesozoic followed by a major phase of inversion occurred in the Cenozoic affecting many basins in northwestern Europe. The overall saucer-shaped geometry of the southern North Sea Basin indicates that the major faults have not been actively controlling sediment distribution. 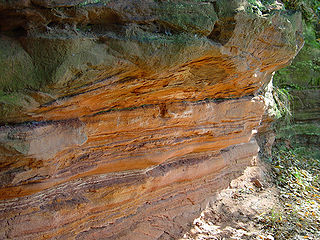 The geology of Ohio formed beginning more than one billion years ago in the Proterozoic eon of the Precambrian. The igneous and metamorphic crystalline basement rock is poorly understood except through deep boreholes and does not outcrop at the surface. The basement rock is divided between the Grenville Province and Superior Province. When the Grenville Province crust collided with Proto-North America, it launched the Grenville orogeny, a major mountain building event. The Grenville mountains eroded, filling in rift basins and Ohio was flooded and periodically exposed as dry land throughout the Paleozoic. In addition to marine carbonates such as limestone and dolomite, large deposits of shale and sandstone formed as subsequent mountain building events such as the Taconic orogeny and Acadian orogeny led to additional sediment deposition. Ohio transitioned to dryland conditions in the Pennsylvanian, forming large coal swamps and the region has been dryland ever since. Until the Pleistocene glaciations erased these features, the landscape was cut with deep stream valleys, which scoured away hundreds of meters of rock leaving little trace of geologic history in the Mesozoic and Cenozoic.

The geology of Wyoming includes some of the oldest Archean rocks in North America, overlain by thick marine and terrestrial sediments formed during the Paleozoic, Mesozoic and Cenozoic, including oil, gas and coal deposits. Throughout its geologic history, Wyoming has been uplifted several times during the formation of the Rocky Mountains, which produced complicated faulting that traps hydrocarbons. 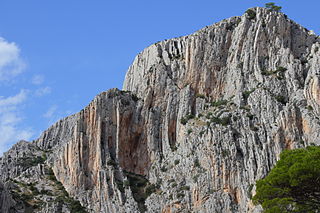 The geology of Croatia has some Precambrian rocks mostly covered by younger sedimentary rocks and deformed or superimposed by tectonic activity.

The Hellenic orogeny is a collective noun referring to multiple mountain building events that shaped the topography of the southern margin of Eurasia into what is now Greece, the Aegean Sea and western Turkey, beginning in the Jurassic. Prior to then the supercontinent, Pangaea, had divided along a divergent boundary into two continents, Gondwana land and Laurasia, separated by a primordial ocean, Paleo-Tethys Ocean. As the two continents continued to break up, Gondwana, pushed by divergent boundaries developing elsewhere, began to drift to the north, closing the sea. As it went it split off a number of smaller land masses, terranes, which preceded it to the north. The Hellenic orogeny is the story of the collision first of these terranes and then of Gondwana, reduced to Africa, with Eurasia, and the closing of Tethys to the Mediterranean. The process has been ongoing since the Jurassic and continues today.