Altona (German: [ˈaltonaː] ( listen )) is the westernmost urban borough (Bezirk) of the German city state of Hamburg, on the right bank of the Elbe river. From 1640 to 1864 Altona was under the administration of the Danish monarchy. Altona was an independent city until 1937. In 2016 the population was 270,263.

Altona was founded in 1535 as a village of fishermen in then Holstein-Pinneberg. In 1640, Altona came under Danish rule as part of Holstein-Glückstadt, and in 1664 received city rights from Danish King Frederik III. Then ruled in personal union as duke of Holstein, Altona was one of the Danish monarchy's most important harbor towns. The railroad from Altona to Kiel, the Hamburg-Altona–Kiel railway (Danish: Christian VIII Østersø Jernbane), was opened in 1844.

Because of severe restrictions on the number of Jews allowed to live in Hamburg until 1864 (with the exception of 1811–15), [1] a major Jewish community developed in Altona starting in 1611, when Count Ernest of Schaumburg and Holstein-Pinneberg granted the first permanent residence permits to Ashkenazic Jews. [2] Members did business both in Hamburg and in Altona itself. All that remains after the Nazi Holocaust during World War II are the Jewish cemeteries, but in the 17th, 18th and 19th centuries, the community was a major center of Jewish life and scholarship. The Holstein-Pinneberg and later Danish Holstein had lower taxes and placed fewer civil impositions on their Jewish community than did the government of Hamburg.

In 1871 Altona became a part of the German Empire. In the same year the city was hit by cholera, with a minimum of 16 casualties in Altona. [3]

During the Weimar era following World War I, the city of Altona was disturbed by major labor strikes and street disorders. Inflation in Germany was a major problem. In 1923 Max Brauer, the mayor of Altona, directed that city personnel be paid in part with gas meter tokens, as these coins did not lose value from inflation. [4] The most notable event at this time is the Altona Bloody Sunday (German: Altonaer Blutsonntag) on July 17, 1932, when several persons were shot by the police force which was providing security for a demonstration of Nazi groups. After police raids and a special court, on August 1, 1933 Bruno Tesch and others were found guilty and put to death by beheading with a hand-held axe. [5] [6] In the 1990s, the Federal Republic of Germany reversed the convictions of Tesch and the other men who were put to death, clearing their names.

The Greater Hamburg Act removed Altona from the Free State of Prussia in 1937 and merged it (and several surrounding cities) with the Free and Hanseatic City of Hamburg in 1938.

On 1 February 2007 the Ortsämter (precincts) in Hamburg were dissolved. In Altona the precincts of Blankenese, Lurup and Osdorf had existed and had local offices. On 1 March 2008 the Schanzenviertel neighborhood, which had spanned across parts of the boroughs of Altona, Eimsbüttel and Hamburg-Mitte, became the Sternschanze quarter, the entirety of which is now in the Altona borough. [7]

The border of Altona to the south is the River Elbe, and across the river the state Lower Saxony and the boroughs Harburg and Hamburg-Mitte. To the east is the borough Hamburg-Mitte and to the north is the borough Eimsbüttel. The western border is with the state of Schleswig-Holstein. According to the statistical office of Hamburg, the area of Altona is 77.5 km² or 29.9 sq mi in 2006.

There are 195 kindergartens and 31 primary schools in Altona as well as 879 physicians in private practice, 254 dentists and 60 pharmacies. [8]

Simultaneously with elections to the state parliament (Bürgerschaft), the Bezirksversammlung is elected as representatives of the citizens. It consists of 51 representatives.

Elections were held in Hamburg on 20 February 2011. The five parties having more than 5 percent in recent polls (minimum to qualify) are the conservative CDU, the social-democratic SPD, the ecologist Green Party (GAL), the left-wing Die Linke and the liberal Free Democratic Party (FDP).

Altona is the location of a major railway station, Hamburg-Altona, connecting the Hamburg S-Bahn with the regional railways and local bus lines.

The A 7 autobahn passes through Altona borough.

According to the Department of Motor Vehicles (Kraftfahrt-Bundesamt), in Altona 87,131 private cars were registered (359 cars per 1000 people). [9]

Hamburg, officially the Free and Hanseatic City of Hamburg, is the second-largest city in Germany after Berlin and 7th largest city in the European Union with a population of over 1.84 million. 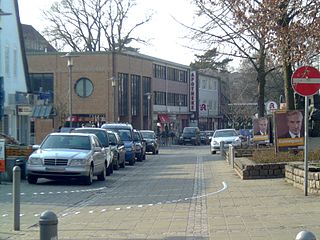 Rissen is a quarter of the city of Hamburg in Germany. It is located in the borough of Altona and is the westernmost quarter in the Hamburg, bordering the German federal state of Schleswig-Holstein in the west, north, and northeast and the Elbe river to the south. In 2016, the population was 15,000.

Blankenese is a suburban quarter in the borough of Altona in the western part of Hamburg, Germany; until 1938 it was an independent municipality in Holstein. It is located on the right bank of the Elbe river. With a population of 13,407 as of 2016, today it is widely known as one of Hamburg's most affluent neighborhoods. 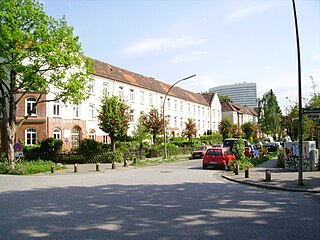 Bahrenfeld (help·info) is a western quarter of the city of Hamburg in Germany, it is subject to the district/borough Bezirk Altona and was an independent settlement until 1890. It is home to DESY and the Barclaycard Arena. In 2016 the population was 31,047.

The city of Hamburg in Germany is made up of seven boroughs and subdivided into 104 quarters. Most of the quarters were former independent settlements. As of 2008 the areal organisation is regulated by the constitution of Hamburg and several laws.

Hamburg-Mitte is one of the seven boroughs of Hamburg, Germany, covering most of the city's urban center. The quarters of Hamburg-Altstadt and Neustadt cover much of the city's historic core. In 2016 the population was 301,550.

Othmarschen is a quarter in the Altona borough of the Hamburg in northern Germany. In 2016 the population was 14,893.

Eimsbüttel (help·info) is one of the 104 quarters in the Eimsbüttel borough of Hamburg, Germany. In 2016 the population was 57,055.

Nienstedten is a quarter in the city of Hamburg, Germany. It belongs to the Altona borough on the right bank of the Elbe river. Nienstedten is home to the International Tribunal for the Law of the Sea. In 2016 the population was 7,238.

Lurup (help·info) is a quarter in the Altona borough of the Free and Hanseatic city of Hamburg in northern Germany. It was formerly an independent village. In 2016 the population was 36,053.

Klein Flottbek railway station is on the Altona-Blankenese line and serviced by the Hamburg city trains. Rapid transit trains of lines S1 and S11 of the Hamburg S-Bahn call at the station in the Klein Flottbek subdistrict in the Nienstedten quarter of Altona borough in Hamburg, Germany. The track forms the border of the Osdorf quarter. 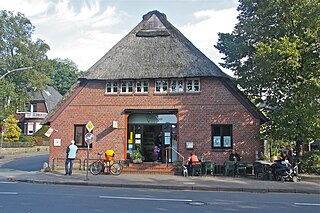 Osdorf is a quarter in the city of Hamburg, Germany. It belongs to the Altona borough. In 2016 the population was 26,140.

Rotherbaum is a quarter of Eimsbüttel, a borough of Hamburg, Germany. In 2016 the population was 16,456.

Iserbrook (help·info) is a district in the borough of Altona within the Free and Hanseatic City of Hamburg in North Germany. In 2016 its population was 11,324.

The Altona-Kiel Railway Company was a joint-stock company, established under the law of Denmark in personal union with the Duchy of Holstein, that built and operated an 105 km railway line between Altona and the Baltic Sea port city of Kiel. Altona was at that time the second largest city under Danish rule and the railway line was the first built in Danish-controlled territory.

The Altona–Blankenese railway is a railway line to the west of Hamburg. It starts at the Altona station and runs through Othmarschen to Blankenese station. This section of line was opened in 1867. 16 years later the line was extended to Wedel. It is now used by lines S1 and S11 of the Hamburg S-Bahn and was part of the first electrified suburban railway in Germany.

Groß Flottbek, is a quarter of Hamburg, Germany, in the borough of Altona. It is located in the center of the borough north of the Othmarschen quarter. Near Groß Flottbek, the neighbourhood of Klein Flottbek, which is not an official quarter, can be found. Around 11.000 people live in Groß Flottbek on 2.4 sq km. 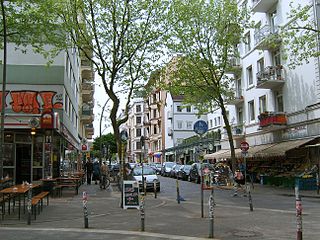 Sternschanze is a quarter in the center of Hamburg (Germany) within the Altona borough. In 2014, the population was 7,776 on an area of 0.6 sq km with a density of 14,113 inhabitants per sq km. After Reeperbahn, it's Hamburg's best known entertainment and nightlife district. It is also known as Schanzenviertel and nicknamed Schanze.

Klein Flottbek is a sub-urban district and neighbourhood in the quarters of Nienstedten, Othmarschen and Osdorf, located in the Altona borough of Hamburg, Germany. Unlike neighbouring Groß Flottbek, the former municipality of Klein Flottbek is not an official quarter of Hamburg today.